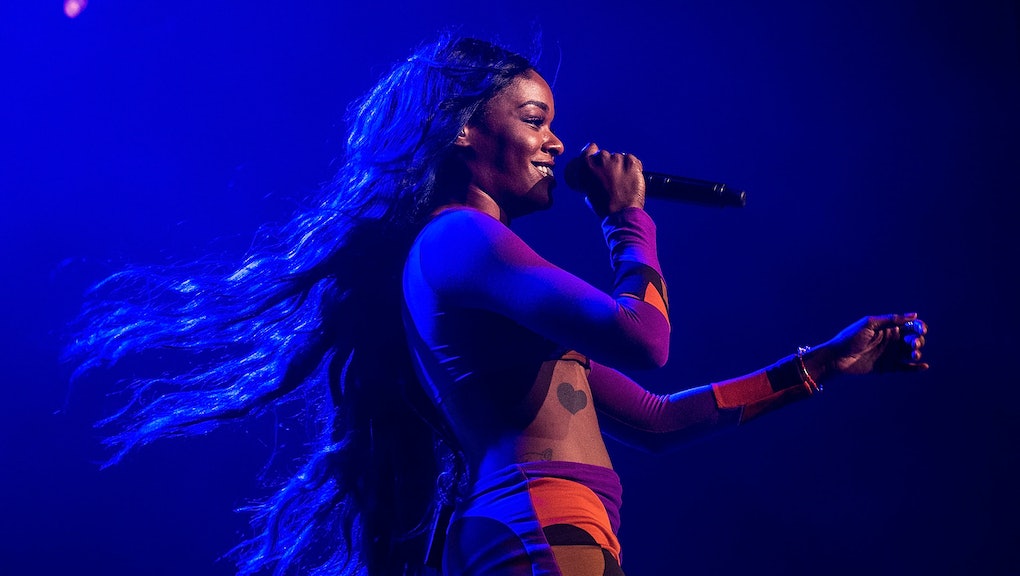 Azealia Banks flip-flops one last time to praise Donald Trump: "Proud as f*ck of you"

Once one of hip-hop's most promising free-thinkers, with every day that passes Azealia Banks seems to bend into a gnarlier troll. The day after the United States of America chose Donald Trump — a candidate she's alternatingly praised and criticized — to be its next president, Banks flip-flopped one last time to deliver a hearty congratulations to the man via Instagram.

"I'm fucking proud as FUCK of you," Banks wrote. "I must say that I am TRULY inspired by this and feel deep amounts of vindication. Thanks for letting me know that I'm not crazy (even though I fronted a few times) liberals run hollywood and it's been a COLD WORLD OUT HERE FOR ME AS A TRUMP SUPPORTER."

Banks originally came out in favor of Trump in February in a Twitter rant, before she was banned from the platform in May after hurling racist epithets at Zayn Malik.

"I think Trump is the only one who truly has the balls to bust up big business," she wrote in since unreadable tweets. "Hillary is too tied in with them and Bernie has no clout."

And later: "I only trust this country to be what it is: full of shit. Takes shit to know shit so we may as well, put a piece of shit in the White House."

In October, she changed her tune, right as she was on the verge of signing a record deal with the Wu-Tang Clan's RZA. "I made a major mistake endorsing toupey-toupee," she wrote. "Women's rights are important and we must protect them."

And now she's attempting to get back in Trump's good graces. She's been battling those who have pushed back against her all morning.

"Y'all need to RELAX, the democrats have been playing on your fear to convince you to vote for them," Banks wrote on Facebook. "Stop being scared !!! I truly feel bad because Hillary supporters are actually good people. But honestly, she has been using the media to prey on your fears to SCARE you into voting for her."

Her words drip with a sense of irony, as even a casual glimpse over the rhetoric from the Trump campaign shows a candidate willing to paint a skewed, cataclysmic picture of a collapsing culture and economy in order to encourage the rural and the uneducated to vote for a pipe dream — or rather, a wall dream.

It's difficult to see exactly how Banks' thrill at seeing Trump "beat the media" will work in her favor, yet Banks has been more perceptive than so many pundits who never thought a reality TV star with no political experience could win a presidency. Know that she'll be gloating about it all the way to the bank.