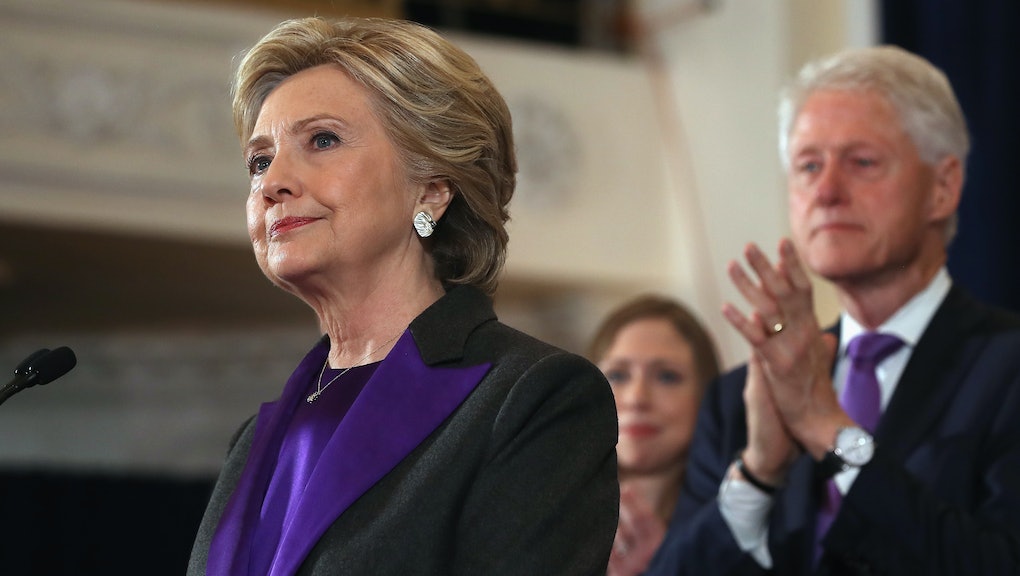 During a brief but poignant speech early Wednesday, Democratic nominee for president Hillary Clinton took the stage at the New Yorker Hotel in midtown Manhattan to offer her concession to Donald Trump.

"This is painful, and it will be for a long time, but I want you to remember that our campaign was never about one person or even one election. It was about the country we love and about building an America that's hopeful, inclusive and big hearted," Clinton remarked to a crowd of loyal campaign staff and supporters.

Clinton, along with her husband former President Bill Clinton, wore a color seldom seen on Clinton throughout her whirlwind campaign: purple. That choice, certainly no accident, has several meanings, all a statement each their own.

Purple is, after all, a combination of both red and blue, a symbol of bipartisanship and unity in what may be fraught, divisive times ahead.

"I couldn't help but notice it," one CNN analyst offered. "It's the color of spirituality; it's the color of mourning; it's the color of mystery. I can't believe it was an accident that both Hillary Clinton and former President Bill Clinton were wearing purple in this remarkable moment that was a tableau of the Clintons and the best of what they stand for."

It also could be interpreted as a nod to the suffragette movement, whose color scheme included purple, white and green. "Purple as everyone knows is the royal color, it stands for the royal blood that flows in the veins of every suffragette, the instinct of freedom and dignity," wrote Emmeline Pethick-Lawrence, editor of the weekly newspaper Votes for Women.

Throughout her storied campaign, Clinton used fashion to show her growing confidence, and today, used it to communicate a message of unity, sovereignty and, for many, mourning.