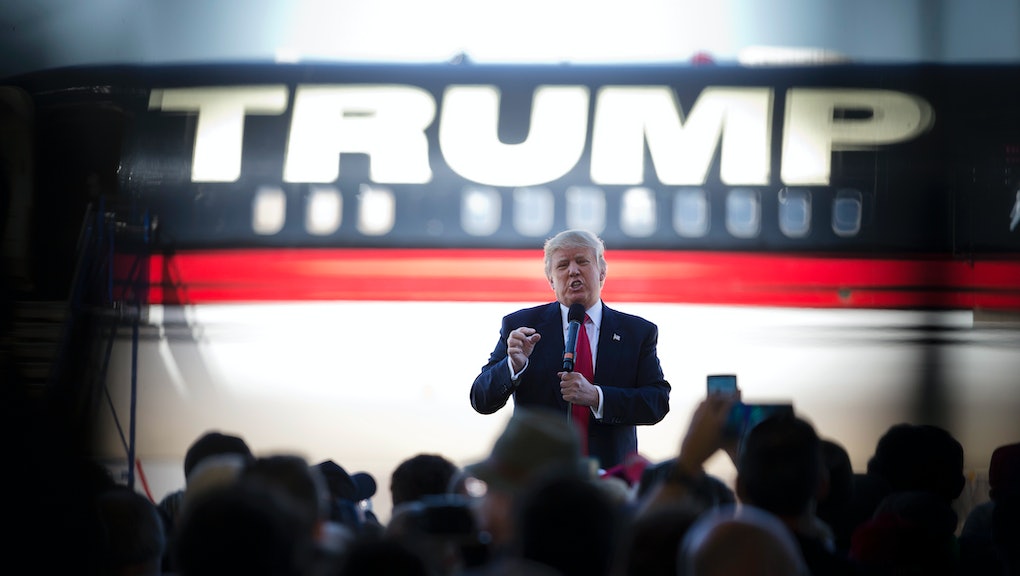 Can Trump be impeached? Maybe — but don't get your hopes up.

The people have spoken, and it's happened: Donald Trump is president-elect of the United States. Now, before the dust has settled on this long campaign, disgruntled voters are already dreaming of an impeachment trial.

In the early hours of Wednesday morning, Google searches for "impeachment" spiked (as, Google Trends shows, they are wont to do every Election Day), so here's a rundown of how the constitutional process works.

According to Article II of the U.S. Constitution, presidents may be impeached if they are convicted of "treason, bribery or other high crimes and misdemeanors." The impeachment process consists first of a vote by the House of Representatives, in which it decides if there are grounds to impeach the president, followed by a formal impeachment trial in the United States Senate.

While questions of impeachment before a president takes the oath of office might seem to be a long shot for most presidents elect, it appears to be slightly more within the realm of possibility for Trump, who's currently embroiled in a number of legal battles and will go to trial for alleged fraud involving Trump University later this month. In an essay published before the election, University of Utah law professor Christopher Lewis Peterson claimed that there could be grounds for Trump to be impeached prior to the election for these alleged Trump University crimes, writing:

"Unlike his promised crimes yet to come, the illegal acts in Trump's high-pressure wealth seminars have already occurred. Indeed, a federal judge appointed under Article III of the U.S. Constitution has already determined that Trump's alleged actions, if true, constitute fraud and racketeering ... [Prior to Trump's inauguration,] Congress would be well within its legal rights under the Constitution to insist upon a president who is not a fraudster or a racketeer as defined in its own law."

Whether this preemptive impeachment will actually come to pass seems unlikely, though. It's still legally unclear whether it's possible to impeach presidents for crimes that happened before they took office, and it remains to be seen how the Trump University trial will be resolved. The Republican-controlled Congress also isn't likely to challenge Trump's presidency as it prepares to gain control of both the executive and legislative branches.

Once Trump has taken office, though, it's possible that new grounds for impeachment will arise. Speaking to Politico in April, Washington attorney Bruce Fein forecasted 50-50 odds that Trump would commit impeachable offenses as president. Those odds could go up in the event that Democrats take back the House or Senate during the 2018 midterm elections, though depending on how Trump behaves once in the White House, it may be too soon to say how current Republican legislators — many of whom opposed Trump's candidacy — will react to how he wields his power as commander in chief. The Federalist has suggested a conspiracy in which the Republican-controlled Congress could choose to impeach Trump in order to promote current Vice President-elect Mike Pence.

However, it's the fact that Pence is currently second in line to the presidency that should give Democrats hoping for an impeachment some pause. While the campaign trail has shown Trump to be a uniquely dangerous president-elect to the rights of women, immigrants, people of color, the disabled and the LGBTQ population, he's also an unproven politician whose main concern isn't entirely clear.

However, ultra-conservative Pence, whose tenure as governor of Indiana was widely criticized by his constituents, supports such extreme measures as gay conversion therapy and forcing women who have had an abortion or miscarriage to seek funerary services for the fetus. With significant political experience, Pence knows how to turn his conservative beliefs into real legislation. So while Democrats may be looking for a way out after the results of this contentious election, if an impeachment does actually happen, it may not be the panacea for the national nightmare that liberals hope.