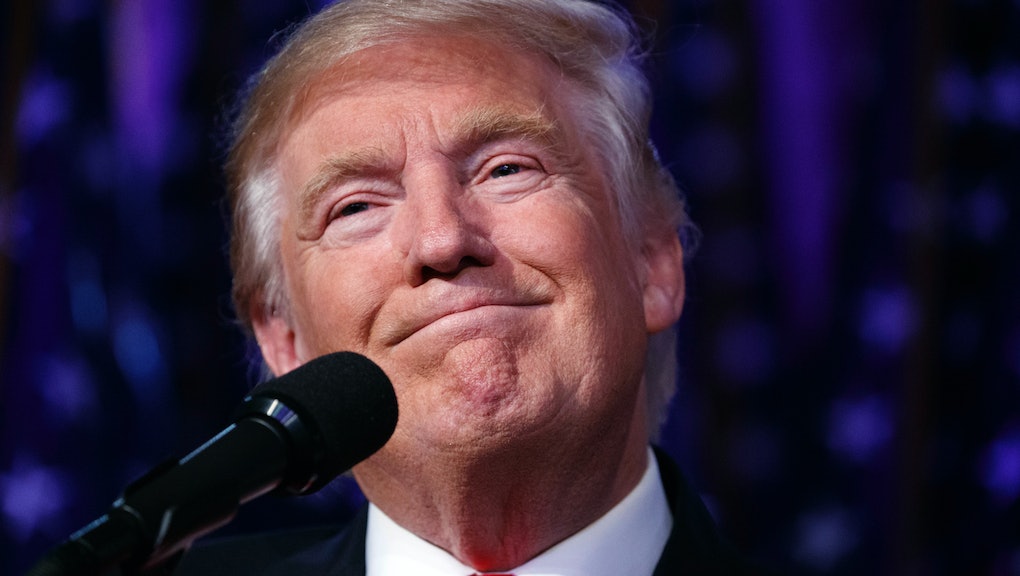 Can Donald Trump ban all Muslims? Here's what to know about his awful proposition.

In electing Donald Trump to the presidency, Americans effectively endorsed a ban on Muslims entering the United States — a promise the former businessman made repeatedly over the course of his campaign.

The Pew Research Center estimated that as of 2015 roughly 3.3 million Muslims lived in the U.S. — a relatively small segment of the overall population, but a huge number of lives that would be devastated if Trump were to follow through with his stated plan.

For a time on Thursday, the statement on Trump's campaign website calling for a "total and complete shutdown" of Muslims entering the U.S. mysteriously disappeared, but was eventually restored. What never changed were the general statements on tracking and vetting on Trump's immigration page. The question remains: Can Trump ban all Muslims from entering the United States — and can he target the millions of Muslims already living here?

To do so would probably be illegal, but a government-issued ban on specific groups of people is, unfortunately, not unprecedented in the U.S.

Nearly a year ago, Trump issued his now-infamous call for a "total and complete shutdown" on Muslims entering the United States.

"Without looking at the various polling data, it is obvious to anybody the hatred is beyond comprehension," Trump explained at the time. "Where this hatred comes from and why we will have to determine. Until we are able to determine and understand this problem and the dangerous threat it poses, our country cannot be the victims of horrendous attacks by people that believe only in jihad, and have no sense of reason or respect for human life."

Since then, he has gone on the record saying "Islam hates us." He has hammered on the subject of profiling Muslims. He has introduced the concept of "extreme vetting" that would bar people from "territories" with terrorism in their past from entering the U.S., apparently in an effort to avoid saying he'd be banning a specific group of people outright. To target a particular group of people for their religious beliefs would, of course, violate the First Amendment.

Certainly, the Trump presidency will be a test of the Constitution. But by shifting the focus away from Islam as a religion and onto country of origin, Trump might have an easier time finding precedent, Reuters reported in June.

There's the Chinese Exclusion Act of 1882, for example, which halted emigration from China to the U.S. for a decade and barred Chinese people from becoming U.S. citizens. It was extended in 1892 to last another 10 years, during which time Chinese immigrants already in the U.S. had to carry identification per the Geary Act. Congress renewed the ban again in 1902, after which point Chinese immigration became illegal. It stayed that way until 1943.

The act was pitched as a defense of American jobs, but in reality, it was motivated by the desire to defend the "racial purity" of the country's white population. Sound familiar?

Echoes of the Chinese Exclusion Act can be heard in the internment of Japanese-Americans under Franklin Delano Roosevelt during World War II, wherein more than 100,000 people were rounded up and thrown in camps on the basis of their origin alone. Trump has mused aloud that internment — now widely regarded as a stain on our national history — might just have been the right thing to do, considering that it was wartime and all.

Another period that could set a precedent for Trump's proposed Muslim ban happened during Jimmy Carter's presidency, when Carter halted the issuance and renewal of visas for immigrants from Iran during the Iran Hostage Crisis. But the comparison, according to Politifact, ignores important nuance: Carter mandated that humanitarian concerns be considered in individual cases, and he addressed nationals rather than an entire religion.

According to Politifact, "Carter was ratcheting up political pressure in a fairly traditional process of crisis management" as more than 60 Americans were held hostage for 444 days.

Unfortunately, Trump wouldn't need justification. As Vox reported, there exists a clause within the 1952 Immigration and Nationality Act that leaves the matter of "excludable aliens" entirely up to executive power. Under this act, Trump can bar any group of immigrants from entry if he "finds" that group "detrimental," and he can "impose on the entry of aliens any restrictions he may deem to be appropriate."

Basically, who comes into the country and what happens to them once they do is left to the president's judgment. With Trump as president, the implications for immigrants look dismally clear.