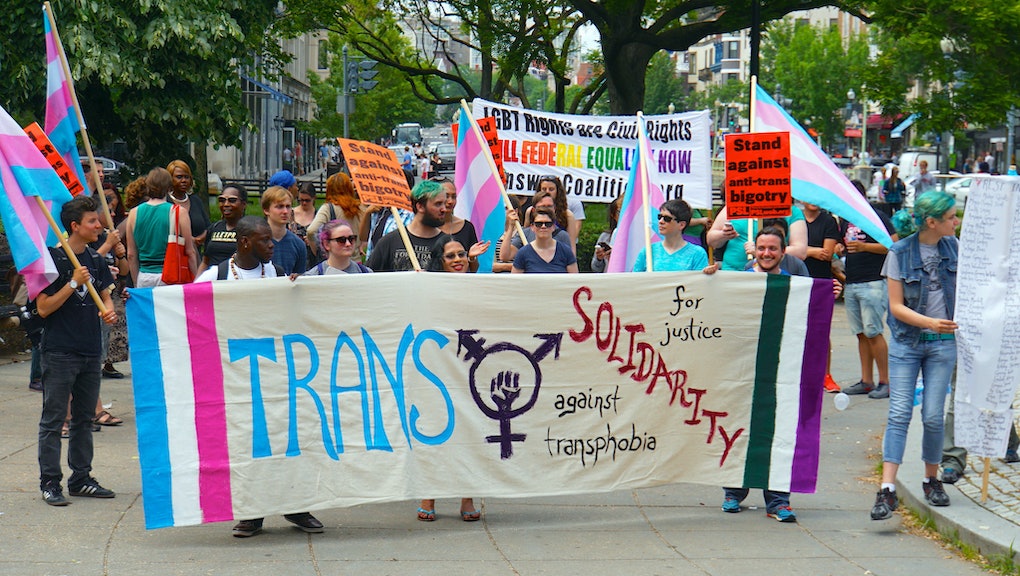 Editor's note: On Feb. 8, 2017, President Donald Trump tweeted a link to a piece in the Federalist that labels the following story as "fake news." This story is not fake news. When it was first published, the story included tweets from a journalist, not affiliated with Mic, that reported unverified claims. Mic was unable to verify those claims, and removed the tweets from the story shortly after publication, updating with interviews from verified sources to ensure the story was fair and accurate. Mic's updated story appears below.

The upcoming Donald Trump presidency is already weighing heavy on the shoulders of transgender youth.

In a statement to Mic, Debi Jackson, the owner and founder of transgender advocacy organization Gender Inc., and moderator of a private Facebook group for parents of transgender children, confirmed that there have been a "few suicides and multiple suicide attempts."

Jackson added that, given how recently the losses occurred, the families wish to maintain privacy for several reasons, including their own safety.

After such a contentious election cycle, the results of the vote on Tuesday night left many people across the LGBTQ community (as well as other marginalized communities) feeling incredibly anxious leading to acts of self-harm and desperation, including a few suicides and multiple suicide attempts. The families in question could have many reasons for wanting to maintain privacy, with the first and foremost being that their losses are only hours old. They could be very early in their journey, seeking counseling with gender therapists and having not even reached the point of a transition. They could be living in a part of the country where they did not feel safe as LGBTQ people and feel even less safe today. They could be people who experienced such harassment and discrimination that they moved to start over in "stealth mode" for their emotional well-being. No matter their reason for not being public, we cannot ask them to become public in their grief. We respect the concern that people have in wanting to report accurate information, but we are more concerned with supporting those who need personal help at this time, and we are concerned that widespread reporting could lead to suicide contagion.

According to several LGBTQ suicide hotlines, the number of calls received by volunteers working the phone lines has risen dramatically from normal call traffic. Hotline traffic has doubled at the Trevor Project, a crisis hotline dedicated to LGBTQ youth, according to deputy executive director Steve Mendelsohn.

"Young people have been reaching out more and more since the election," he said in a phone call on Wednesday afternoon. "They're very anxious and frightened. They have a fear that the gains we've made over the past few years could be undone."

Mendelsohn could not give an exact number as to how many calls the Trevor Project has fielded, but he did say they've requested more trained volunteers to work the hotline.

According to a statement on its Facebook page, crisis hotline Trans Lifeline has fielded over 300 calls in the last 24 hours, a number it described as "record-breaking."

A 2014 report from the Williams Institute showed that 41% of transgender Americans have attempted suicide, as opposed to 4.6% of the general population.

Nov. 10, 2016, 5:39 p.m.: This story has been updated to include a statement from Debi Jackson and to remove tweets from Zach Stafford.

Editor's note: For information about suicide prevention or to speak with someone confidentially, contact the National Suicide Prevention Lifeline at 1 (800) 273-8255 or the Crisis Text Line at 741-741. Both provide free, anonymous support 24 hours a day, seven days a week. Those looking for a trans-specific resource can call the Trans Lifeline at (877) 565-8860.