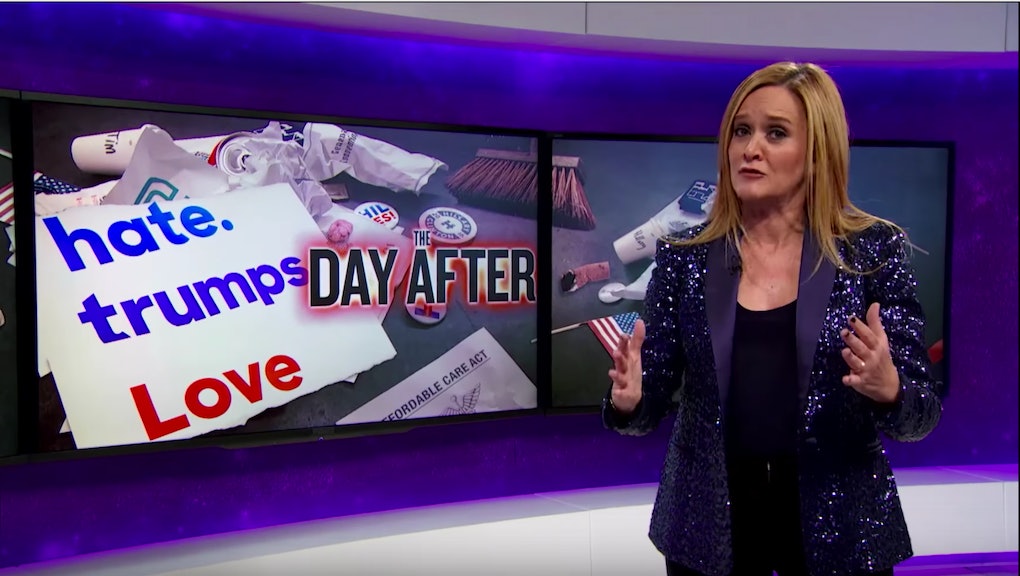 Samantha Bee planned to wear a sparkly blue blazer for her post-election episode of Full Frontal, expecting a celebratory mood with a Hillary Clinton victory that many pollsters predicted. That obviously wasn't the case — Donald Trump will be our 45th president — but Bee still wore the blazer "ironically" in the wake of Trump's win.

While Bee wondered how pundits, pollsters and the media got the end result of this election completely wrong, the host also knew where the blame should be directed: white people.

"I guess ruining Brooklyn was just a dry run," she says. "The Caucasian nation showed up in droves to vote for Trump. So I don't want to hear a goddamn word about black voter turnout — how many times do we expect black people to build our country for us?"

Bee was similarly apathetic for white people who tried to distance themselves from the droves of people who voted for Trump.

Bee then cited some of the demographic splits among voters for Clinton and Trump, and was appalled that so many white women voted for a "vial of weaponized testosterone" over Clinton. Of course, it's especially damning that this candidate has many accusations of sexual assault against him.

"Hope you got your sticker, ladies," she adds. "Way to lean out."

However, despite her disappointment at the outcome of a Trump presidency, Bee ended on a hopeful note. She pointed to Clinton's concession speech from Wednesday, in which Clinton reminded all the little girls watching that they are "valuable and powerful and deserving of every chance and opportunity in the world to pursue and achieve [their] own dreams."

"If Ms. Rodham's not in the White House, that's OK," Bee concluded. "One of those girls is going to be. We still have millions of nasty women who aren't going away. And as long as women over 25 are still allowed on television, I'll be here cheering them on."