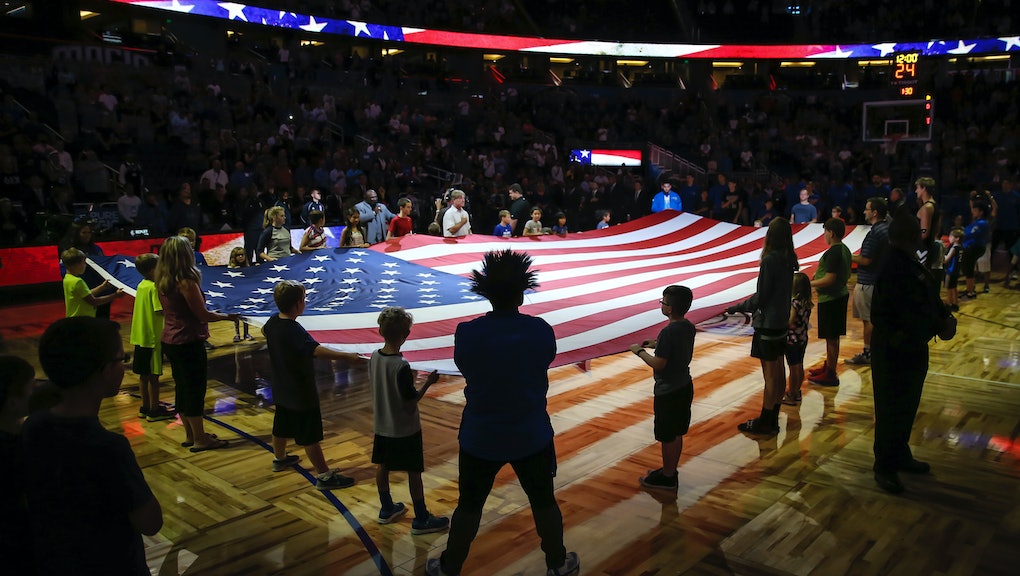 For many, waking up Wednesday and seeing that Donald Trump, reality television star, casino magnate and demagogue, had been elected president, it seemed like all color had drained from the world.

As so many writers have pointed out, this feels like a new America — an America now guided by "nativism, authoritarianism, misogyny and racism" as David Reminck of the New Yorker wrote; an America facing an "uncertain future in light of the vast chasm now revealed by this election" the Washington Post offered. Our buoyant national anthem, which describes this country as the "land of the free and the home of the brave," simply doesn't feel like it represents the nation in its present incarnation.

Enter British composer Thomas Hewitt Jones. The artist shared an updated version of the United States' "Star-Spangled Banner" on Wednesday — a more somber, wistful version of our anthem to suit the times, titled the "The Hate-Strangled Banner."

For Hewitt Jones' reimagining, he's pitched the song down, slowed it significantly and transposed it into a minor key. The melody, led by cello, creates a haunting atmosphere, and its warbling vibratos appear to mimic the ragged breathing of a sobbing human.

The new tune comes amidst a fervent debate surrounding the "Star-Spangled Banner" as being a fitting anthem for this country. San Francisco 49ers quarterback Colin Kaepernick sparked nationwide protests for sitting during the national anthem during a preseason game, saying "I am not going to stand up to show pride in a flag for a country that oppresses black people and people of color."

His protest led to reappraisals of the song's meaning and arguments about whether the ideas the song seeks to deliver truly speak to all Americans.

Hewitt Jones has built a name for himself by constructing subtle politic critiques with classical music. He made headlines in July with his "Fantasy on David Cameron," taking the four notes that former British Prime Minister David Cameron was caught cheerfully humming into a hot mic following his speech handing over the government to Teresa May after the Brexit vote.

His latest piece builds out of a very uncertain moment, this time in U.S. history. Like his "Fantasy on David Cameron," Hewitt Jones' piece was composed rapidly in a matter of hours, in attempts to soundtrack the feeling of division felt throughout the country the morning after.

"I wrote this piece overnight because I was sad and shocked at the extreme difference of opinion at the moment," Hewitt Jones told Mic of the song in an email conversation, "and how angry some people are, so full of hate, when as the Beatles so rightly put it, 'All you need is love.'"