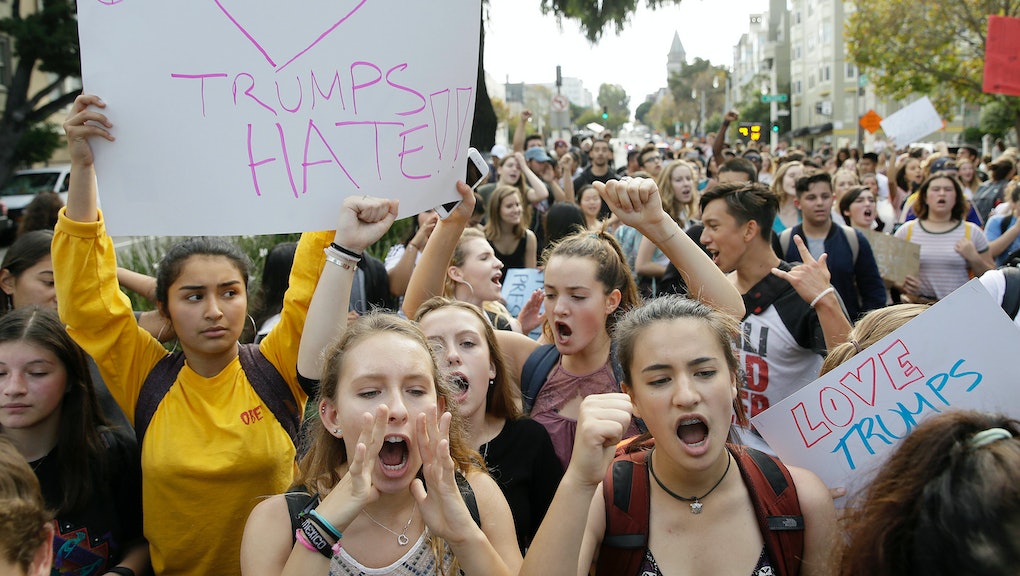 High school students from all over San Francisco staged a walkout Thursday, streaming into the streets and heading toward City Hall to rally in protest of President-elect Donald Trump.

Thousands of students participated in the march, according to a local NBC affiliate. They were looking to make known their outrage at the results of the 2016 election, in which they were largely unable to take part.

"The students — and especially the girls — were so upset yesterday that we spent hours meeting and talking about our dismay, outrage, fear, depression, confusion, plans for action," Suzanne Shimek, a teacher at participating Lick-Wilmerding High School, told SFist in an email.

At least 10 area public schools took part in the march, according to SFGate. Students shouted "Not my president" — a chant that was heard frequently during similar protests in New York City, Chicago and other cities across the country Wednesday.

High schoolers are generally too young to vote, so a walkout is one way they can add their voices to the national conversation. And according to SFist, the students who marched in San Francisco Thursday seem to appreciate that they're about to inherit some serious challenges: Shimek added that one of her students explained how "[a] lot of the responsibility to enact change has fallen on our generation, and the more we do sooner the more likely we will be to succeed."

If only people under 40 had voted in the 2016 election, Democratic nominee Hillary Clinton would have won with a landslide 357 electoral votes. The younger generation leans left, teens included — and these teens are outraged. Good thing they'll probably be able to cast a ballot at the end of the Trump administration, and some may even get to participate in the 2018 midterm elections.