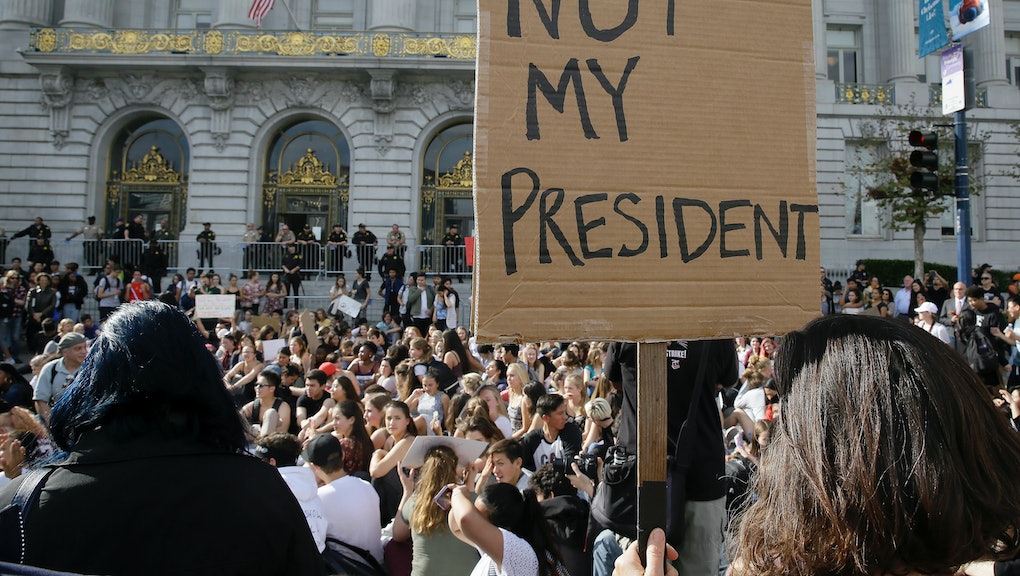 Could California actually secede? Here's the likelihood of Calexit

Like a lot of their fellow blue state-dwellers, many people in California are displeased with the outcome of election night. Faced with the prospect of living in Donald Trump's America, Californians are increasingly discussing the subject of secession.

Nodding to Brexit — a somewhat strange choice, considering that the U.K.'s decision to leave the European Union in June enjoyed backing from the far right — liberal California is exploring a Calexit referendum, up for a vote in spring 2019.

The question is: Can California leave the United States and exist as its own country? The answer is: Technically yes, but the odds of it doing so are extremely low.

The plan: As Louis J. Marinelli — leader of the group that backs Calexit, Yes California — told the Los Angeles Times in 2015, the idea isn't a South Carolina-style secession.

"We're not trying a 1860s breakaway; we're talking about California being recognized as a nation within a nation, like Scotland in the United Kingdom," Marinelli said. "We feel California is more than just a state. That's what this campaign is about."

As Yes California's website points out, the state boasts "the sixth largest economy in the world." It has a population of nearly 38 million, with a particularly large Latino community. Having voted overwhelmingly in favor of Democratic presidential nominee Hillary Clinton — who won the state with roughly 62% of the vote — California also hosts the powerful tech industry.

According to Tech Crunch, Silicon Valley is ready to "pack up its toys and leave," as the site put it in a Thursday headline. Shervin Pishevar, an investor and start-up founder, is putting his money where his mouth is and funding #Calexit. The plan he outlined in a seven-part tweet thread provides for a temporary secession, with possible re-entry once the Trump years are behind us.

Can it work? As Tech Crunch reported, Calexit draws its inspiration from Texas' 2012 push to leave the union after President Barack Obama was elected to his second term in office. More than 100,000 people — the threshold number of signatures necessary to garner the president's response — signed a petition asking permission for the Lone Star State to secede. The administration's response was a polite but hard no.

"As much as we value a healthy debate, we don't let that debate tear us apart," Jon Carson, former White House director of public engagement, replied. "Our Founding Fathers established the Constitution of the United States 'in order to form a more perfect union' through the hard and frustrating but necessary work of self-government. They enshrined in that document the right to change our national government through the power of the ballot — a right that generations of Americans have fought to secure for all. But they did not provide a right to walk away from it."

Carson cited the Supreme Court's decision in a previous Texan effort to leave the union after the Civil War. In 1869's Texas v. White, the court ruled:

When, therefore, Texas became one of the United States, she entered into an indissoluble relation. All the obligations of perpetual union, and all the guaranties of republican government in the Union, attached at once to the State. The act which consummated her admission into the Union was something more than a compact; it was the incorporation of a new member into the political body. And it was final. The union between Texas and the other States was as complete, as perpetual, and as indissoluble as the union between the original States. There was no place for reconsideration or revocation, except through revolution or through consent of the States.

Which is to say, sorry but no. Not unless Texas rebels or unless the rest of the states agree. In becoming a state, Texas agreed to help "form a more perfect union." In 2012, Carson reiterated that sentiment in his response to the secession petition.

There is a path, but it's unlikely to lead to secession. Yes, California acknowledges that ruling, noting that the Constitution didn't specifically state that "no state may be permitted to withdraw from this Union." Texas v. White and the administration's recent response effectively provides that statement, though.

What Yes California proposes is a referendum, and if the Californian majority backs a Calexit, the state would send a delegate to Washington to propose an amendment to the U.S. Constitution, to be approved by a two-thirds vote in both the House and the Senate. Should that vote swing in Yes California's favor, the matter would then go to state governments, and if 38 states agreed, they would have the requisite consent outlined in Texas v. White to leave the union.

Or, they could call a convention of the states to approve the move, and with the approval of 38 states, achieve independence. But as Tech Crunch pointed out, that plan's reliance on the rest of the country — which needs California's economy — is likely to torpedo the effort. As with every other recent state secession effort, California's will probably prove unsuccessful.

What California can do, however, is to join with others dissatisfied by a Trump presidency in pushing back.