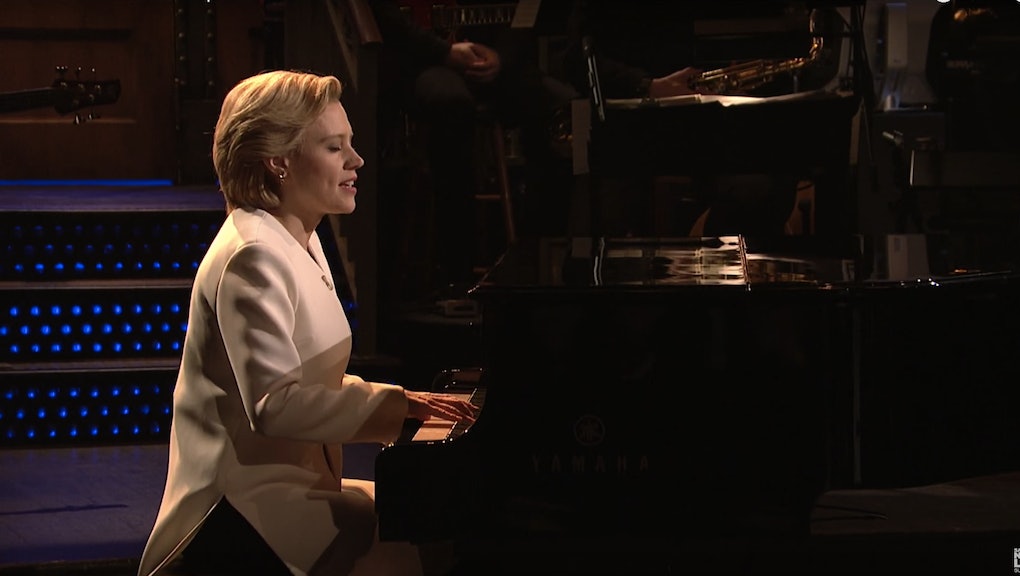 It's been a bad week.

Understanding, perhaps, that it would be too soon for an Alec-Baldwin-as-Donald-Trump cold open, Saturday Night Live opted for a more cathartic start to their post-election episode: Kate McKinnon, in Hillary Clinton costume, playing Leonard Cohen's "Hallelujah" on the piano. It was a two-pronged tribute to the singer/songwriter who passed away Thursday, and to Clinton's loss of the presidency early Wednesday morning.

"Hallelujah," of course, is Cohen's most famous song. Over 300 different versions exist. Emotional and somber, "Hallelujah" is a fitting homage both to Cohen and to the Clinton campaign. Which is probably why McKinnon, reprising her role as the Democratic nominee, choked up singing this verse:

I did my best, it wasn't much/ I couldn't feel, so I tried to touch/ I told the truth, I didn't come to fool ya/ And even though it all went wrong, I'll stand before the lord of song/ With nothing on my tongue but hallelujah.

Because, well, yeah: That's pretty fucking apt. Ditto the line, "Love is not a victory march," considering that Clinton campaigned on trumping hate with love. It's all very on the nose, and thus, a welcome opportunity for a good cry at the end of a week that's seen many, many people weeping at their desks.

Trump's win was a stunning upset, as Clinton had been declared by multiple outlets (including this one) and pretty much every poll to be the hands-down favorite to fill the Oval Office. We are now staring down the barrel of an administration that is unfriendly to people of color, Muslims, LGBTQ individuals, women — broad swathes of the country's population. The national mood is one of fear and loneliness.

But, because we all have to move forward, a teary-eyed McKinnon offered a hopeful final message:

"I'm not giving up and neither should you."

Watch the full opener below: