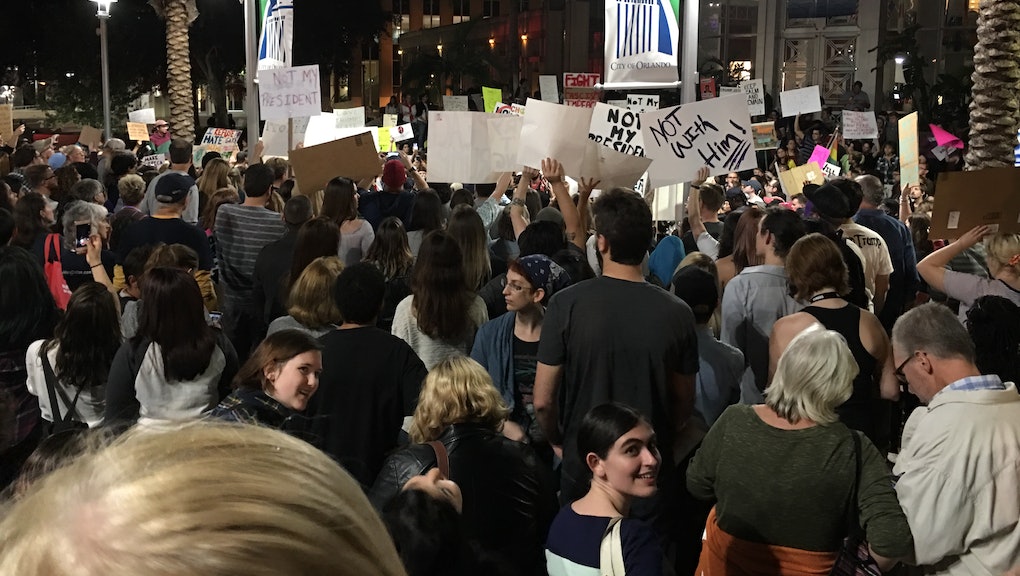 Protesters in Orlando, Florida, rallied against Donald Trump the night before LGBTQ pride

ORLANDO, Fla. — Thousands of protesters gathered on Friday night on the shores of Lake Eola in Orlando, Florida, under a bright moon to denounce President-elect Donald Trump.

Muslim women in hijabs walked alongside black women, queer youth and Latina drag queens and chanted: "We reject the president-elect!" "Trans lives matter!" and "What did we vote for? Justice! Who did we vote for? Hillary!"

The protest, which snaked through Orlando's vibrant downtown district, was noisy but remained peaceful. Bystanders and police officers alike lined the streets and took video of the ongoing march.

The protest started less than two miles from Pulse nightclub, the site of the deadliest mass shooting in modern U.S. history. At least 50 people were killed and 53 were wounded at the gay nightclub. The shooting weighed heavy on the minds of people at Friday's rally, several of whom spoke to Mic about their anger with Trump and Vice President-elect Mike Pence's looming LGBTQ agenda.

"I was horrified by what happened," Katrina Constantine, 29, said of the election results. Constantine said she attended the rally "in honor of the Pulse victims" and added that she was also queer and her girlfriend was Latina.

Constantine held a Mean Girls-inspired sign that depicted Trump's signature hairstyle and read, "That's why his hair is so big, it's full of secrets." According to her sign, the secrets were misogyny, racism and tax fraud.

Bobby, who is gay, wore a pro-Hillary/anti-Trump T-shirt and sported a "Pulse" wristband. He said he attended the rally because he was disowned by his family and didn't want that to happen to another LGBTQ child in Trump's America.

"I can't let this happen to another Bobby," he said. "I can't let my story happen to someone else when there's so much to be done. To think that Bobbys have to go back into hiding isn't fair to anybody."

Hannah Powell, 20, held a sign decorated with fists that said "Queer women fight back." Powell said she "really cares about LGBT rights and protections for minorities."

But protesters were thinking about much more than LGBTQ rights. Many were there because they were incensed by Trump's racially charged rhetoric.

Yulissa Santana, 19, help up a sign that read "Dump Trump" with a poop emoji dressed up as the president-elect. She said Trump's immigration plans worry her, as they might affect her own family.

"It's sad for me to think that my nieces and nephews might grow up without their father in their lives," Santana said. "Because I grew up without my father in my life and it sucks, man."

Despite their fear and anger, some protesters said they hoped to spread love.

Mic's Mathew Rodriguez and Gabe Gonzales attended the rallies in Orlando. You can watch their coverage below.