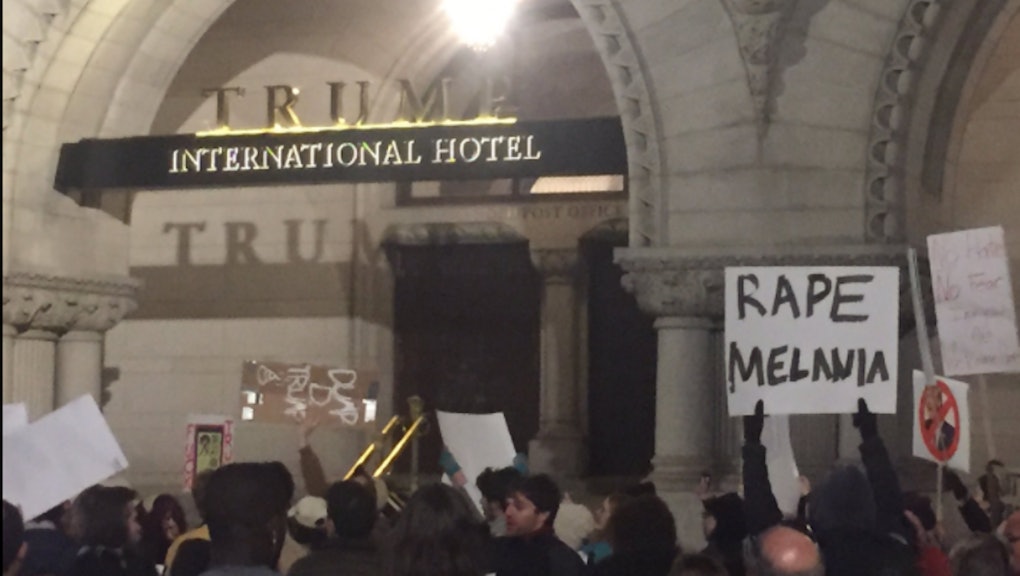 Remember that time Michelle Obama made "When they go low, we go high" the motto of the Democratic party?

That's an important slogan to keep in mind right now. Emotions, fears, frustrations and anxieties are running high following Donald Trump's upset victory in the 2016 presidential election. Many groups are deeply worried about their futures, and with good reason: Trump's campaign was defined by hate-mongering rhetoric that appalled his opponents.

Which is why it's so disappointing to see "Rape Melania" trending on Twitter. The call to attack Trump's wife allegedly appeared on a protester's sign at a Washington, D.C. demonstration on Saturday, one of many anti-Trump marches held across the nation in the days since the election.

It's difficult to tell if images of the "Rape Melania" sign are real, but altered or not, the sentiment is not okay.

In early October, the Washington Post leaked audio of a 2005 hot mic conversation in which the president-elect boasted about grabbing women by their genitals at will, forcing himself upon them without their consent and being able to do whatever he wanted to do with women simply because he was famous.

Days later, CNN released a recording of Trump talking to shock jock Howard Stern. When Stern asked if he could call Trump's eldest daughter, Ivanka, "a piece of ass," our president-to-be gave the green light. He also recalled barging in on naked Miss Universe contestants in their changing rooms, explaining that he got away with it because he was "owner of the pageant."

Trump is a man who has been repeatedly accused of sexual assault and rape. His deplorable treatment of women earned him rebuke from the highest office in this nation, and indeed, it was Trump's misogyny — not his racism or his Islamophobia or his xenophobia or selection of a running mate hostile to LGBTQ individuals — that looked like it might be the final straw for voters.

It wasn't, of course, and now right-wing Twitter is calling hypocrisy on Democrats, accusing them en masse of advocating a woman's rape.

But for precisely the same reason it's indefensible to advocate for grabbing women's vaginas, as Trump did, it's indefensible to advocate for the rape of his wife or of any woman. Leveraging sexual violence as retribution only serves to reinforce rape culture, and as Gloria Steinem put it, the normalizing of violence against women "endangers us all." It would also destroy the credibility of protesters voicing their extreme (and legitimate) displeasure with the president-elect's track on women's rights.

Threatening rape was, throughout the election, a preferred tactic of alt-right trolls looking to silence those who spoke out against Trump. As some on Twitter have pointed out, the sign looks a lot more like an alt-right strategy to heighten antipathy toward protesters than it does a legitimate call from the left.

Truly, "Rape Melania" contradicts the spirit of the protests taking place across the country. Whether the sign is real, fake or alt-right propaganda, its message is, as one Twitter user put it, "disgusting" and intolerable.

We can only hope it's not representative of the next four years.