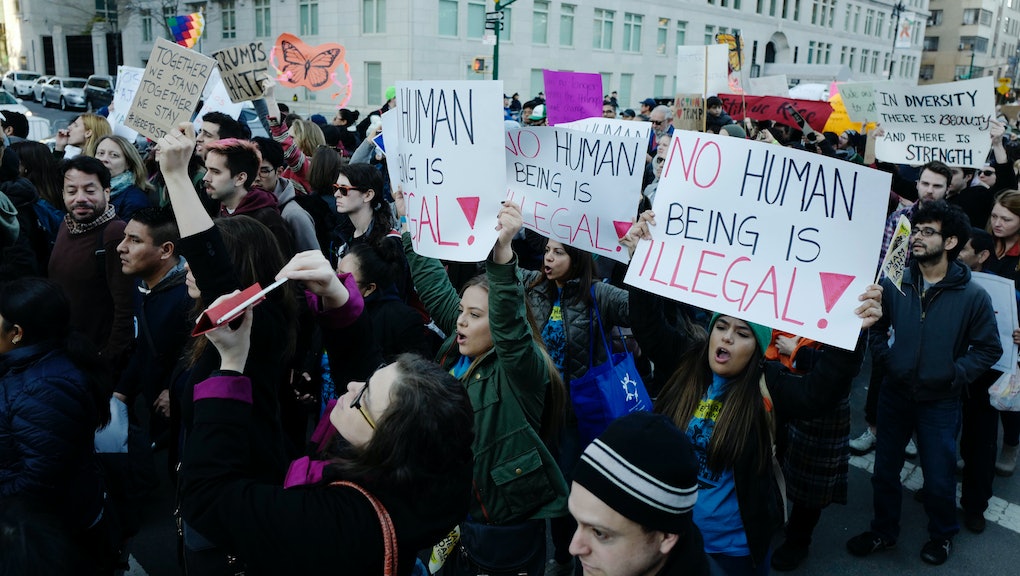 Protests against Donald Trump carry into their fifth day nationwide

Protests against the election of Donald Trump to the presidency continue into their fifth day. On Sunday, demonstrators returned to the streets of major cities and small towns across the country, voicing their discontent with the president-elect and rejecting him as their leader.

Trump has not looked kindly on the protests, tweeting Thursday that "professional protesters" were being "very unfair" in pushing back against his election. On Sunday, former Trump campaign manager Kellyanne Conway called on President Barack Obama and Democratic nominee Hillary Clinton to "say to these protesters, 'This man is our president.'"

But both already have, and in any case, the constitution protects the protesters' right to free speech. Protesters nationwide have been exercising that right and will likely continue to do so.

Once again, protesters in New York City — which mayor Bill DeBlasio declared a safe haven for those threatened by the Trump administration on Thursday — gathered in Columbus Circle and headed for Trump Tower in Midtown, Manhattan. On Sunday, the emphasis lay on Trump's xenophobic immigration policies.

Saturday's protests saw thousands gathering in Union Square and flooding Fifth Avenue, streaming toward the president-elect's home. Protesters included Michael Moore, who allegedly made it into Trump Tower, but was escorted out.

Thousands of protesters in Hollywood, California, gathered outside the CNN Building Sunday afternoon. According to the Los Angeles Times, tensions between police and demonstrators are mounting, with arrests already made. On Saturday, five people were arrested during demonstrations in downtown L.A.

On Sunday, hundreds of protesters marched in downtown St. Louis to show that they would be "firm and resilient against hatred, while remaining peaceful," according to the Facebook page for St. Louis March on Downtown.

Protests in Portland turned violent Saturday, with one demonstrator shot early in the morning and the day ending in 71 arrests. As such, residents planned peaceful events for Sunday.

According to the Oregonian, "a silent candlelit vigil" is scheduled at the Salmon Street Springs, while a family-oriented event began earlier in another part of the city.