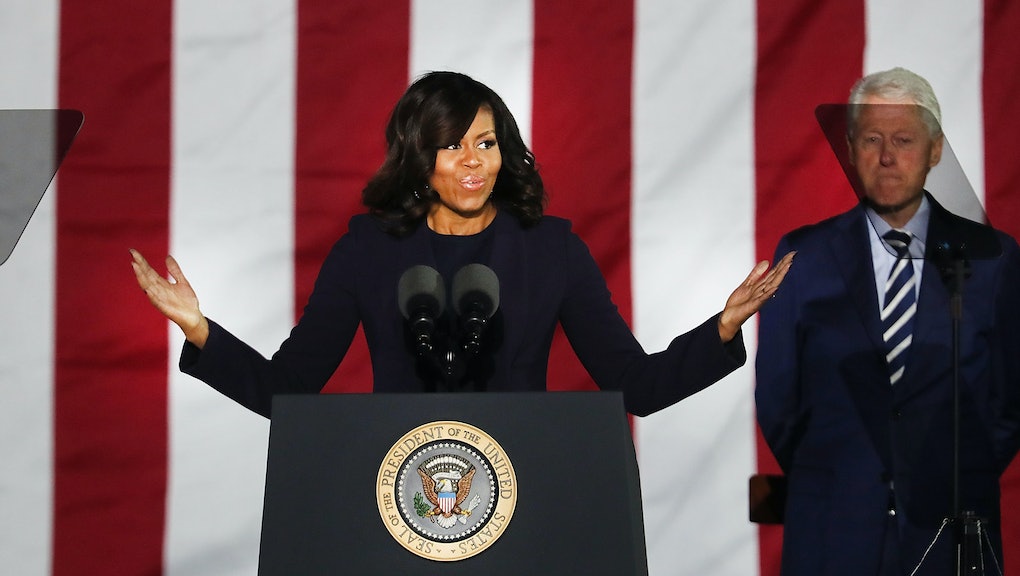 At this point, it's safe to say that we, as a country, barely deserve Michelle Obama. Over the past eight years as first lady of the United States, she has personified grace and humility, stressed the importance of self-love, ensured black women that they matter and even found time to gift the world this Vine.

Now, less than three months before she's expected to leave the White House with her husband, she has gifted the world yet another necessary thing: A new cover of Vogue, her last as first lady.

And we're not crying, you're crying.

On the December Vogue issue, which will mark the third time the first lady has appeared on the glossy's cover, Obama is seen wearing a flowy, sleeveless white dress by Carolina Herrera while laying in the grass at (we're guessing) the White House.

In various other shots, Obama poses along the White House's exterior in red carpet-ready gowns from Versace and Herrera.

As noted by the Washington Post's Robin Givhan, the spread looks far more influenced by Obama's celebrity than politics.

"If there is any takeaway from the images by photographer Annie Leibovitz, it is that Obama is offering up a version of herself to the public that is separate and distinct from the role she has filled for nearly eight years," Givhan wrote. "The message is not brusque or without nostalgia and gratitude. But she is done. Finished. Free."

Indeed, compared to her two previous covers in March 2009 and April 2013, she looks more like a movie star than a first lady. And that's pretty fitting, given that in just a few months (*grabs a tissue*), Obama will be done with being our first lady (*grabs another tissue*) and will enter the celebrity sphere.

Of course, when the images were first revealed on Friday, Twitter was equal parts thrilled and emotional.

Although this is her last cover as first lady, we're hopeful that Obama has more covers in her future, as she continues to change the world for the better.

"I will take the same approach leaving as I did coming in," Obama told Vogue. "I won't know until I'm there. I've never been the former first lady of the United States of America before. But I will always be engaged in some way in public service and public life."

In a week filled with uncertainty, that's a nice thing to hear.