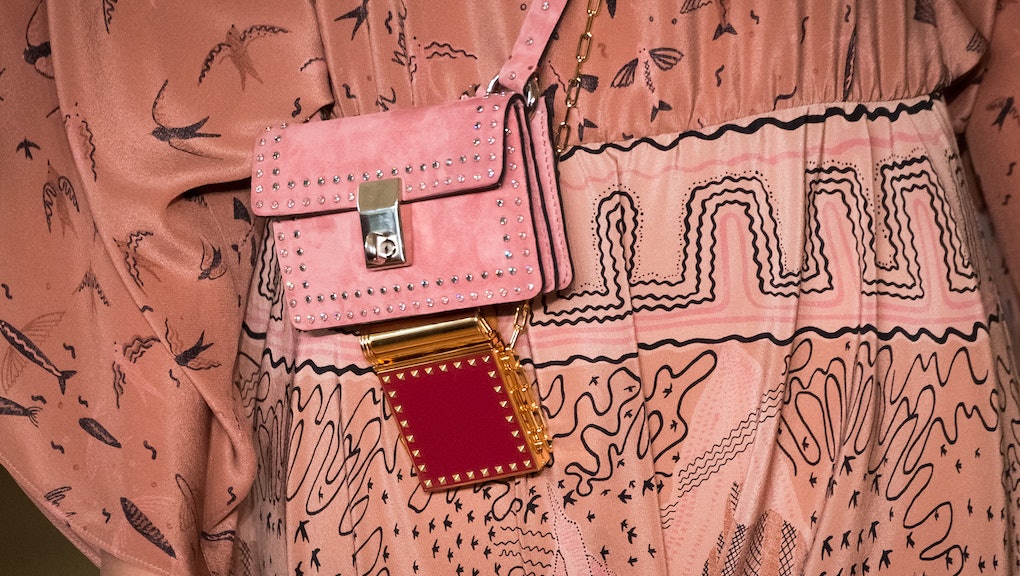 At the Valentino show at Paris Fashion Week in October, models walked down the runway with bags the size of matchboxes.

At the Dior show, there were uber-thin purses that could fit a phone and not much else.

At the Givenchy show, models wore purses so small that they hung around their necks like statement jewelry.

At the Louis Vuitton show, your purse was effectively your phone case.

At the Chloe show, the purses were small enough to fit in the palm of your hand.

Though fashion has become increasingly bolder over the past year, favoring larger silhouettes, platform shoes and maxi dresses, the purse has ever so mysteriously started to shrink.

Now, the micro bag or mini bag, both terms that have been used to describe these itty-bitty purses, is all the rage — and for good reason too. Of course, they're cute and lightweight and, in theory, would cost less than, say, a suitcase-like Birkin bag. And of course, fashion has no obligation to be practical to the everyday working person.

However, for people who strive to carry all the necessities with them wherever they go — whether it be their phone, wallet, keys, lipstick and what have you — that's a problem.

So, we're begging the fashion industry to hear our call: Please stop making micro bags. Or, at the very least, refuse to let this extreme trend trickle down. Already on sites like ASOS, which are often directly influenced by runway trends, there are micro bags, like this tiny egg purse and this fringe bag that is 4 inches wide.

And we need to put a stop to it.

There are several reasons for this plea, with the obvious one being that they do not serve the purpose that purses were originally created to fulfill. They can't hold shit. Like, the only thing that can fit in those Valentino bags is what? A condom?

A more unexpected problem with these bags, though, is that they are rooted in classist history, to a time when large purses were out of fashion and linked to the lower classes. In the 19th century, there were things called reticules, which were very small fabric purses that sometimes had ornate embroidery. They were also alternatives to pockets, which has an entire sexist history of their own.

As Mic has reported before: "[Reticules] also became a status symbol, since the bags weren't nearly large enough to carry any money, and well-to-do women tended to leave all the money-handling to men. Large reticules were looked down on because they symbolized that a woman worked and couldn't just stay home, like, sewing handkerchiefs and sipping tea or something."

So now, it seems, history is repeating itself. Designers are creating minuscule bags and asking thousands of dollars for them, making them a status symbol. Carry one of these micro bags and people could think, "Wow, they're so rich, they can pay someone to carry all their shit." Or, "Wow, they're so rich they can afford to drop $1,250 on a bag that holds little else but maybe a feather."

"The smaller the bag, the greater the impact," the New York Times wrote back in June. "In fact, these tiny satchels seem to function as unexpected power statements, suggesting that the wearer is too proud, too rich or far too influential to carry anything larger than a cigarette pack."

Micro bags are not our future, nor do they deserve to be. People deserve the right to carry massive bags everywhere and have fashion designers think that's way cool too. Though there are a number of designers — like Gucci — that have consistently embraced the decently-sized bag, the idea that micro bags are the latest trend we have to care about is, well, super upsetting.

Because when will it end? Will we eventually have to carry five mini bags at once in order to store all of our daily needs? One for snacks? One for birth control? One for your makeup? This worries us.

We don't want to buy a bag that can only fit a condom or a few bunched up dollar bills. That's what pockets (which should be mandatory in every clothing item for people) are for. Especially because well-endowed pocket space is so hard to come by in clothing advertised for women, what's a person to do?