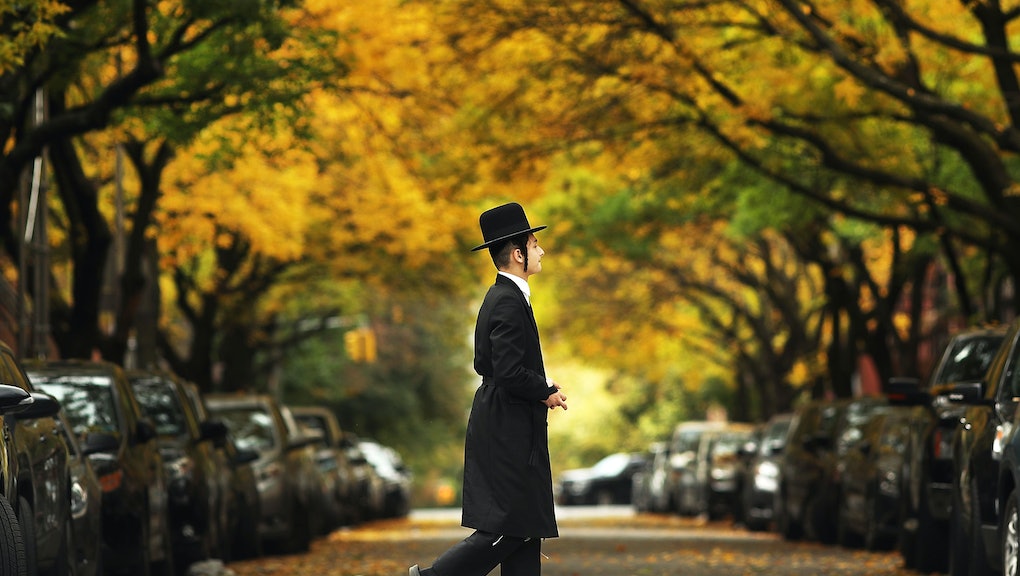 Trump courted white nationalists, but Hasidic Jews voted for him in droves

In a sea of blue on New York City's electoral map, Borough Park stands out in blood red.

The neighborhood is home to one of the largest communities of Hasidic Jews outside of Israel. Although most Jewish Americans cast ballots for Hillary Clinton, 69% of Borough Park residents voted for Donald Trump.

Members of the conservative sect of Judaism known as "Hasidic" or "ultra-Orthodox" have long voted Republican, but their vote this year is curious given Trump's anti-Semitic rhetoric and political alliances. During his campaign, the president-elect retweeted white supremacist Twitter accounts and academics favored by neo-Nazis, riding a tide of white nationalism to victory on Election Day. On Sunday, any hope the candidate would govern more magnanimously than he campaigned was dashed when Trump appointed white nationalist and former Breitbart CEO Steve Bannon as chief strategist.

"The rest of the Jewish community has moved more democratic since the Christian conservatives became the base of the Right," said Ken Wald, a political scientist at the University of Florida who has studied Jewish political interests. "But the ultra-Orthodox feel they have more in common with religiously observant Christians than secular Jews."

Hasidic Jews are more theologically conservative than non-Orthodox Jews, living in isolated communities even in the midst of sprawling cities, with strict religious observances, rules against marrying outside of the faith and prescribed dress codes. Hasidic Jews are usually forbidden to touch the skin of member of the opposite sex outside of marriage.

The most obvious reason Hasidic Jews broke for Trump is Israel. According to a 2013 survey by non-partisan research group Pew Research Center, 61% of Orthodox Jews report they are "very emotionally attached" to the country. On the campaign trail, Trump made overtures to the pro-Israel crowd, denouncing President Barack Obama's deal with Iran on nuclear weapons, and saying that Palestinians have been "trained from the time they're children to hate Jewish people." Hillary Clinton's has been more moderate on the issue.

Dov Hikind, the Jewish assemblyman who represents Borough Park, said voters in his district were turned off by the Democratic Party's opposition to Israel. He pointed to Bernie Sanders' endorsement of Keith Ellison, a Muslim congressman from Minnesota and a fierce critic of Israel, as chair of the Democratic National Committee.

Some of Brooklyn's Hasidic Jews take the same tack as other Trump supporters across the country who have dismissed Trump's remarks about minorities as mere rhetoric. Trump has referred to Mexican immigrants as "rapists" and "criminals,," and maintains that Muslims should be placed on a national registry.

"None of the Jews thought he's going to do anything wrong to the Mexicans or anything like that," said one Hasidic man in Williamsburg.

But Suzanne Bernstein, a cantor at Progressive Temple Beth Ahavath Sholom in Borough Park, has another theory: the alt-right is subtly making overtures to include Jews in its vision of a white society. She said that, contrary to anti-Semitic movements of the past, Trump's alt-right supporters aren't as concerned with narrowing the definition of white identity to exclude Jews.

"The whole notion that people would want to identify a group as white is odd to me," Bernstein said. "Because Jews come in all colors. We're a diverse people."

Bernstein also pointed to recent studies about the role of authoritarianism as a factor in Trump's success, pointing to a study at the University of Massachusetts that identified authoritarianism as one of the most reliable predictors of Trump support.

"The the folks who are seriously into following the law to the letter are going to prefer their kids to be obedient rather than self-reliant," Bernstein said. "And a sense of a firm hand may be appealing to some folks."

But the Orthodox vote can't be reduced simply to a Republican vote on every issue and on every ticket. Hikind says that the Hasidic community's support for Democrat Andrew Cuomo for governor means the group "look[s] at individual races and decide who they think would be the best." Then again, Cuomo is also one of the most pro-Israel governors in the country, going as far as to sign an executive order preventing the state from supporting businesses that divest from Israel.

This picking and choosing of politicians based on Orthodox interests is what Wald calls an old style of "patron-client politics."

"They tend to not care about the broader issues in the election, but about the needs of their specific community," Wald said. "This is a community that doesn't want to integrate and wants to be left alone."

Wald also admits the ultra-Orthodox might not only be indifferent to the racist undertones of Trump's campaign, but sympathetic to them.

"There's a lot of ethnocentrism within that world, and they may share some of those views with Trump," he said.

But while experts thought the racist rhetoric was instrumental, they said Clinton's gender wasn't as likely to have affected the Hasidic vote. Yes, Orthodox communities have conservative views on women's roles in society, but Wald said the community was unlikely to hold a gentile woman to the same standard.

"Maybe if she'd been Jewish, it would have been different," he said.