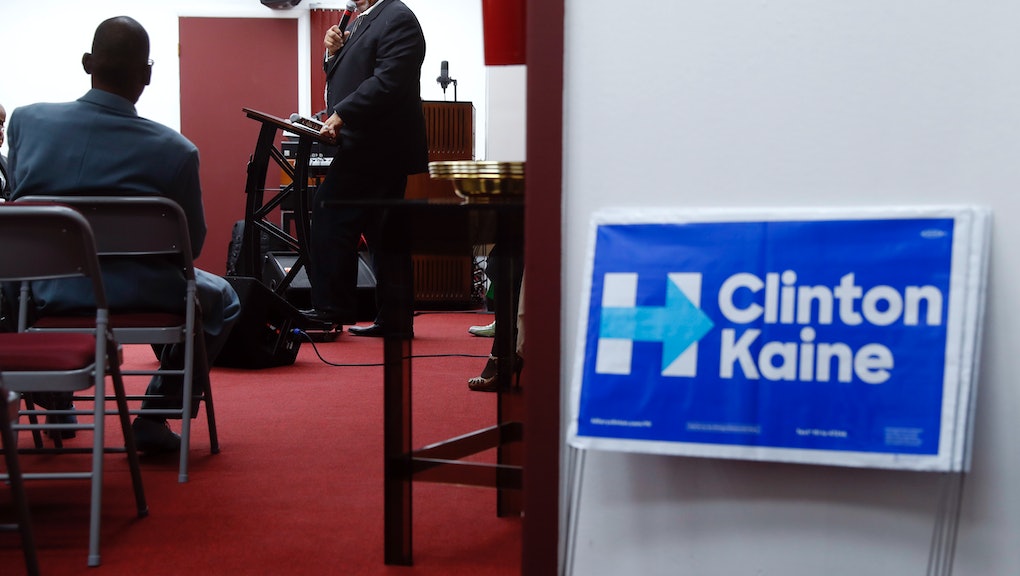 Donald Trump was elected president, despite almost every poll predicting a slamdunk win for his Democratic competitor Hillary Clinton. While there are many reasons behind Trump's sudden upswell of support, many have pointed to Hillary's failure to draw in as many African-American and non-white voters as President Obama did in 2008 and 2012.

So how did African-Americans vote in the 2016 election? Despite President Obama telling black voters that he would take it as a "personal insult" if they didn't cast their ballot for Hillary Clinton, 2016 black voters didn't coalesce behind Clinton the same way they did Obama, with Clinton earning 88% of their vote (to Trump's 8%) as compared to Obama's 93% in 2012. That being said, the overwhelming majority of African-Americans did show their support by voting for Clinton, particularly as compared to white Americans, who ultimately won Trump the election by giving him 58% of the white vote.

Here's the complete breakdown of how African-Americans voted in the 2016 Presidential Election, based on exit polls:

Unsurprisingly, turnout for Clinton was higher among black women than black men, with Hillary earning 94% of the female black vote (4% for Trump) and just 80% of men (13% for Trump). This reflects larger trends nationally, with Clinton earning 54% of women's votes and just 41% of men, and is also significantly higher than the Hispanic turnout, in which Clinton won 62% of Latino men and 68% of Latina women. There was a drop in votes as compared to 2012, however, in which Obama captured 87% of votes by black men and 96% of votes cast by black women.

Traditional thinking going into the election seemed to be that voters who had reached higher levels in their education were more likely to vote for Clinton, with Trump likely to draw in votes from those without a college degree. And nationally, the exit polls reflect that: 52% of college graduates cast their ballot for Hillary, and she earned 58% of votes cast by those with a postgraduate education.

Age is another area where African-American voting patterns seem to buck the national trend: though younger voters were seen to be statistically more likely to vote for Clinton (she captured 56% of voters 18-24 nationwide), her black voting shares were highest amongst those ages 45 and up. Just 83% of black voters ages 18-29 voted for Clinton, as compared to 87% ages 30-44 and 90% of those aged 45+.

Not all states participate in the national exit polls, but those conducted in swing states and states that ultimately had the closest votes seem to reflect the larger national trends among African-American voters. Though it often wasn't enough to combat states' pro-Trump white populations, Clinton was able to exceed her national rate of 88% of African-American votes in states like Michigan, North Carolina, Pennsylvania, and Wisconsin, earning 90% or more of the black vote in each state. But it often was still just under Obama's 2012 turnout, when he earned 95% of the black vote in Michigan, 96% in North Carolina and 93% in Pennsylvania.

As a reminder, all exit polls are based on a random selection of voters, and may be subject to sampling errors. You can find complete exit poll results from the 2016 election here.