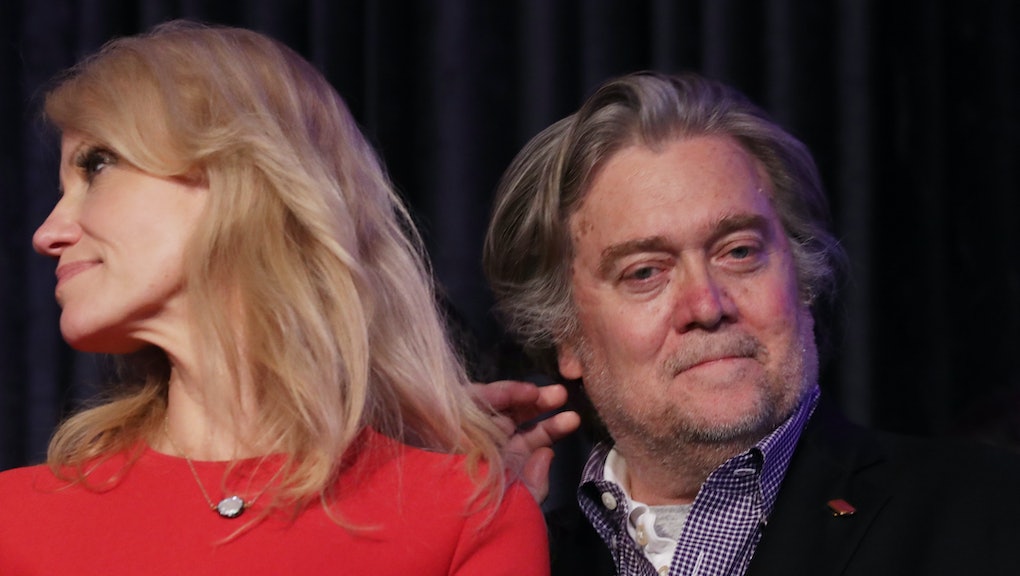 Donald Trump became the darling of the hard right and paved his path to the presidency with big promises: A wall on the U.S.-Mexico border. An immigration clampdown. Prosecuting Hillary Clinton.

In his first primetime sit-down since his upset victory, Trump toned it down. Way down. The great wall might in places be more of a fence, he said Sunday on 60 Minutes. He wasn't sure he wanted to "hurt" the Clintons. Elements of Obamacare might survive.

It was a departure from the relentless jingoism of the campaign, especially on immigration, but the alt-right wasn't ready to dump Trump over it — not yet, at least. They still had hope. Earlier, the president-elect had chosen one of their own, Steve Bannon, as his chief strategist.

Bannon got first billing in a statement from Team Trump that also announced Republican National Committee Chairman Reince Priebus as chief of staff.

Naming Priebus seemed to soothe Democrats and moderate GOP types who worried a President Donald Trump would effectively lay waste to the republic.

Bannon's appointment did the opposite, enthralling or placating the alt-right types who read Breitbart News, listen to Alex Jones on the radio or post on white nationalist sites like the Daily Stormer.

"I hope that Stephen Bannon will help encourage President Trump to keep the promises that Candidate Trump made," Jared Taylor, editor of American Renaissance, said in an interview with Mic. American Renaissance argues, among other things, that "the single greatest threat facing whites is mass immigration of non-whites into white homelands."

Taylor said in an interview that ideally, the nucleus of the Trump administration "will be a very fruitful partnership in which Steve Bannon helps set the agenda and Reince Priebus helps carry it out." That agenda, Taylor specified, would involve not only deporting undocumented people en masse, but ending birthright citizenship and cutting even legal immigration "way back."

Bannon stepped down as head of Breitbart to join Team Trump in August, with a promise to return post-election. As to whether Bannon is a purveyor of hate, Taylor said that things like a Breitbart column denigrating Weekly Standard editor Bill Kristol by calling him a "renegade jew" or saying birth control makes women ugly doesn't make Bannon a "white supremacist."

To me, and to in general 'racial dissidents' such as myself, it's his positions on immigration and naturalization and citizenship and taking a very hard look at who's coming into the country, those are the positions of his that are of interest to me, and it's my hope that Stephen Bannon will make sure that he keeps his promises in that respect.

On the Daily Stormer, under the heading "Faggots and Jews whining about Bannon appointment," Trump's new chief counselor got plenty of praise, including for allegedly having said, per divorce papers, that he didn't want his kids going to school with Jews.

Shit man. Say what you want about Breitbart but its really surprising that Trump would appoint this guy to this position. Of course he's not a white nationalist but Trump literally appointed the most far right "kosher" motherfucker you could have asked for to a White House position. A year ago I would told you adamantly that this is impossible. What a time to be alive.

Priebus and his fellow Wisconsinite, House Speaker Paul Ryan, meanwhile, got panned as "cucks" and worse.

As to Trump's remark on 60 Minutes that he was fine with same-sex marriage, commenters on the conservative Free Republic site largely said either they also didn't care, that it was a state-level issue or even that Trump was shrewdly downplaying the subject: Said one commenter, "Look at the people he is surrounding himself with, from [Vice President-elect Mike] Pence and Bannon on down. Let's step back and give him some time."

A Trump spokeswoman didn't respond to a request for comment on Bannon, whose appointment has been publicly hailed by the American Nazi Party and the KKK.

Priebus himself stuck up for Bannon during a Monday appearance on Fox News.

Bannon "was a force for good on the campaign. He's very wise and smart," Priebus said. "He's a London School of Economics, Harvard Business School, people don't know that he was a tenured Naval officer at very high levels... I haven't seen any of these things that people are crying out about."

Priebus may be able to help Trump navigate the halls of Congress and build bridges with wary GOP leaders, but "Breitbart has also viciously attacked Republicans who were not sufficiently worshipful of Donald Trump," Peter Montgomery, a senior fellow with the group People for the American Way, which has called on Republicans to denounce Bannon, told Mic.

"I think bringing Bannon [in] is a shot across across the bow to congressional Republicans," Mongomery said. He continued:

Trump is trying to consolidate his power [by] pulling into his upper echelons people who represent the [various] wings of the party and the conservative movement. So he's got Priebus there to say to the Republicans, 'I want to work with you,' and he's got Bannon there to say, 'You damn well better work with me.'

At a Monday news conference, President Barack Obama's first since Trump won and the two subsequently met at the White House, Obama faced a specific question about Trump's appointment of "a proponent of the so-called alt-right movement, what many call the white nationalist movement."

But Obama took a pass on directly attacking Bannon: "Without copping out, I think it's fair to say that it would not be appropriate for me to comment on every appointment that the president-elect starts making if I want to be consistent with the notion that we are going to try to facilitate a smooth transition."

A #StopBannon hashtag trended on Twitter as outrage grew over the appointment — but it attracted both detractors and fans.

A Republican insider who requested anonymity to speak about the incoming administration scoffed, "Trump is not a racist or a homophobe, and neither is Bannon. It's a narrative that Clinton started and the press bought into. It's not remotely true."

The operative questioned how long Bannon would have been able to hold down previous roles at Goldman Sachs and in Hollywood if he'd been a rabid anti-Semite: "It's an offensive and outrageous whispering campaign being stoked by a bunch of malcontents who don't have our country's best interest at heart."

Breitbart's landing page on Monday was stacked with Bannon defenses and eye-rolling about the "hysteria" of the mainstream media and the left.

As with many things about Trump, the only sure bet is that when it comes to figuring out what he might say or do next, all bets are off. That includes how he balances the influences of Priebus and Bannon.

"This is such uncharted territory. Nobody knows how any of these people are going to behave in public office," Jane Eisner, editor in chief of the Forward, said in an interview with Mic. The Forward covers "the issues, ideas and institutions that matter to American Jews." Its staffers have been bombarded with anti-Semitic slurs and threats, some from people claiming to be Trump supporters.

Eisner said when she heard of the Priebus appointment, "I thought, 'Okay, this is a guy who understands the way government works and seems reasonable...' and then within minutes or hours, we heard about Bannon... it's the unpredictability of it that is so terrifying."

If Trump's trying to play both sides by elevating Priebus and Bannon, maybe that's a smart political tactic, she said.

"It's also a really risky one. It doesn't make me feel more comfortable."