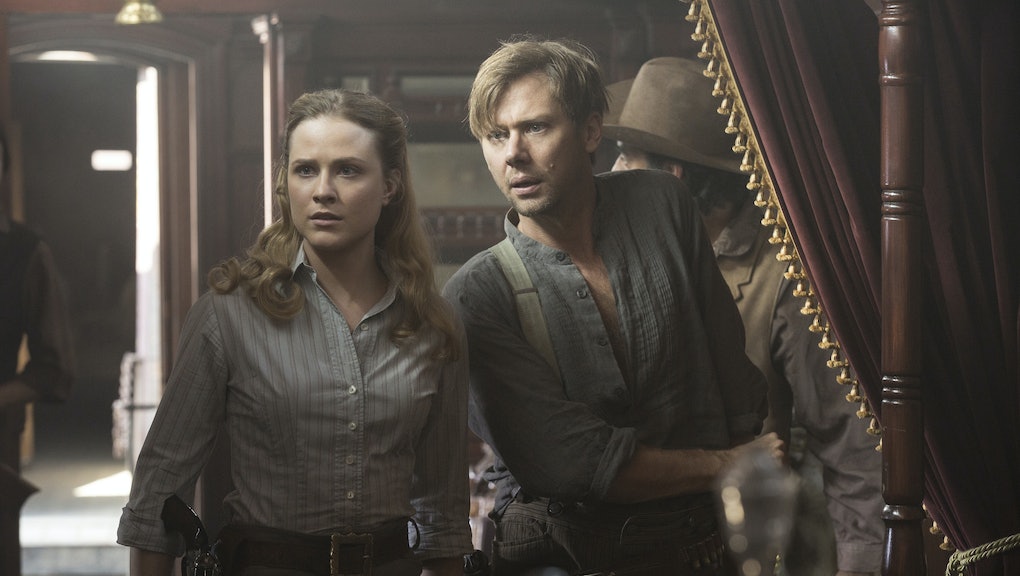 The biggest takeaway from Westworld's seventh episode is, undoubtedly, the true identity of Bernard. He's a host — one capable of murder at the behest of Ford — which turns a lot of the HBO series on its head. Bernard is, after all, the character that viewers most closely follow outside of the park. That entire point-of-view is now under scrutiny, given that Hosts don't see everything, per their programming.

But there was another subtle moment in the final scenes of "Trompe L'Oeil" that was easy to overlook: As Theresa looks through the hidden laboratory's blueprints of Hosts alongside Bernard, she stumbles upon the designs for the Host versions of Ford as a child, as well as Dolores and Bernard.

We see Dolores labeled as "Dolores Prototype" — a curious mark for the park's first Host. It's also interesting to see her design at an otherwise secret lab, whereas the other Hosts that were built there (Ford's robot family, and we assume Bernard) are unregistered Hosts. But Dolores, clearly, is a registered Host. So what's going on here?

This could be an extension of one of Westworld's more popular fan theories: There's more than one Dolores on the show. The theory initially arose through Dolores' conversations with Bernard, which seemingly occur while her character is roaming the park. The assumption here is that Dolores' consciousness could occupy two bodies, allowing her to have talks with Bernard while simultaneously following her narrative loop.

Granted, this theory has lost some steam thanks to the Bernard-Host reveal. It supports the idea that Bernard could actually be a Host version of Arnold, meaning those secret conversations with Dolores could've been with the real Arnold (who looks like Bernard!) when he was still alive decades back. This would also mean that Westworld may take place in as many as three separate timelines — because, you know, the show wasn't confusing enough without all that.

But it does open some potential avenues for Dolores' story, be it in the present day or in her journey with William. Ford has explained that there are different types of Hosts: The earlier models had more robotic parts, while the newer ones are 3-D printer Hosts. To that end, the Man in Black explains that he opened a Host up before and found robotic parts, which suggests that it was an earlier model.

If there are two versions of Dolores running around Westworld, there could also be a mechanical model, as well as more-modernized Host. Whether or not the Dolores theory pans out remains to be seen, but we're not leaving anything off the table after seven mind-bending episodes.