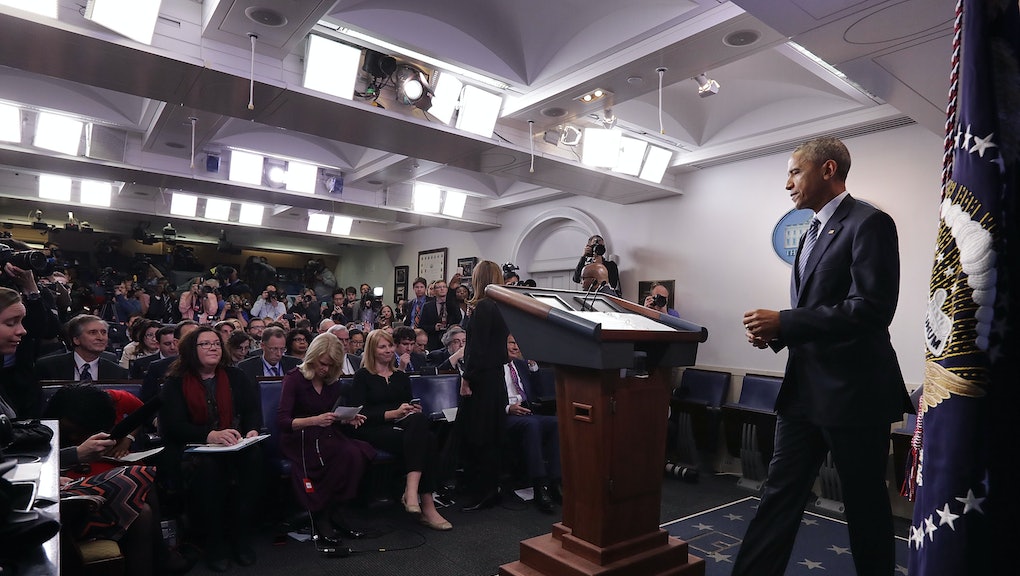 President Barack Obama declined to criticize President-elect Donald Trump's selection of a controversial aide for a top White House role, while acknowledging he "absolutely" has concerns about Trump as commander in chief.

Asked at his first post-election press conference on Monday to comment on Trump's selection of Steve Bannon as chief strategist and senior counsel, Obama didn't comment on the selection, which has come under fire from Democrats and anti-discrimination groups since Trump announced the hire on Sunday.

"Without copping out, I think it's fair to say that it would not be appropriate for me to comment on every appointment that the president-elect starts making if I want to be consistent with the notion that we are going to try to facilitate a smooth transition," Obama said.

Bannon is the former head of Breitbart and one of the chief figures in the alt-right movement, which is defined by nationalism and white supremacy. He joined the Trump campaign in August as CEO and was the driving force behind Trump's anti-immigrant populist message during the final stretch of the campaign. His selection as one of the top officials in the incoming Trump administration was hailed by prominent white supremacists on Monday.

In a response to an earlier question, Obama said he had stressed the importance of selecting qualified officials to serve as White House staff during his post-election meeting with Trump.

"Probably the most important point that I made was that how you staff — particularly the chief of staff, the national security adviser, your White House counsel, how you set up a process in the system to surface information and generate options for a president, understanding that ultimately the president is going to be the final decision-maker — that that's something that has to be attended to right away," he said, in a thinly veiled reference to Trump's hiring of Bannon and Reince Priebus as chief of staff.

"If you don't have that [team] around you, then you will get swamped. So I hope that he appreciated that advice," Obama said.

Obama also said he walked away from his meeting with Trump convinced the president-elect was more pragmatic than his campaign might suggest.

"I don't think he is ideological. I think ultimately is, he is pragmatic in that way. And that can serve him well as long as he has got good people around him and he has a clear sense of direction.

Monday's press conference came ahead of Obama's final foreign trip as president, which will include stops in Greece and Germany before a visit to Peru. He opened by stating that he plans to tell foreign leaders that "there is no weakening of resolve when it comes to America's commitment to maintaining a strong and robust NATO relationship."

Obama also tried to reassure shellshocked Democrats still reeling from the election of Donald Trump, while urging the party to reflect on its campaign defeat and offering a subtle critique of Hillary Clinton's campaign strategy.

"I think it's a healthy thing for the Democratic Party to go through some reflection," he said. "I think it's important for me not to be big-footing that conversation. I think we want to see new voices and new ideas emerge."

He stated that the party needed to appeal to larger swaths of the country, in a subtle critique of the Clinton campaign's focus on several core battleground states that ultimately ended in defeat.