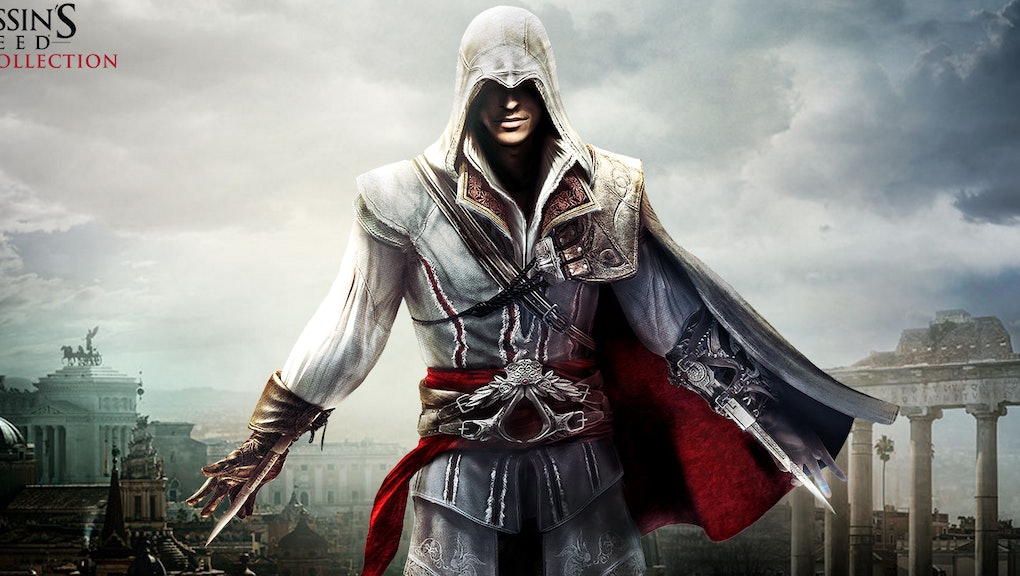 'Assassin's Creed: The Ezio Collection': Tips and tricks for the trilogy on PS4, Xbox One

Assassin's Creed: The Ezio Collection arrives Tuesday, Nov. 15, for PS4 and Xbox One. Whether you're coming fresh to the series or nostalgically revisiting the video game trilogy, you'll probably want to brush up on your assassin knowledge before diving in hidden-blades-first. Here's our roundup of tips and tricks to get the most out of Assassin's Creed: The Ezio Collection.

Ubisoft forum member Carmiel published a detailed guide to the combat system in the Assassin's Creed Ezio trilogy that should come in handy while playing through this new collection. Here are a few tips:

• You'll definitely want to make use of Ezio's hidden blades to pull off some brutal attacks throughout the series. Once you get an enemy's health down to one or two bars, just hold the square/X button to perform a special move. Depending on the situation, Ezio will either jump at the enemy, slit their throat with both blades or quickly stab them repeatedly in the stomach.

• Ezio can also use a sword in combat. That's particularly useful for quickly taking out enemies protected by a helmet. Just dodge an attack and hit them twice from the side with your sword for an instakill.

• You can use your fists to quickly take out enemies as well. Once you knock an opponent over, simply punch them from behind as they get up for a quick kill. You'll also learn to throw sand, which can be combined with a punch for a swift takedown.

• If you're attacking from above, you have two options: Ezio can simply assassinate the enemy, or he can use them as a landing cushion without killing the target by pressing circle/A instead. That's useful for catching messengers and pickpockets that you don't necessarily want to kill.

• Finally, remember that Ezio can pull off high-profile assassinations while in incognito mode. So if you're having trouble completing an important kill, try hiding in plain sight until your target walks by.

Check out these Assassin's Creed II tips and tricks, originally rounded up by GamesRadar+.

• Ezio can sneak around in a variety of ways in Assassin's Creed II to evade guards and other enemies. The easiest option is to simply blend into a crowd or a moving group. As long as Ezio remains grayed out, you're safe. You can even pickpocket the people you're using for cover if you're stealthy enough.

• To attract a group of people for cover, try throwing a few coins into the street to create a quick mob. You can also pay a courtesan to walk with you for protection, or order them to distract a guard instead.

• Don't forget to keep tabs on your notoriety level throughout the game. Your level rises each time you need to run from the guards, but you can lower it through bribes, by tearing down wanted posters or by killing corrupt government officials.

• Money also plays a key role in Assassin's Creed II. Once you acquire some cash, you should use it to buy a treasure map, which will quickly pay for itself. You can also buy extra armor, a medicine pouch and special dyes to change your appearance.

• Later in the game, you can also increase your cash flow by investing in nearby property. You can even buy an old, broken down well, which boosts the town's income and opens up a secret passage leading you to extra treasure.

Here are some tips and tricks for Assassin's Creed: Brotherhood, courtesy of The Average Gamer.

• Trading is a key feature in Assassin's Creed: Brotherhood, so hold onto everything you come across throughout your adventures. Even a tomato or some Buddhist prayer beads could turn out to be useful at some point in the game.

• Money is important as well, and once again you'll want to pick up a treasure map as soon as possible to start tracking down some serious loot. You can also use your money to renovate the banks, which will help you rake in cash later on.

• Make sure to pickpocket everyone you see and loot any corpses you come across. If you're in enemy territory, you can always carry the body to a discreet location first and then check for cash.

• If you hear a twinkling sound, it means there's treasure nearby. You can even jump into settings to turn down "voice" and "music" while keeping sound effects at full volume. That way you'll always notice the sound.

• Moving on to combat, Assassin's Creed: Brotherhood offers an easy way to take out heavily armed guards: Just kick them in the crotch a few times and they're done. Seriously.

• You should also try picking up a pistol or crossbow for ranged combat. The pistol is particularly powerful since it offers one-shot kills. However, it's noisy enough to attract enemy attention.

• Finally, take advantage of the fact that you can't become notorious in the game until after you complete the first thieves memory. Use that time to explore the city and pickpocket as many people as possible with minimal repercussions.

Ready to dive into the third title in the Ezio trilogy? Here are a few helpful tips and tricks for Assassin's Creed: Revelations from The Average Gamer.

• Some things never change. In Assassin's Creed: Revelations, you'll still want to pickpocket everyone you see. Also, kicking your enemies in the crotch continues to be a surprisingly powerful attack.

• To get a treasure map in this game you'll need to spend some money renovating a bookshop. You can also renovate a bank to increase your cash intake.

• Assassin's Creed: Revelations still includes notoriety as a key feature, but now it's referred to as Templar Awareness instead. Your Awareness goes up whenever you buy something, and if it goes too high, all your assassin dens will come under attack from enemy Templars. So watch out.

• To lower your Awareness, you can bribe a Herald or kill a Templar Official. You can also lower it by finding a memory and activating a new section of the main storyline.

• If the Templars do start attacking one of your dens, don't sweat it. First of all, there's plenty of time to get over there and defend it. If you do lose the den, it's not a big deal either, and you're better off training your assassins for other purposes rather than focusing on reclaiming the lost territory.

• Finally, if you do decide to attack an enemy den, it's important to head straight for the Templar leader. Don't bother with all the lowly guards, since they'll run for cover once you take out their boss anyway.

That should be more than enough information to get started playing Assassin's Creed: The Ezio Collection. We'll be back with even more guides soon, though, so stay tuned.