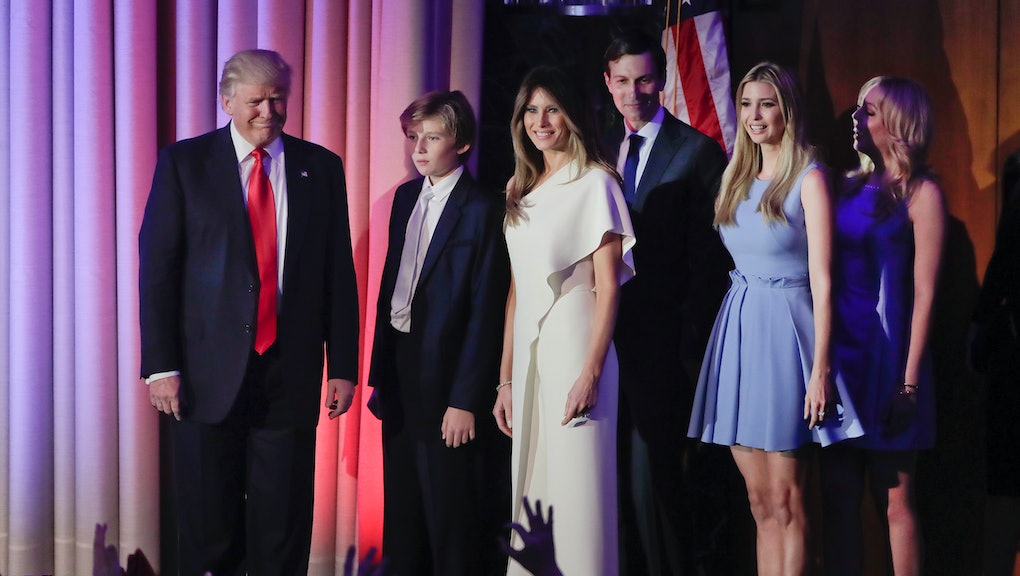 Donald Trump is reportedly seeking security clearance for his children, according to CBS News.

However, a Trump presidential transition team member has denied those reports, stating that the president-elect did not in fact file the paperwork making the request. "That's not something I'm expecting right now," they added.

Security clearances are "granted only to those for whom an appropriate personnel security background investigation has been completed," according to the State Department website. Individuals receiving a security clearance require a determination from the government that they are trustworthy and discreet, as well as possessing sound judgment when handling classified documents.

Concerns flared up when initial reports announced Trump's children may be receiving security clearances, especially related to his financial dealings. Trump's children will reportedly run his "blind trust," basically a mechanism for managing the family business while Trump himself serves in office. That setup alone has caused controversy — typically blind trusts rely on unaffiliated third parties, not direct family members, to manage a person's assets.

The matter is further compounded if Trump's children are given security clearances. Trump's business dealings are global, dealing in multiple countries worldwide. Trump's children would be given secretive information with the security clearances they reportedly requested, creating a huge conflict of interest by possibly allowing them to use that information to further their father's business profits.

It's possible that Trump's children won't receive any security clearances at all, if the more recent reports are to be believed. In addition, federal law prohibits nepotism in governmental hiring, and to receive most White House-sanctioned clearances an individual has to have a role in government.

Still, it's possible that Trump's children could serve in his office through a loophole in the law — the penalty for nepotism is a forfeiture of income. If the president-elect's kids choose to forego a paycheck, they may be able to work in the White House. In that case, they may receive the security clearances after all, allowing them access to both his financial dealings and secretive government information from around the globe, an unprecedented move to be sure.