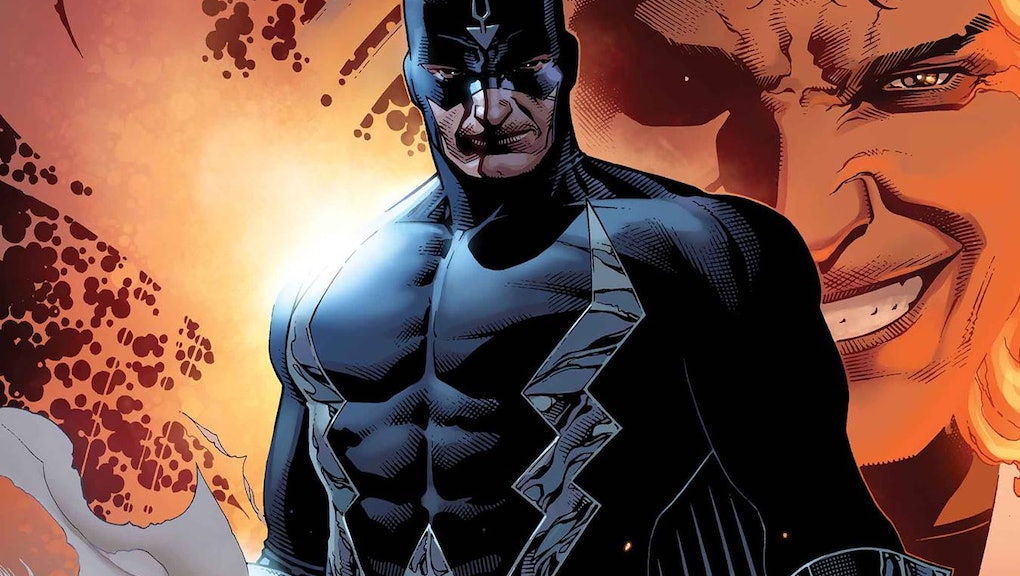 Who are the Inhumans? 4 things to know about the new Marvel TV show

As if there weren't enough Marvel content to peruse on television and in movie theaters, get ready for a TV series about the Inhumans. ABC will air the first season of Marvel's The Inhumans in fall 2017, with a special two-episode preview coming to IMAX theaters in September 2017, per a statement from Marvel.

Now, many could be wondering what the hell the Inhumans are and how many superheroes Marvel actually has, they could end up being one of your favorite superhero teams (they have a dog!). Here are four things you should know about the Inhumans ahead of the show's release.

It was going to be a movie, which could've been clunky.

One of the reasons the Inhumans TV series announcement was a bit of a surprise is that the heroes were originally going to star in their own film. It was pegged for a 2018 release date, and given Marvel's vague updates on the film going into 2016, it certainly seemed like something was amiss.

It turns out they'd rather bring the Inhumans together as a TV series, which might make more sense. An Inhumans movie — depending on how many Inhumans they actually use — could've been clunky. Essentially, there'd be too many characters to introduce and develop in the length of a film.

Granted, Marvel has made this work before; just look at The Avengers and X-Men franchises. But the key difference is that many Marvel fans, and casual comic book readers, know these mainstream superheroes quite well. The Inhumans are a lesser-known group, so giving them a TV show to fully flesh out their stories could be advantageous. Plus, if viewers aren't receptive to the heroes, ABC could just cancel the show after one season.

They have been teased in Agents of S.H.I.E.LD.

Those among us who watch Agents of S.H.I.E.LD. would've already seen the Inhumans featured in the series — though the subplot had a mixed reception. They didn't bring the main heroes of the Inhumans, called the Inhuman Royal Family, instead teasing that these new beings exist in the show's canon.

This is because the Inhumans don't refer to a superhero team, but rather superpowered beings who are, basically, the result of an alien race experimenting on early, primitive humans (the alien race was called the Kree, and the main villain in Guardians of the Galaxy, Ronan the Accuser, was a Kree).

While it's unclear if the Inhumans series will in any way affect Agents of S.H.I.E.L.D., it could open up an avenue for a crossover series, or at least a few episodes where they meet. But for now, this is all to be determined.

Are they an X-Men replacement? Yes and no.

One of the reasons some fans theorize Marvel is pushing its lesser-known heroes on TV and in the movies, like the Inhumans and the Guardians of the Galaxy, is because they want the X-Men franchise — to a certain extent — to fizzle out.

The reasoning behind this theory: 20th Century Fox still has the rights to the X-Men, and they've made (mostly good... and X-Men Origins: Wolverine) movies out of them.

"Building up the Inhumans theoretically allows Marvel to retain the value of mutants without paying Fox a tithe," Andrew Wheeler wrote for Comics Alliance. "The Inhumans are mutant sucralose ... The X-Men should face existential crises. But their biggest existential threat shouldn't come from Marvel executives who are apparently insensitive to what these characters represent."

Is one of the Inhumans an alien bulldog?

Good question. Of the Inhuman Royal Family, the fan favorite will undoubtedly be Lockjaw, an alien dog that can teleport. While Marvel hasn't announced which members of the Inhumans will be featured in the show — aside from Black Bolt and the royal family — we hope they include Lockjaw.