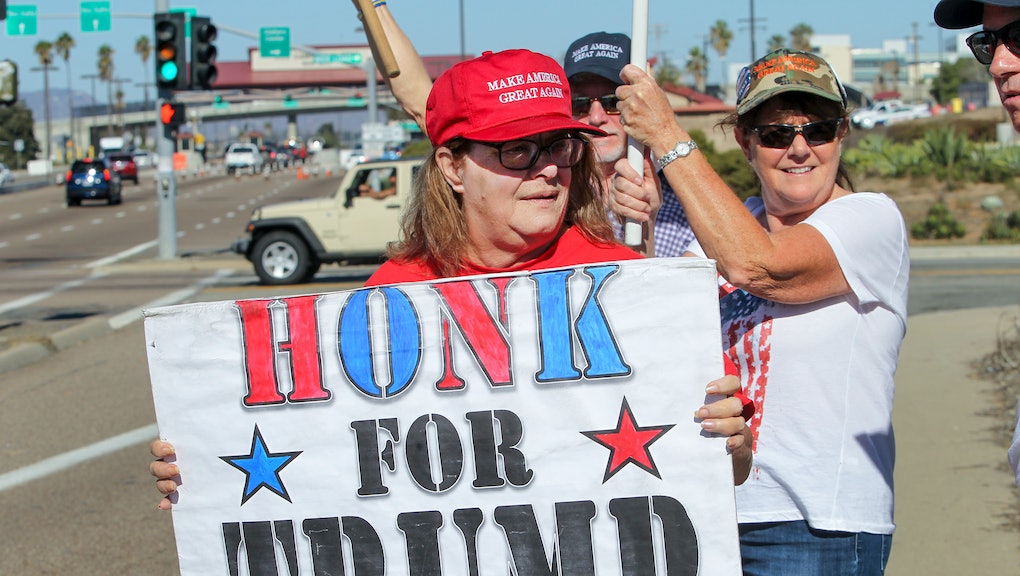 101 reasons why white women might have voted for Donald Trump

Since we learned on Nov. 8 that 53% of white women voted for Donald Trump, I've seen a lot of people expressing shock and disbelief at that number. What were they thinking? How could it be? Don't they have any self-respect? The top two answers I've seen floated so far are "They're racist" and "Nuh-uh, they're not."

I'm a white woman who has lived parts of my life in an all-white exurb, rural Vermont, a near Chicago suburb, a large, cosmopolitan Canadian city, two multicultural but segregated Midwestern cities, and central New York. I have known a hell of a lot of white women, is what I'm saying, and thus feel uniquely qualified to answer the question on everyone's mind: white women, what is wrong with you? Here are my thoughts:

2. They get all their news from Fox, talk radio, Macedonian teens and fundamentalist preachers.

4. They've hated Hillary Clinton since she (check all that apply):

a.) Went by Hillary Rodham, like she didn't even care about having a different last name from her husband.

b.) Said she could have "stayed home and baked cookies" but instead chose to pursue a career.

c.) Didn't divorce Bill for cheating on her.

d.) Allegedly snubbed a woman with deep ties to her enemies on the right who accused her husband of rape.

e.) Spoke of a "vast right-wing conspiracy" against her.

f.) Demonstrated unequivocally that there was a vast right-wing conspiracy against her.

i.) Had the audacity to act like an adviser to President Clinton instead of his helpmeet.

m.) Announced she was running for senator.

n.) Voted for the Iraq War, with grave reservations, because the Bush administration lied to the American public and stoked fear among her constituents.

o.) Announced she was running for president, with no foreign policy experience other than being a first lady.

p.) Cried a single tear after the New Hampshire primary.

q.) Was appointed Secretary of State.

r.) Announced she was running for president again, with too much foreign policy experience.

s.) "Rigged" the Democratic primary against Bernie Sanders by earning 3 million more votes than he did.

t.) Didn't put universal health care in her platform because she had been eviscerated the first time she tried it and didn't want to lose the important gains we'd made with the Affordable Care Act.

w.) Was too outspoken about her personal beliefs.

x.) Was too cagey about her political beliefs.

5. They have really good reasons for hating Hillary Clinton that have nothing to do with her gender.

6. They've hated Hillary Clinton since she was investigated for (check all that apply):

a.) Whitewater. (She did nothing criminal.)

b.) Vince Foster's death. (She did nothing criminal.)

c.) Benghazi. (She did nothing criminal).

d.) Using a private e-mail server for State business. (She did nothing criminal.)

7. They're pretty sure Hillary Clinton is a criminal.

8. They live with white men who really love Trump.

9. Behind closed doors, they are beaten by men who really love Trump.

10. They grew up in the same patriarchy we all did, and have not developed respect for their own bodies and minds as a result.

11. They gain tangible benefits from their proximity to white men, which is sort of like having access to the same power. Sort of.

15. News media's refusal to call abortion clinic bombings and mass shootings of women and girls, usually by white men, what they are — domestic, gender-based terrorism — reinforces the myth that the real threat to women's public safety comes from foreign baddies, as opposed to homegrown hate volcanoes who feel particularly entitled to women's bodies.

22. They live in isolated, homogenous communities, which allows other groups' pain, fears, and needs to be flattened into abstractions.

23. They live in diverse, urban communities, which makes them fearful of the neighbors they don't know, and all of the "bad" neighborhoods.

25. Economic insecurity, sure, why not.

27. Everyone they know hates liberals.

28. When they fight with liberals on Facebook, they usually lose, and it makes them uncomfortable.

29. They've voted Republican their entire lives, and deeply identify with the party.

30. They are suspicious of all politicians, and Donald Trump seemed the least like a normal one.

31. Their parents threatened to disown them if they dared vote for that woman.

33. Rightly or wrongly, they feel hated and abused by Democrats, and they wanted to return the favor.

34. They do not believe Democrats care about working people.

36. Everyone at their church seemed to support Trump.

37. Everyone at their work seemed to support Trump.

38. Everyone in their family seemed to support Trump.

39. Everyone in their town seemed to support Trump.

40. They didn't want to feel isolated from everyone they know.

41. Internalized misogyny is a hell of a drug.

42. They are single-issue anti-abortion voters.

43. They are single-issue "stop ISIS, whatever that actually means" voters.

44. They are single-issue anti-immigration voters.

45. They couldn't conceive of putting a woman in charge of the U.S. military.

46. They're young and don't know any better.

47. They're old and never learned any better.

48. They're still mad that Bernie lost the primary and decided to throw a tantrum.

49. They get all of their news from US Uncut, Occupy Democrats and The Intercept.

50. They think Trump will bring the revolution faster.

51. They picture "the revolution" being a relatively polite affair.

52. They are not good at thinking things through.

53. They wanted to send a message to the DNC.

54. They have no sense of history whatsoever.

55. They really enjoyed The Apprentice.

57. Or at least people who appear to be very rich.

58. They are tired of feeling like they have to hide their bigotry, so they find Trump's candor about his own refreshing.

59. They belong to a religion that believes women should never lead men.

60. They come from a family that believes women should never lead men.

61. They are so young they actually think sexism will not be a part of their futures.

62. They have been so conditioned by patriarchy to value themselves chiefly as objects of male attention, they think sexual assault is a compliment.

63. They don't believe the women who reported that Trump assaulted them.

64. They don't believe Trump's own words on the matter.

65. They believe Ivana's retraction of her claim that Donald raped her more than the claim itself.

66. They live in a culture that deeply, deeply mistrusts and often punishes women who report sexual violence.

67. They were told, "Oh, lighten up and quit overreacting" so many times when they tried to talk about sexism, they finally decided the safest thing was to stop thinking about it.

68. They believe Hillary Clinton is too ambitious.

70. They just do not trust that woman.

71. They live in a culture that deeply, deeply mistrusts women.

72. They like being the "cool girl" who can hang with the guys.

73. They're worried about losing their guns.

74. They're worried about losing their way of life.

75. They want to preserve a way of life that involves very few people of color or non-Christians.

77. They live in a community that mocks things like women's studies classes.

78. They won money at one of Trump's casinos.

79. They do not understand how government policies affect them.

81. They are confused by the Affordable Care Act, so they reject it.

82. The Affordable Care Act has come to symbolize their fear of a black president, and they feel that overturning it will restore the natural order of things.

83. They are scared (legitimately) that their health insurance will soon become prohibitively expensive, and they believe (erroneously) that this is the fault of liberals.

84. They are the kind of people who would rather throw out a broken thing than fix it.

85. They got fired up at Trump rallies.

88. They are scared for their children, and they can't even say exactly why.

89. They want their children to grow up in a country that reflects their values.

90. They want their children to grow up to be white supremacists.

91. They want their children to adhere to strict gender roles.

92. They want their children to be straight.

93. They want their children to believe that homosexuality is a sin.

94. They don't want their children exposed to other religions.

95. They don't want their children to learn about sex or evolution in school.

96. They hope the south will rise again.

97. They think feminists are bra-burning manhaters.

98. They think we're so post-feminist, the first woman president wouldn't even be an interesting milestone.

Editor's note: If you have a story about why you are a white woman and supported Trump – reach out to us! We'll run the best responses. Send an email to tips@mic.com