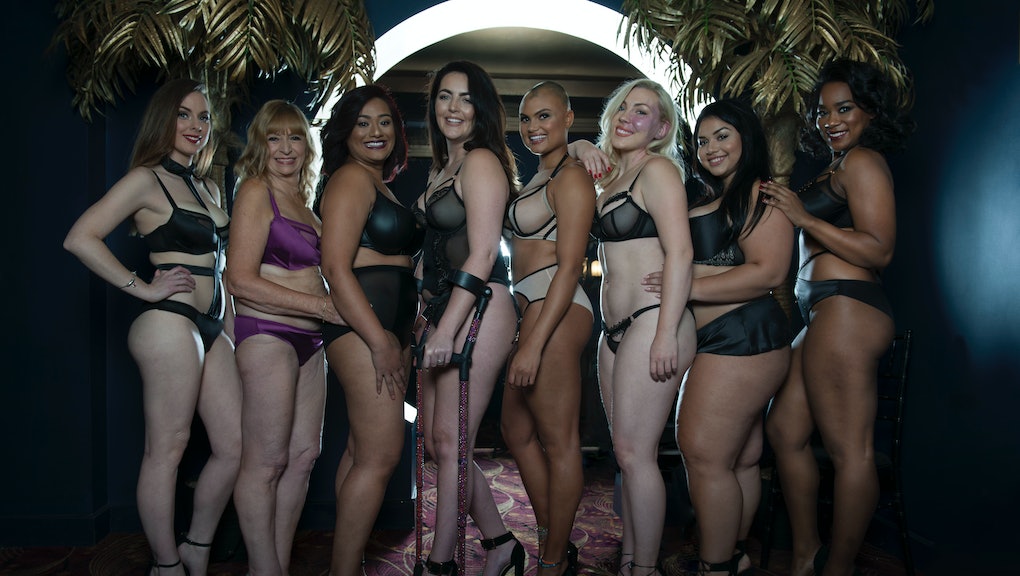 For decades, lingerie campaigns have typically been comprised of tall, thin white women contorting their bodies into unthinkable positions while in a boudoir or mansion. All of the models have flat bellies and gravity-defying breasts. Most often, there's not a stretch mark to be seen, not a stray hair to be found.

And that's pretty dull, isn't it?

So, in an effort to disrupt the lingerie industry's longstanding obsession with thin, white, tall cisgender women yet again, Curvy Kate, a fuller bust lingerie brand out of the United Kingdom, has released its second #TheNewSexy campaign — you can see the first one here — to show that there really isn't one definition of "sexy."

In order to really speak to the beauty and importance of inclusivity in fashion, Curvy Kate has brought on a new roster of incredibly diverse women to model its lingerie.

There is, for instance, Carla Atherton, a breast cancer "previvor," who, after being tested BRCA1 gene opted to have a bilateral preventative mastectomy. To her, being included in this campaign is all about representation for people like her.

"Women come in all shapes and sizes; curvy, slim, tall and small which don't fit into what is being portrayed in the mainstream media," Atherton said in a blog post. "Don't get me wrong, the women are beautiful and sexy in their own right but they do not represent all women. They certainly do not represent women like me, who have had to undergo major surgery. I am confident and sexy with how I am now, I am a new kind of sexy and it doesn't take having my breasts removed to change that."

Then there's Gemma Flanagan, who uses a wheelchair because she has Guillain-Barré syndrome. "The industry is so powerful and has so much influence over us all that it should take more responsibility for the images it portrays," Flanagan said in a blog post. "Diversity isn't a novelty that should be 'used'. It should just be the norm."

In addition to these models, there's also Paige Billiot, who was born with a birthmark across her face, as well as Diana Sirokai, a body-positive Instagrammer and Shorntay Allen, who is passionate about women of color being represented in the media.

But what really makes this campaign stand out is not just the models themselves, but the company's more authentic dedication to showing women like them in their campaigns. Curvy Kate could have very well just done its one #TheNewSexy campaign back in June and called it a day, but it instead is making sure that diversity isn't just a one-off attraction for brands.

"Our campaigns aren't one offs — they're here to stay as we believe it's important for all women to see people who look like them in the media," Hannah Isichei, Curvy Kate's head of PR and marketing, said in an email. "Our dream is to make the use of older women, women of color, different shapes, looks and abilities the norm in the modeling world. So that eventually a campaign like this isn't newsworthy. People will simply say, what great lingerie — and gorgeous women modeling it."

Curvy Kate joins other companies like Neon Moon and & Other Stories and Selfridges and Lonely that have, in just the past year or so, also made a concerted effort to not airbrush and let the women in these ads have a voice and shine. Really, they've served as the antitheses to companies like Victoria's Secret, which shows no true intention of augmenting its perfectly airbrushed image.

"We strive to make all women feel gorgeous," Isichei said. "Our message isn't made for one customer, it's for every customer. Our customers are made up of women from all walks of life, different shapes, sizes, looks, ages and abilities — so our models should represent this."

So, for any lingerie or clothing companies that still doubt the power of images like these: Take a good look at this.