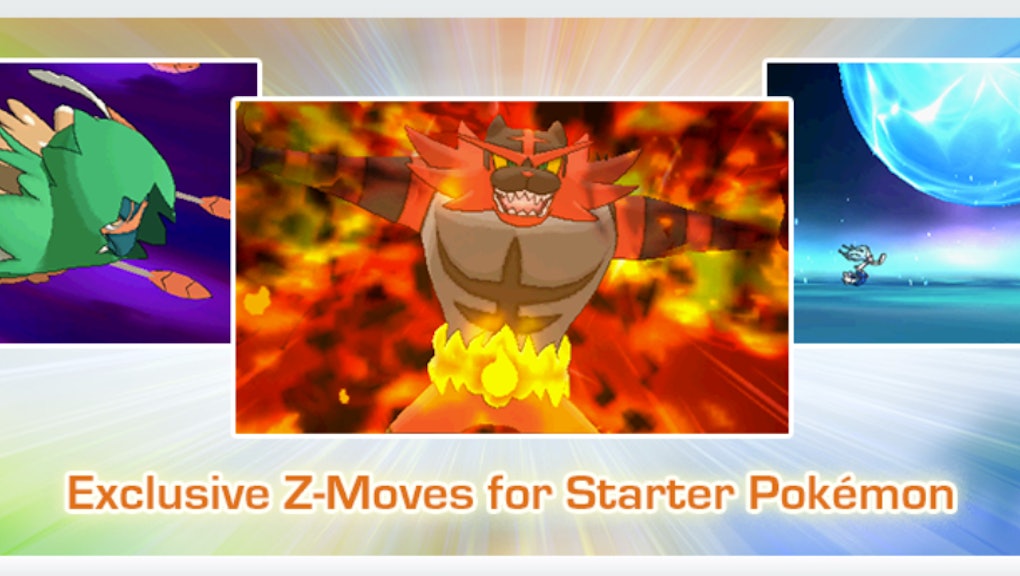 Pokémon Sun and Moon is almost here, which means it's time to pick your starter. If you're still having trouble choosing between Litten, Rowlet and Popplio, this video revealing their powerful final evolution Z-Moves in Pokémon Sun and Moon may help you make a decision.

The video, which was released by the Pokémon Company this week, offers a first look at the earth-shaking Z-Moves each starter can carry out once they evolve into their final forms. Check it out now and then read on for a detailed breakdown below.

Pokémon Sun and Moon starter final evolutions: Who has the best Z-Move?

All three Pokémon Sun and Moon starters get awesome Z-Moves once they reach their final evolutions.

Once Litten transforms into Incineroar, it can carry out an epic attack called Malicious Moonsault. The enemy becomes trapped in a wrestling ring and your Pokémon delivers a brutal and fiery body slam. Ouch!

Finally, there's Popplio. This goofy-looking water-type seal Pokémon evolves into a majestic Primarina with a Z-Move called Oceanic Operetta. The attack causes a giant globe of water to come crashing down on the opposing Pokémon.

We also have some stats for all the Pokémon Sun and Moon starter Z-Moves, via PokéCommunity Daily:

Sinister Arrow Raid: This is Deucideye's Z-move. It is a physical Ghost-type Z-move with 180 Base Power. This only works with Spirit Shackle.

Hopefully, that's enough information to help you make a decision when it comes to picking your Pokémon Sun and Moon starter.

Pokémon Sun and Moon: What are Z-Moves?

Z-Moves are a brand new feature in Pokémon Sun and Moon. Essentially, they're extra-powerful attacks that can only be used once in each battle, but there's a bit more to it than that.

Z-Moves are unleashed when "the Trainer and Pokémon's wishes resonate with each other," according to the Pokémon Company, resulting in an "explosive force."

You'll also need a few extra items called Z-Rings and Z-Crystals. To pull off a Z-Move, you need to make sure your Trainer and Pokémon are holding the same type of crystal or the attack won't work. It's still unclear how you find those items; you'll have to play Pokémon Sun and Moon to find out.