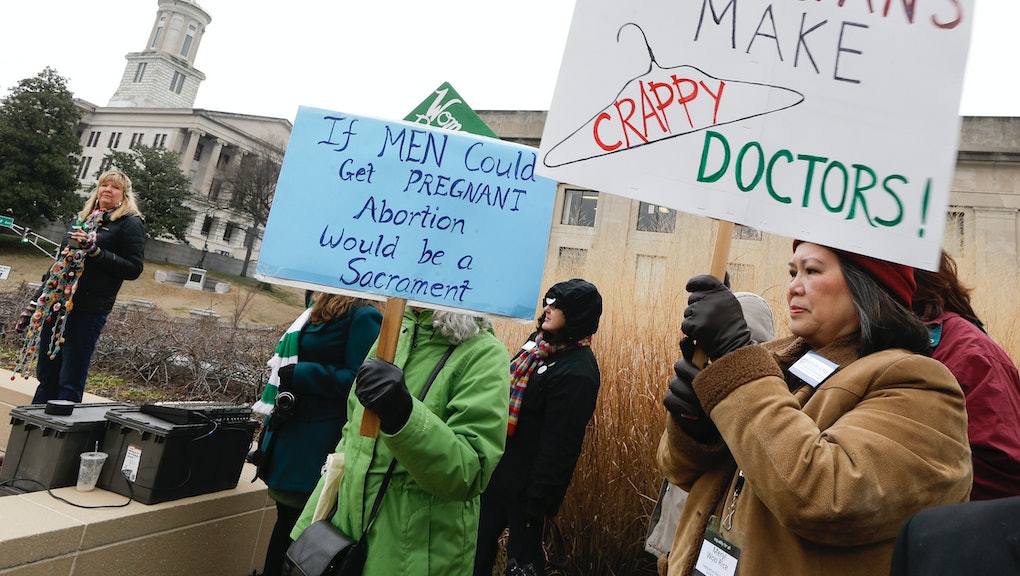 The case of Anna Yocca — a Tennessee woman who, in September 2015, used a coat hanger to self-induce an abortion — speaks loudly to that trend. The charges against Yocca have changed a few times, but on Nov. 12, a Rutherford County, Tennessee, grand jury added a trio of felonies to her docket: aggravated assault with a weapon, attempted procurement of a miscarriage and attempted criminal abortion, according to Jezebel.

Yocca was in the 24th week of her pregnancy when she climbed into her bathtub and tried to perform her own abortion. According to Mother Jones, her boyfriend took her to the hospital after she "began to bleed uncontrollably." The child survived, but with severe and lasting damage to its vital organs, Raw Story reported. It weighed just 1.5 pounds at delivery.

In December 2015, Yocca was charged with attempted first-degree murder, which was eventually adjusted to aggravated assault. In October, Yocca's attorney, Gerald Melton, argued that his client was incarcerated under laws that didn't apply to the incident at hand. Melton was referring to Tennessee's fetal assault law, in place when Yocca tried to induce abortion, but has since been repealed. The law provided for the prosecution of pregnant women whose behavior risked harm to her fetus, generally through the consumption of drugs or alcohol.

Even with the fetal assault statute's repeal, though, Tennessee's abortion laws are highly restrictive. In May 2015, Tennessee's governor, Bill Haslam, signed into law a bill that instituted a 48-hour waiting period between an initial abortion consultation and the actual procedure. As the Tennessean reported, there were seven abortion providers in the state at the time, some of which were threatened by restrictions passed that same month.

All of which is to say, Tennessee is not a state that makes it easy for a woman to end a pregnancy legally before viability. While Yocca's attempt at self-induced abortion is tragic, it's not at all unusual: Whereas increased access to abortion usually translates to fewer abortions performed, making abortions harder to get only makes them more dangerous.

This pattern holds globally: According to the Lancet's most recent survey, while overall abortion rates around the world didn't change much between 1995 and 2008, unsafe abortion rates increased from 44% to 49%. The regions responsible for the uptick were those in which abortions were harder to procure.

We see the same thing in other parts of the U.S. Take Texas, for example, a state with notoriously restrictive abortion laws. According to a 2015 study, at least 100,000 and as many as 240,000 women living in the Lone Star state had attempted to self-induce an abortion in their lifetimes. What's more, the study's authors concluded, as clinic closures become more frequent, so will self-induced abortion.