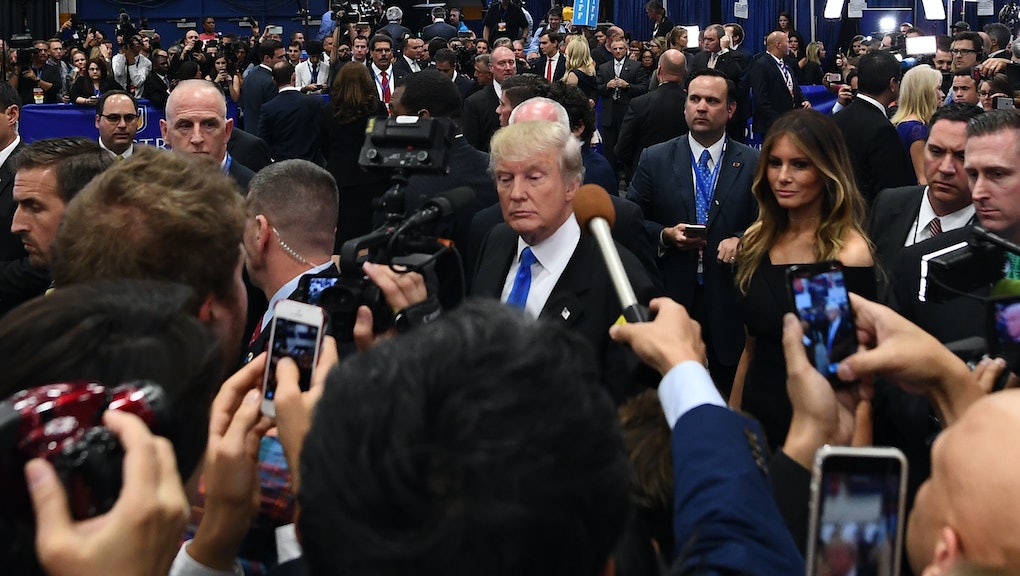 President-elect Donald Trump's disdain for the press is already legendary, so it's no surprise that his team pushed back on Wednesday when questioned about why he ditched reporters assigned to cover his every move the previous evening.

Trump has been ensconced at his midtown Manhattan skyscraper as he conducts a series of meetings about what his incoming administration will look like.

On duty to report on the incoming president's activities, as historically has been the case: A small, rotating team of reporters who gather information and disseminate it to the greater press corps.

Tuesday, however, Trump gave the poolers the slip, taking off for dinner at a restaurant after reporters were told there was a "lid," or that he was in for the evening. That led first to a scramble to find him, and then an outcry about his breach of protocol.

Trump spokesman Jason Miller, addressing those concerns Wednesday — per a pool report — walked a line on questions about the president-elect heading off to the 21 Club Tuesday night without informing the press.

Miller said that during the transition, there is no "formal pool structure," but that will obviously change when Trump officially takes office in January.

"One of our goals from the transition team is to improve the communication with members of the press and get that in a better place so folks are given timely and accurate information. Do we always bat 1.000? Not necessarily. Last night probably was an example where there could have been a little bit better communication," Miller said.

On the flip side, he added:

I would also say — would also stand up for the president-elect and say that, for some in the media, unless they're actually sitting at the table, seeing if he's getting the chicken or the fish, that they will never be happy. And there always needs to be some kind of balance for respecting some degree of privacy. But to your initial point, we do think that there will be improved communication and our goal is to make sure that something like last night doesn't happen again.

The White House Correspondents' Association issued a a statement saying the group was pleased to hear Trump's team had committed to upholding the tradition of a pool, which not only provides timely information about the president or president-elect, but preempts a continual media circus by channeling that information to the greater press through a small group of reporters:

Trump supporters and media critics gleefully took to Twitter with send-ups of the press outcry over the pool debate.

Some said the incoming president is entitled to his privacy and doesn't need to be dogged by reporters; others jeered that the mainstream press just can't be trusted to cover Trump fairly.

In addition to the White House Correspondents' Association and individual reporters and outlets, the Society of Professional Journalists added its voice to the entreaties to Trump.

SPJ urged Team Trump to make sure reporters have access to information about the future leader of the free world and his activities in the name of the public interest — including that of those who voted for him.

Pool reports continued to arrive steadily Wednesday, with assignments for coverage set up through the end of the month.