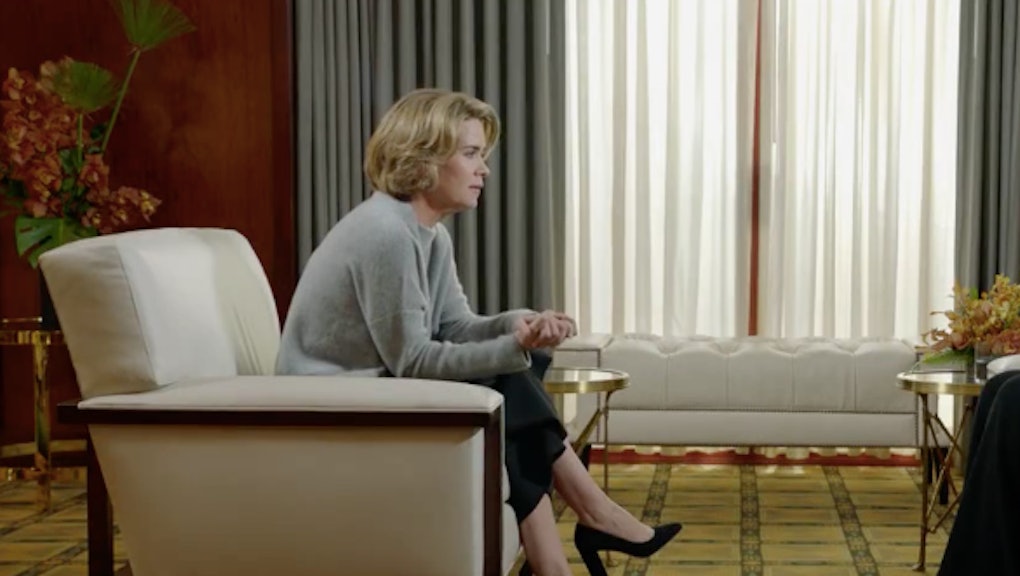 The American Horror Story season six finale just answered a question that has been haunting fans since season two: What happened to Lana Winters?

Lana Winters, was a journalist who was introduced in Asylum. She infiltrated Briarcliff Asylum in order to gain access to an alleged serial killer who was admitted to the facility, but ended up wrongfully imprisoned there herself. She was last seen reuniting with her son Johnny, whom she gave up for adoption as a baby.

Johnny was the result of Lana being raped by Oliver Thredson, a doctor at Briarcliff and the real serial killer. Just like his father, Johnny became a serial killer named Bloody Face. He eventually found his mother and was going to kill her, but Lana turned the tables on him. After getting Johnny to let his guard down, Lana stole his gun and fatally shot him.

Lana reappeared in American Horror Story: Roanoke to interview Lee Harris, the sole survivor from Return to Roanoke: Three Days In Hell. Lee was brought up on charges for killing three people during the filming of the show — all of which were caught on camera. Despite the evidence, she was acquitted of all the charges. But she wasn't in the clear just yet. The police then went after her for the murder of Mason, her ex-husband. Although Lee's daughter Flora claimed to have witnessed her mother killing her father, the jury found Lee not guilty.

Lee may not have had to serve time for the crimes she committed, but she did pay the price. Flora refused to forgive her mother for murdering her father and chose to live with her grandparents. In order to win back her daughter, Lee agreed to an interview with Lana Winters, who came out of retirement for the exclusive opportunity.

Lana's comment about coming out of retirement revealed how the season of Roanoke fits into the American Horror Story timeline. The Lee interview happened after Lana was forced to kill her son. In fact, that was the reason why Lee agreed to the interview. She turned down offers from Diane Sawyer and Barbara Walters because of what Lana had been through.

"You killed your own son," Lee tells her in the season six finale. "Bloody Face."

And what happened to Lana Winters after she fatally shot her son? She didn't go to jail!

"I killed a psychopathic murderer before he could kill me," Lana counters. "And I did what I had to do."

So, there you have it. Lana Winters did not go to jail for murder. The death of Bloody Face was self-defense.