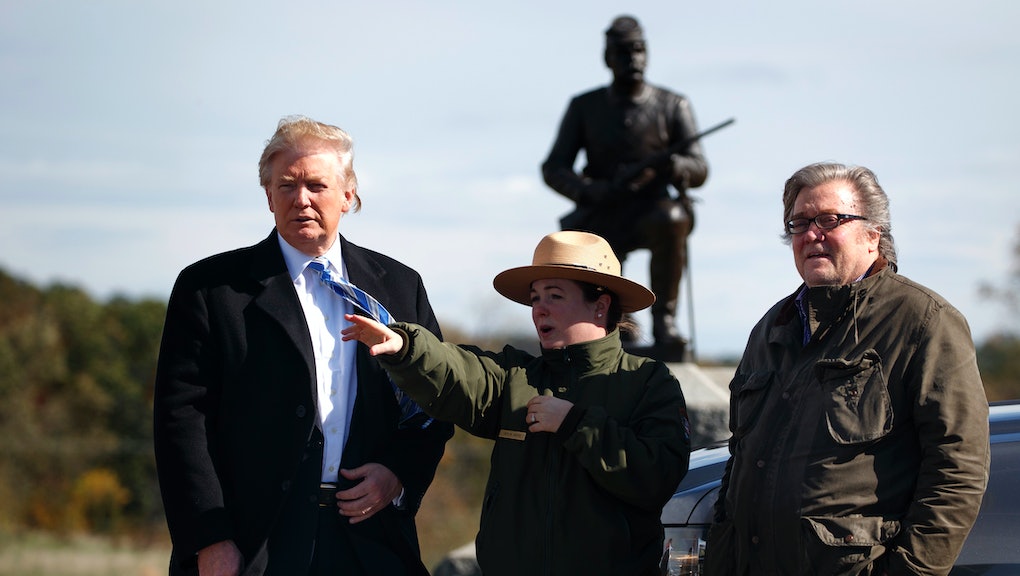 What does a chief strategist do? 5 things to know about Steve Bannon's new role

While much still remains to be seen about Donald Trump's impending presidency, what his cabinet will look like is — for better or worse — slowly coming into focus. On Saturday, Trump named Breitbart's Steve Bannon the chief strategist and senior counselor to the president.

The appointment of the highly controversial Bannon, who has raised red flags for his white nationalist and anti-Semitic viewpoints, has left many shocked and concerned about what the far-right conservative will be able to do in his new role, which President-elect Trump has said will be an "equal partner[ship]" with chief of staff Reince Priebus.

Here are five things you should know about the role of chief strategist:

It's not a traditional White House job

Unlike more structured White House positions like chief of staff or secretary of state, the role of strategist or advisor to the president isn't one that's particularly well-defined — or even required at all. The role is a relatively new one in the White House: Presidential historian Michael Beschloss tells the New York Times that the role of White House counselor likely dates back to President Franklin Roosevelt's aide Louis Howe, and was only implemented more officially by President Richard Nixon and his longtime advisors H.R. Haldeman and John Ehrlichman.

The best-known example of the presidential counselor in recent memory is George W. Bush's powerful strategist Karl Rove, while President Barack Obama has relied on David Axelrod, David Plouffe and Dan Pfeiffer as his senior advisers. How these people have functioned in the role, however, has depended largely on who's occupying the Oval Office, and even where the president is within their term.

Plouffe, who served as President Obama's senior adviser during his third and fourth years of the presidency, dealt largely with connecting Obama's administration and re-election campaign, while Pfeiffer's tenure during Obama's second term was more focused on the president's long-term strategy. When Pfeiffer was appointed to take over Plouffe's position, Plouffe told the New York Times, "You can't really look at it as a direct replacement. Even Axe and I, we didn't do exactly the same thing."

There are no administrative duties

Following Bannon's appointment, Axelrod told the Wall Street Journal that, while it was hard to say what exactly Bannon would do in his new role, "the fact that he's not chief of staff implies that he won't control hiring and administrative decisions." Indeed, RNC Chairman Preibus will serve as, literally, the chief of the White House staff in addition to advising the president, and will be tasked with staffing the executive branch as well. Bannon's role, on the other hand, won't involve such administrative tasks, putting more of a focus on his relationship with the president himself.

They take a long-term view

While presidential strategists typically wield a lot of power regarding daily decisions, they also take a longer look at what effects these daily decisions will have down the line and think strategically about the president's entire tenure, rather than what immediately lies ahead.

About his role as senior advisor, Plouffe told the New York Times: "The president does want someone who's thinking down the road a little bit — it's hard to describe. The role is really to make sure you're thinking about things strategically, you're thinking about the next move or two or three, you're providing some guidance on messaging."

This long-term perspective, of course, also includes the re-election campaign. In his 2004 victory speech, President Bush called Rove the "architect" of his campaign, while Plouffe described his role as Obama's senior advisor as the "connective tissue" between Obama's administration and 2012 campaign. The reliance on these sorts of advisors in recent years, Beschloss tells the New York Times, is reflective of "the whole idea of the permanent campaign," with presidents now having to worry about lengthier campaigns and appealing to voters outside of election years.

Senior advisors have also been largely responsible for protecting and crafting the president's message and overall "brand." The Wall Street Journal notes that recent advisors have often been media surrogates for the president when trying to gather public support, or serve as a conduit between the Oval Office and public-interest groups. Both Axelrod, a former journalist, and Pfeiffer, who first served as the White House's communications director, made their communication backgrounds into part of their job description as senior advisor. Axelrod was described by the New York Times as "the protector of the Obama brand," while a 2015 New York Times article details Pfeiffer's "obsessive preoccupation with disseminating the president's message," including leading the president's social media strategy.

"An important thing [about the job] is to view decisions through the prism of 'Is this true to who we are?'" Plouffe told the New York Times. "[It's] a judgment on 'Is this consistent with what we campaigned on, and who he is?'"

This focus on messaging means that Bannon could drive Trump's messaging and continued brand as president to be one that sticks more closely to the divisive rhetoric and racist beliefs behind Trump's more extreme campaign claims, rather than the establishment conservative politics likely to be championed by Preibus and Speaker of the House Paul Ryan. He may also continue to champion Trump's anti-media stance as he cultivates Trump's larger public message, which includes recent attacks on the New York Times.

Ultimately, they have a lot of say

The flexible and ever-changing nature of the strategist position means that, as President George H.W. Bush's chief of staff John Sununu told the Wall Street Journal, "only Trump knows what he wants Bannon's job to be." The Journal also speculated that the undefined nature of Bannon's job description could mean that other advisors (or potentially even family members) could try to downplay his influence.

But make no mistake: Based on how past advisors have served the Oval Office, Bannon will likely have a lot of power. Journalist and Rove biographer Lou Dubose told the Guardian in 2004 that Rove's position was "an enormous position of power, and it's hard to overstate." And with Trump's dearth of experience in politics, it's likely he'll be relying heavily on those around him. We'll have to wait and see how Bannon will wield his position of power, but it's clear that those discomfited by his radical beliefs may have serious cause for concern.