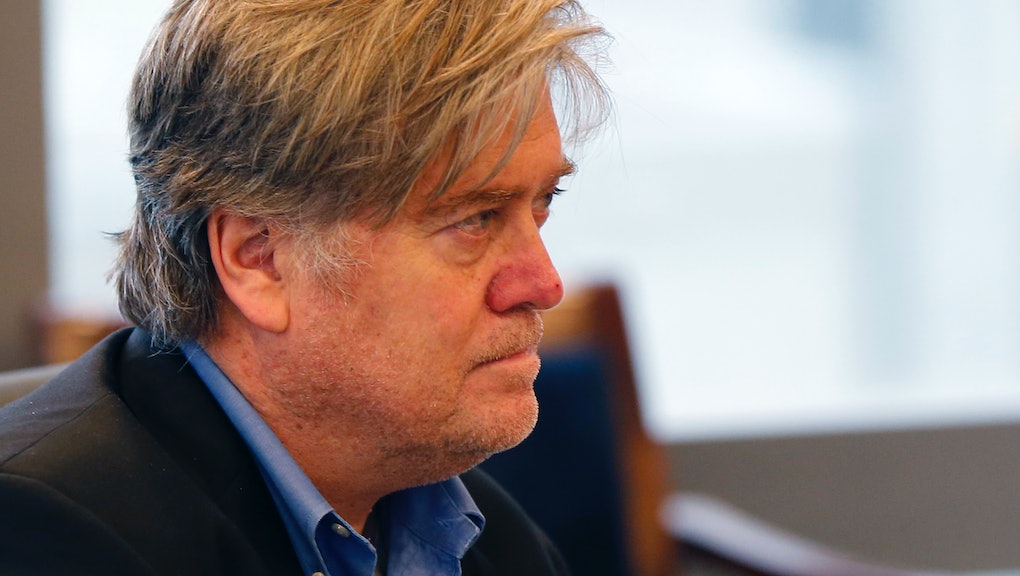 Donald Trump was a guest on Breitbart News Daily on Nov. 5, 2015, a show hosted by his newly appointed chief strategist Steve Bannon. The choice to bring Bannon into the White House has been met with outrage, given Bannon's outspoken white supremacist and misogynistic viewpoints.

And a clip from the 2015 radio show adds fuel to the fire after Bannon is heard saying factually incorrect, racist remarks about Asians.

"I think that's terrible," Trump said on the show, referring to immigrants from Asia who went to "Harvard, Yale, Princeton, Penn, Stanford, all the greats" and then got thrown out of the country. "We have to be careful of that, Steve. You know, we have to keep our talented people in this country."

When Trump asked Bannon if he agreed with this sentiment, rather than answer Trump's question, Bannon pointed to how many Asians hold leadership positions in Silicon Valley.

"When two-thirds or three-quarters of the CEOs in Silicon Valley are from South Asia or from Asia, I think ..." Bannon said, the Huffington Post reported. "A country is more than an economy. We're a civic society."

The statement itself is also discriminatory. The implication that there is such thing as "too many" Asians is racist. The belief that there can be too many of any ethnic group is a disconcerting belief to be held by someone who may have the power to greatly influence the president of the United States.