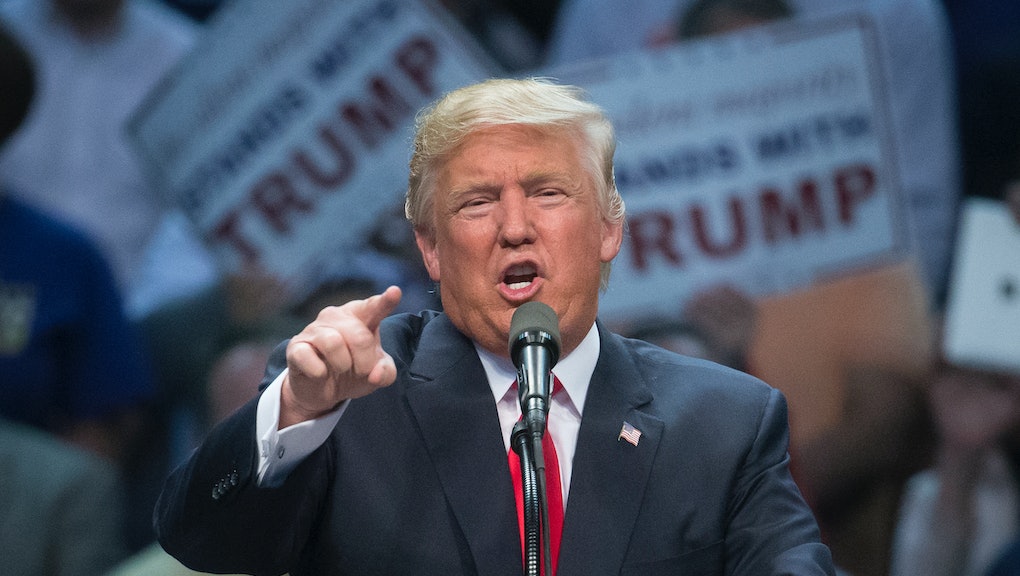 Donald Trump is an internet troll with a history of bigoted, misogynistic, Islamophobic attacks. He uses his online influence as a weapon, reportedly threatening to sic his "beautiful Twitter" (and the army of white supremacist trolls who follow it) on people who cross him.

Twitter's hateful conduct policies exist to deal with users like Trump, and he has apparently violated the rules many times over. Still, it would be surprising — and historic — if Twitter made a move to suspend him: @realDonaldTrump, of course, is now our president-elect.

Twitter's hateful conduct policy reads as follows: "You may not promote violence against or directly attack or threaten other people on the basis of race, ethnicity, national origin, sexual orientation, gender, gender identity, religious affiliation, age, disability or disease. We also do not allow accounts whose primary purpose is inciting harm toward others on the basis of these categories."

In real life, Trump has mocked a reporter with a disability, called Mexicans "rapists" and bragged about sexually assaulting women. But his free-flowing rhetoric on Twitter alone could be enough to merit discipline on his favorite social media platform.

Twitter did not respond to repeated requests for comment. But let's sample some of Trump's tweets anyway. Are they enough to merit a deletion, suspension or ban?

Twitter is cracking down on "behavior that incites fear about a protected group."

"We enforce policies when someone reports behavior that is abusive and targets an entire protected group and/or individuals who may be members," the policy states.

In May, Trump tweeted that Mexicans are "thugs" and "criminals."

What else is banned on Twitter? "Repeated and/or non-consensual slurs, epithets, racist and sexist tropes, or other content that degrades someone."

In September, Trump slut-shamed and degraded former Miss Universe Alicia Machado, encouraging his supporters to dig up her sex tape (which doesn't exist).

Here's Trump calling Fox News' Megyn Kelly a "bimbo" and posting photos of her in an effort to publicly objectify her.

If Twitter banned Milo Yiannopoulos, Donald Trump should be next: Both command followers who attack vulnerable groups in their name.

Trump's rise to power has coincided with spiking hate crimes and anti-Semitic online harassment. It seems Twitter has identified white supremacists — a group that overwhelmingly supported Trump for president — as a threat to its community.

In July, leading ethno-nationalist and alt-right mouthpiece Milo Yiannopoulos was permanently banned from Twitter after cheering on a campaign of misogynistic and racist harassment toward actress Leslie Jones.

Twitter has identified white supremacist trolls — a hate group that overwhelmingly supported Trump for president — as a threat to its community.

"We are continuing to invest heavily in improving our tools and enforcement systems to better allow us to identify and take faster action on abuse as it's happening and prevent repeat offenders," Twitter said in a statement to BuzzFeed about Yiannopoulos' ban.

Trump has exhibited eerily similar behavior to Yiannopoulos'. "I almost unleashed my beautiful Twitter account against you, and I still may," Trump allegedly told Megyn Kelly, according to her book. The threat was retribution for her discussing Trump's ex-wife Ivana on her show, she wrote.

"We know many people believe we have not done enough to curb this type of behavior on Twitter. We agree," Twitter, which has faced repeated criticism for failing to curb abuse, told BuzzFeed.

If Twitter wants its new polices to be taken seriously, it should remove its biggest troll: Donald Trump.