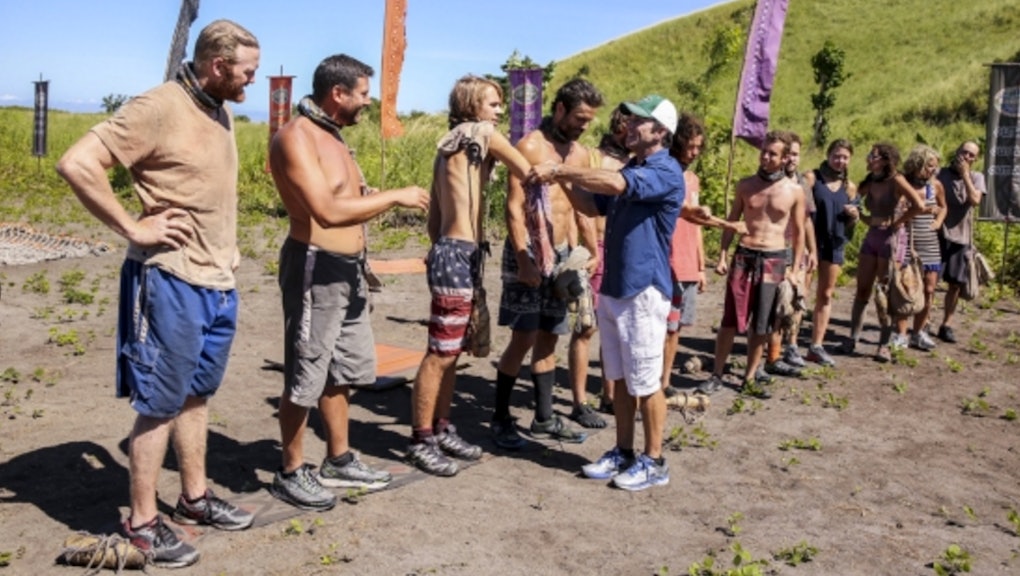 Welcome back to Survivor's 33rd season, where white dudes, white dudes and more white dudes — sorry, I mean Millennials and Generation Xers — are now competing in one, merged tribe.

After last week's Tribal Council, Taylor Lee Stocker, Justin "Jay" Starrett and Will Wahl seem like they're the next to go. Will present alliances hold true, or can the so-called "bro alliance" shake things up and send someone else home? Despite a valiant attempt to avenge his long-lost girlfriend and move the target toward Adam Klein instead, Taylor becomes the ninth person voted out.

Let's get down to business. Back at camp after Tribal Council, Taylor knows he could be next to go.

Herein begins Taylor's epic journey: a last-ditch attempt to avenge his eliminated girlfriend, Jessica "Figgy" Figueroa — and perhaps spare himself from getting sent home too. Step one? A private conversation with rival Adam, where the two make a flimsy pact. Taylor promises not to tell anyone about Adam's advantage in the game — that he can steal someone else's Reward — if Adam doesn't tell anyone Taylor stole jars of food and buried his private stash in the sand.

I want to support Taylor in his romantic quest for love and victory, but I can't. In a private to-camera interview, he complains the pretzels he stole are "getting a little bit soggy" from all the fruit in the jar. Can Taylor not win, please?

Meanwhile, Jay does what he can to spare himself from elimination too. In a conversation with Hannah, he says he's proud of how she made a big move by voting alongside the Gen Xers — and begs her to include him in the next one.

The Reward Challenge comes quickly. In a schoolyard-style pick, the tribe is divided into two teams of six. Each team has to complete exhausting-looking obstacles, retrieve a key, unlock a box, drag the box underneath an annoying net, open the box and — finally — throw a series of bolos around some horizontal poles. Whew!

Post-merge, the Rewards get fancier; this week, the six winners get to enjoy a feast at a swanky resort. Alcohol will also be served — but not to Will, who is approximately 1-year-old. If Will wins, he only gets soft drinks. This fact is stated repeatedly throughout the episode. Sucks to suck, Baby Will!

Back at camp, Jay is depressed about his perceived losing streak. To make things worse, Adam goes out of his way to remind Jay that Jay is on the bottom.

How rude! Can you believe Adam? The Millennials certainly can. Jay, Will, Hannah Shapiro and Zeke Smith all agree that Adam is irritating. Might they vote for him over Taylor, Jay and Will, just to make him go away?

Meanwhile, Sunday decides on a confusing way to make a big move: with Jay on her side, recruit a bunch of people to vote out Jessica Lewis. Sunday voted for Jessica once, and there's animosity between them, Sunday reasons. But why meddle now, Sunday? You're totally safe this week!

Immunity Challenge Time. The castaways have to stand on a beam while balancing a ball on a curved piece of wood. But wait — there's a twist! If you choose to sit out, you can chow down on grilled ham-and-cheese sandwiches and potato chips. There's also beer, but not for Will! Will hasn't even been conceived yet, so he can only have soft drinks.

Zeke and Will choose to sit out and feast — no beer for Will, though! Meanwhile, the challenge begins. Losing this one is extra painful: Not only do you not get Immunity, but you have to sit on the sidelines in shame, knowing you could have been eating grilled cheese this whole time.

Taylor comes close to winning, but Ken — who was at no risk of going home this week — wins Immunity.

Things aren't looking good for Taylor and Jay. Will's on the bottom, too, but as David points out, he's unthreatening enough to keep around a little bit longer. The majority alliance from last week's Tribal Council — Adam, Jessica, Sunday, Zeke, Hannah, Chris and David — agree to split their votes between Taylor and Jay.

Still desperate for some screen time this season, Sunday tells Jay about her alliance's plan. She also tells Jay she'll try to turn the votes against Jessica — but none of her other pals seem particularly interested. Orchestrating big moves can be helpful — no one wants a winner who barely played the game — but now isn't the best time for Sunday.

Speaking of Taylor's secret food stash, remember that "promise" he made with Adam? Initiate step two of Taylor's Epic Journey: telling Jay about Adam's advantage. In what could be his final hours, can Taylor turn his tribe-mates against his nemesis?

"I am an avenger of Figgy's, at this point," Taylor nobly declares.

Meanwhile, Jay has a decision to make. Knowing he and Taylor are in trouble, should he play his hidden Immunity Idol?

At Tribal Council, Taylor initiates the final and most drastic phase of Taylor's Epic Journey. In front of the whole tribe, he confesses to stealing the jars of food — but says Adam helped him do it. With melodrama worthy of a soap opera, he also reveals Adam's advantage.

"He can steal our loved one's visit," Taylor pleads. "That means someone is going to get their loved one ripped from their hands, even though you won."

It's time to vote. Throwing caution into the wind, Jay decides not to play his Immunity Idol. It's the right choice: Despite his best efforts, Taylor gets voted out, making him the second member of the jury.

Don't worry, Taylz — I'm sure Figgy would have been proud either way.