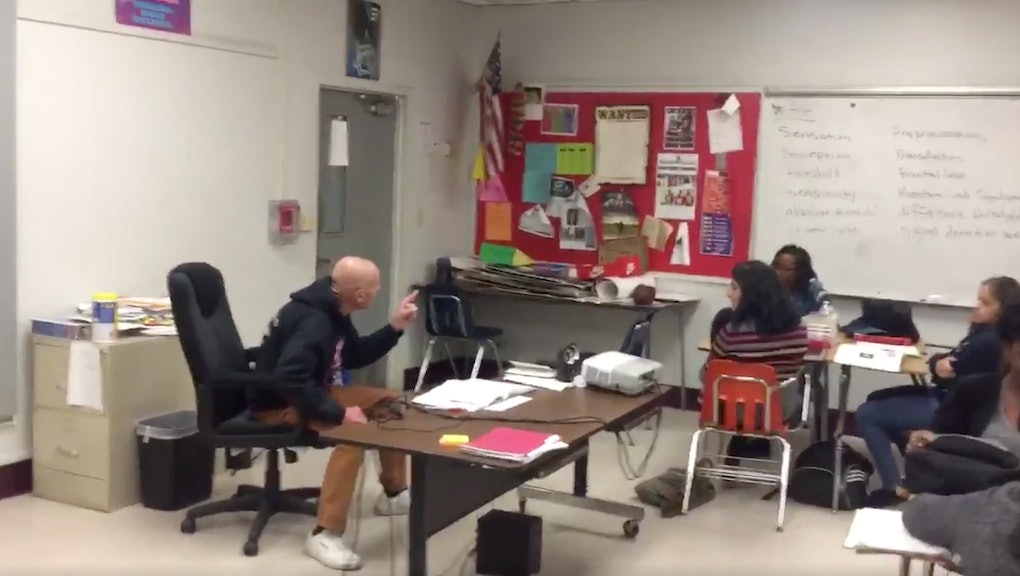 "I'm sorry that this is the way it is. It is fucked up," Colby said to her substitute teacher at the beginning of a viral video uploaded to Twitter Wednesday afternoon. "But white people control everything. And that's not fair."

Ghenelle Tiresias, who shot the video and posted it on Twitter, told Mic in a direct message that tensions in the school have escalated since the election of Donald Trump, and Colby was one of the few students to speak about it.

"The overall reaction in the classroom was just shock, because it escalated so quickly, but overall almost everyone was on the same page," she said.

According to Colby's next comment in the video, the substitute teacher said he didn't "want this to turn into a Latin country, because there will be too many Latinos."

Mic contacted Colby and is awaiting a statement.

When the substitute tries to deny saying that, several students respond in protest, saying "You just said that!" Several other students point out that he also allegedly said he wants to "preserve American culture."

The tenor of the conversation shifts a bit when Colby says the teacher is being "closed-minded" about racism in the United States.

When Colby accuses the teacher of being unwilling to accept the truth about racism, the teacher bursts out and says, "Why do I have to accept what you think is right?"

"You said white people have been in control of everything," Bubba begins. "Who is the president of the United States right now?"

The classroom erupts, and Colby stands up.

"With a white Congress, a white Senate, with a white everything else," she says. "He doesn't have the control of everything."

From there, the entire fight devolves into "who-called-who-a-racist" territory until the substitute teacher asks the student to leave.