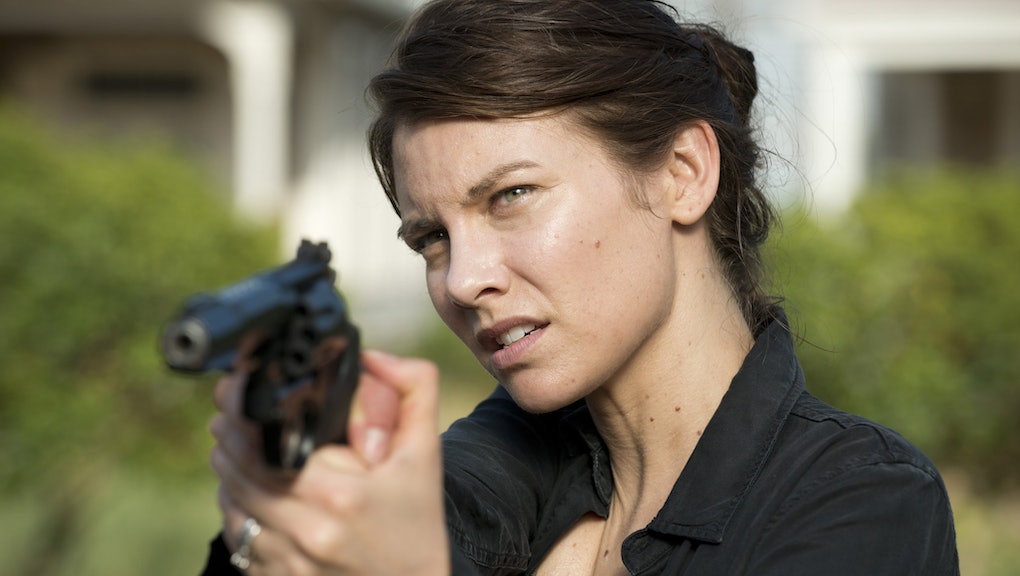 The Walking Dead hasn't checked in with Maggie since the season seven premiere — in other words, when she saw her husband Glenn brutally beaten to death with a baseball bat covered in barbed wire. Uh, is she OK?

Seeing Rick and the group create a faux grave for her when Negan visited Alexandria didn't exactly inspire confidence, but Maggie's doing well for herself at the Hilltop Colony. Season seven's fifth episode, "Go Getters," almost entirely takes place at Hilltop, presumably the last of The Walking Dead's ever-growing slate of post-apocalyptic communities we haven't seen this season.

Their chauvinist pig of a leader, Gregory, is — perhaps understandably — upset with Maggie and Sasha after Rick promised that his group could take care of the Saviors. Things evidently went awry, with Gregory fearing for the worst if Negan were to discover that the Hilltop helped conspire against them. He wants to kick a pregnant Maggie and Sasha out of Hilltop ASAP, but Jesus persuades him to at least let them spend the night (praise Jesus).

This is par for the course for Gregory — remember that lovely conversation he had with Maggie last season?

The precedent of kicking a pregnant woman out of a walled community is troubling enough, especially after Hilltop's doctor suggested that she doesn't leave the safe haven until the baby is born, just to be safe. But in Gregory's faults as a leader — he's a coward, refers to Maggie as "honey" and "dear" and literally can't remember a single person's name — viewers see how equipped Maggie is to be a leader. And if the show follows the comics, she will eventually be taking over Hilltop.

We get our first glimpse of Maggie's strength in "Go Getters" when she leads the community against a horde of zombies that make it through the gate. The Saviors busted the entrance and left a locked car with a speaker blasting inside the compound. While Jesus, Sasha and the other Hilltop members took out the zombies, Maggie ran over the car with a tractor to stop the music. Where was Gregory? Hiding in his room.

But Maggie doesn't necessarily try to force her way into taking over Hilltop; she's just doing a strikingly better job than Gregory. This is compounded in a terse meeting between Gregory and Simon, Negan's right hand man, and Trevor from Grand Theft Auto V avatar, in which Gregory tries to give Sasha and Maggie up to the Saviors to appease them.

It doesn't work — Jesus hides them in a different closet, so Simon thinks Gregory's offering them alcohol — and a disgusted, but still very well-groomed Jesus looks upon the sins of Gregory and deems him unworthy of leading the Hilltop. "Maggie and Sasha are staying," he adds. "I'm staying. We're all going to be one big, happy, dysfunctional family."

This doesn't sit well with Gregory, but as he tries to mansplain to Maggie how they should be dealing with the Saviors, she punches him in the face and snags Hershel's pocket watch — the one he initially gave to Glenn — out of his pocket (as if Gregory could be more repugnant, he stole the watch from Glenn's grave!).

"This is our home now, so you'll learn to start to call me by my name," she tells him. "Not Marsha, not dear, not honey. Maggie. Maggie Rhee."

It's the best scene of the show's seventh season that doesn't include an awesome CGI tiger named Shiva. More importantly, it also confirms Maggie isn't just destined to become the leader of Hilltop — her character's journey is the most compelling part of the dwindling series. While it's unclear if the leaked alternate footage of Negan killing Maggie was the result of The Walking Dead filming 11 different character deaths at the hands of the show's new villain or a narrative decision, it's evident the show can't afford to lose one of its few remaining characters that are genuinely worth investing in.

Rick's faults as a leader are apparent, and nobody should be signing up for the Ricktatorship anymore. Negan is a poorly written villain with horrible taste in music and a fondness for monologues. King Ezekiel is a touch too ostentatious and would anyone actually want to live in close proximity to a literal tiger? We're here for Maggie's takeover of the Hilltop Colony. She's the series' best leader, and with any luck, she's going to make The Walking Dead great watchable again.