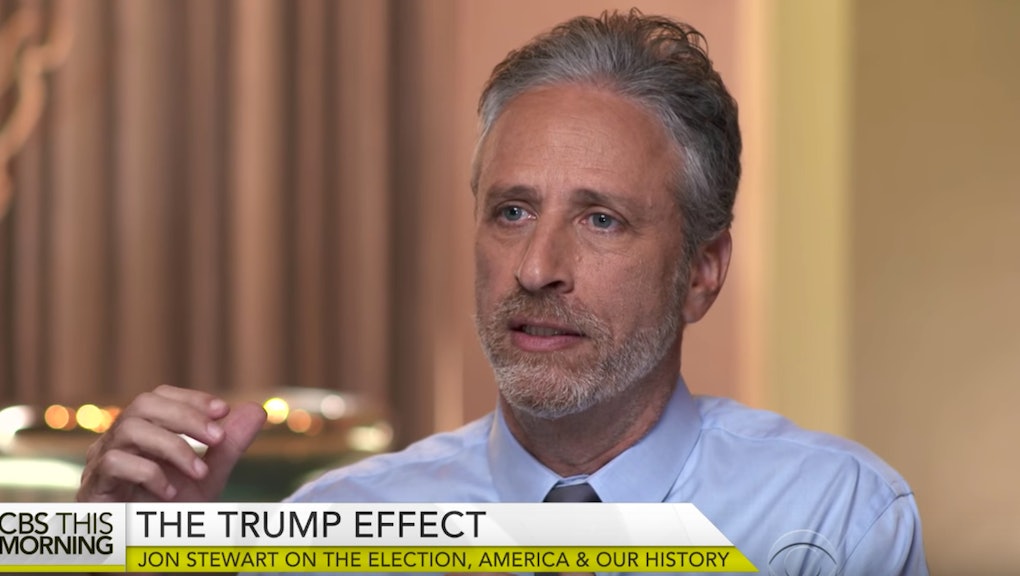 There's been a lot of important voices in late night who have offered sobering commentary on America after Donald Trump's unexpected presidential win, but there's a certain void left by Jon Stewart, whose place as America's satirical media conscience can't be emulated. The former Daily Show host has been mostly out of the spotlight since leaving the Comedy Central program in 2015 — though he did plea for Americans to vote with Stephen Colbert — but he offered his thoughts on the election results during an interview with CBS This Morning's Charlie Rose.

Stewart cautioned that people shouldn't assume that America is a radically different country than it was before the election. He also cited the Republicans' unwillingness to work with President Barack Obama will be a "come to Jesus" moment about the power of government, now that they have control of the Senate, House and the White House. But Stewart warns that Trump, our president-elect, isn't a Republican.

"Donald Trump is a reaction not just to Democrats, but to Republicans," Stewart says. "He is not a Republican — he's a repudiation of Republicans. But they will reap the benefit of his victory."

Stewart then examined the notion that supporters for Trump are racist, citing the logic as liberal "hypocrisy." He warned liberals for turning Trump voters into a "monolith" by describing all of them as racist.

"There is now this idea that anyone who voted for him has to be defined by the worst of his rhetoric," he explains. "There are guys in my neighborhood that I love, that I respect, that I think have incredible qualities who are not afraid of Mexicans, and not afraid of Muslims, and not afraid of blacks. They're afraid of their insurance premiums. In the liberal community, you hate this idea of creating people as a monolith. Don't look as Muslims as a monolith. They are the individuals and it would be ignorance. But everybody who voted for Trump is a monolith, is a racist. That hypocrisy is also real in our country."

Stewart's essentially saying that we shouldn't have an us-versus-them mentality with Trump supporters, though considering the spike in hate crimes that have occurred since Trump's victory, it's not exactly an easy task. But, per Stewart, it's our willingness to be multicultural that makes America great.

"This is the fight that we wage against ourselves and each other, because America is not natural," he concludes. "Natural is tribal. We're fighting against thousands of years of human behavior and history to create something that no one's ever — that's what's exceptional about America ... This ain't easy."

Watch a segment from Rose's interview with Stewart below: