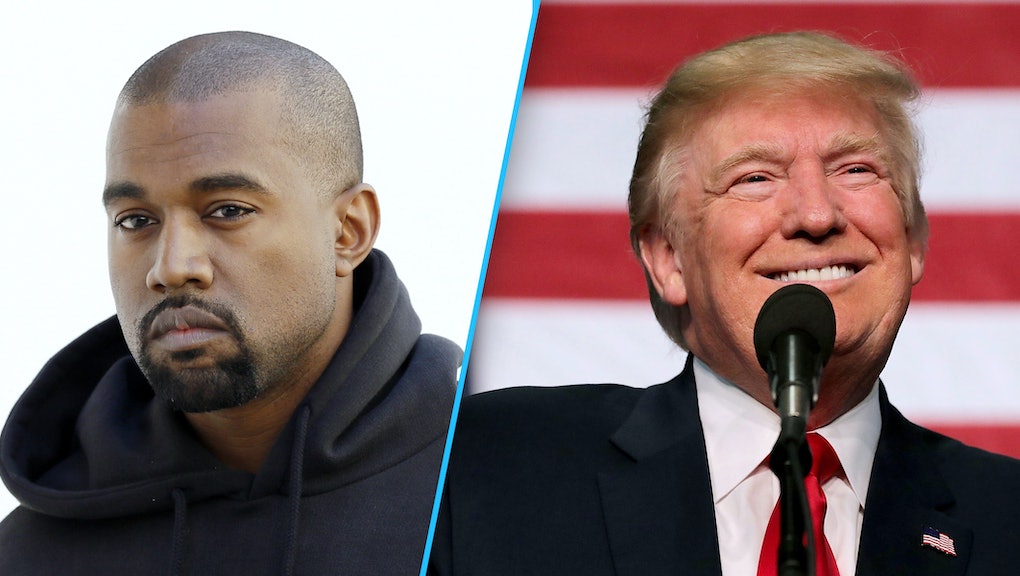 President-elect Donald Trump introduced the world to a very new style of running for the highest office in the country, using a combination of populist speech, bully tactics and doomsday rhetoric. It seems he's already found his first disciple: rapper Kanye West.

At a concert stop in San Jose Thursday night, Kanye West praised the president-elect and his "futuristic" presidential campaign.

"I told y'all I didn't vote, right?" Kanye said. "But if I would've voted, I would've voted on Trump." He continued: "I actually think that his approach was absolutely genius. Because it fucking worked!" West also threw Benjamin Carson onto this genius train, saying both he and Trump saw that people needed change and found ways to promise it in language they felt.

West enumerated on exactly what about Trump's campaign struck him as so genius.

"There's nonpolitical methods to speaking that I like, that I feel were very futuristic," West said. "And that style, and that method of communication, has proven that it can beat a politically correct way of communication. And I fuck with that."

The rapper also took aim at the way many Trump voters were being pinned as racist or misogynist, based on the candidate they chose.

"That don't mean that I don't think Black Lives Matter, that I don't ...believe in women's rights... because that was the guy I would've voted for," he said.

"Specifically to black people, stop focusing on racism," West added. "This world is racist, OK? Let's stop being distracted to focus on that as much. It's just a fucking fact ... Not one or the other candidate was going to instantly be able to change that because of they fucking views." It's an odd suggestion, considering West has rapped continually about racism and the many forms it takes throughout his career.

West's comments stand apart from the mass of celebrities such as Lady Gaga, El-P, Rihanna and Yoko Ono who all mourned the election results in their own ways. The full rant or visionary stream of consciousness or whatever you want to call it stretched over 10 minutes, with West promising again that he would run for president in 2020, running on a campaign of "empathy for the human race" dedicated to working with the "best of class." And when he does, he'll run his campaign exactly like Trump ran his own.

"Sometimes things that you might think are bad have to happen, in order for change to fucking happen," West said. "Sometimes you might have to not get your way to really understand what to do in the future, to be able to get your way."