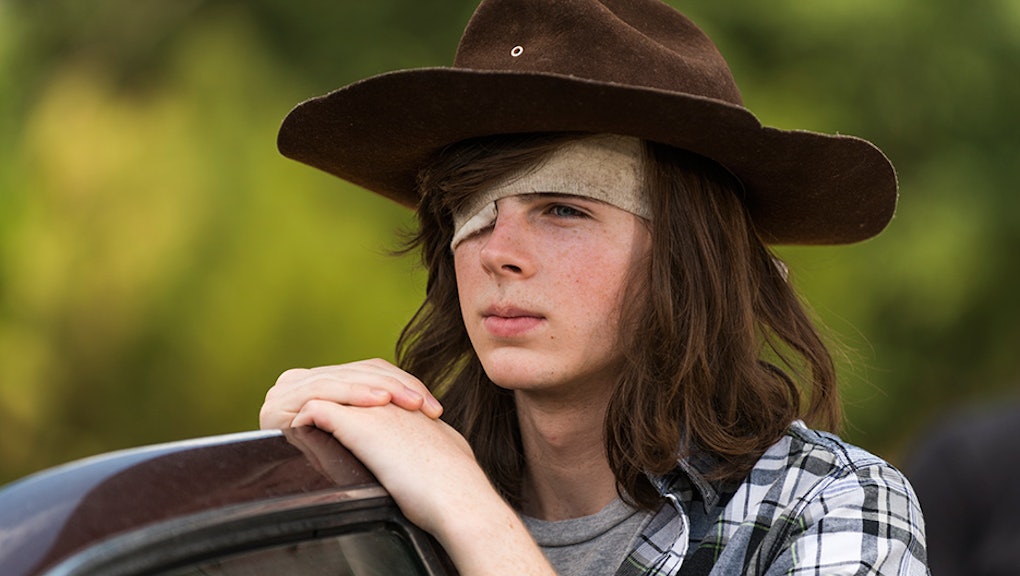 What will Carl do at the Sanctuary? Here's what we know from 'The Walking Dead' comics.

The TV adaptation of The Walking Dead has a decent amount of room to tweak the comic book's storyline. In fact, there have been quite a few deviations from the source material in the show's seven seasons. One of the biggest ongoing departures is Daryl Dixon, a beloved fan-favorite character (who really needs a haircut) that only exists in the show's canon.

He's a big part of the series — with fans promising to riot if he ever gets killed off — and it's with Daryl that one of the comics' most interesting storylines with Negan was seemingly diverted. We get our first glimpse of Negan's home, the Sanctuary, through Daryl's torturous imprisonment that includes eating dog food and listening to the horridly catchy "Easy Street."

It's a touch different from our first look at the Sanctuary in the comics, which we see through the eyes (or eye, to be painfully literal) of Carl "Coral" Grimes. But after season seven's fifth episode, "Go Getters," in which Carl sneaks onto a Saviors truck heading to the Sanctuary with Jesus, it looks like we'll be treated to some iteration of that storyline as well. So what exactly happens in the comics?

(Editor's note: Spoilers for The Walking Dead comics below).

Put simply, Carl just tries to start some shit. He guns down a few of the Saviors at the Sanctuary before he's subdued. Given Negan's distaste for how Rick and the group killed a ton of his people — leading to him killing Glenn, and in the show, also Abraham — one would assume he'd punish or kill Carl for doing so.

That doesn't happen. Instead, he basically takes Carl for a tour of the Sanctuary. It highlights the strange yet compelling relationship between Negan and Carl in the comics that the show hasn't really touched on yet. Negan is impressed by and respects Carl's toughness (remember: When Negan visits Alexandria in the show, Carl doesn't back down either). And while Carl goes along with Negan in the comics and assumes the mentee role, Carl consistently reminds Negan that yes, he still really wants to kill him.

So if Carl's trip to the Sanctuary takes a similar turn to the comics, it could set the foundation for the peculiar Negan-Carl relationship that still persists in the comics. Considering what Andrew Lincoln, who plays Rick, has said about season seven, it's something we ought to expect.

"I'm interested in the relationship between Negan and Carl, and Carl and Rick," Lincoln told Cinema Blend. "There's a very complicated, extraordinary psychology between those characters."

The big outlier in this narrative from the comics is Daryl's presence at the Sanctuary, as some Walking Dead fans have posited that Daryl could be taking Carl's place in a twisted relationship with Negan. But with Carl now making his way to the Sanctuary — plus, the Saviors aren't exactly treating Daryl well — it's still very much up in the air.

Whatever happens, we can safely assume both characters want to take Negan and the Saviors out, as most of the Alexandrians do.