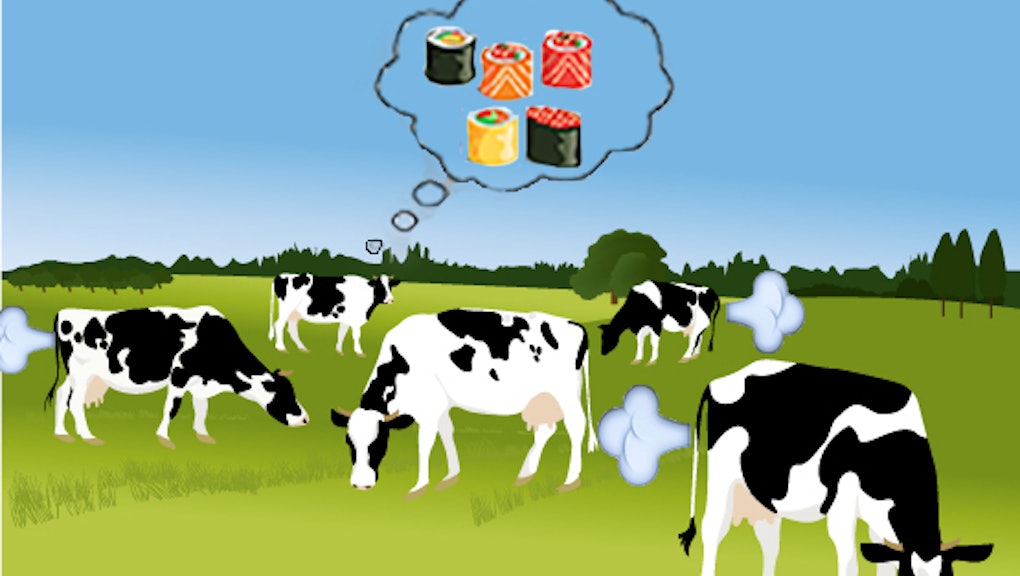 Cows' burps and farts speed up climate change, but a recent discovery from researchers in Australia could lessen the problematic cow gas and potentially reduce greenhouse gases by up to a whopping 99%.

Switching the cows to a special seaweed diet could have huge effect on the amount of greenhouse gas cows emit, The Conversation reported.

How cow burps and cow farts speed up climate change

Livestock contribute harmful methane during their digestive process — put simply: when they burp and fart. According to the Food and Agriculture Organization of the United Nations, animals like cows produce around 44% of "human-related methane" — meaning methane emitted from livestock bred for dairy or for human consumption.

Methane is considered to be 36 times worse than carbon dioxide over a period of 100 years.

Methane and other greenhouse gases are dangerous for our planet because they "act like a blanket" that insulates the Earth, the Environmental Protection Agency stated. Though methane has a shorter lifespan and leaves the atmosphere sooner compared to carbon dioxide, it also absorbs much more energy, the EPA noted, explaining that methane is considered to be 36 times worse than carbon dioxide over a period of 100 years. In other words: Methane from cow farts forms a strong (and stinky) blanket that could be catastrophic to our climate.

How seaweed could impact cow digestion (and climate change) forever

In a weird twist, this seaweed, known as limu kohu, is the most popular edible algae in Hawaii and can be found in many traditional poke dishes.

Will cows like the taste of seaweed? It doesn't matter, Rob Kinley, research scientist with Agriculture and CSIRO, told the National Post. "You put it in pellet form or mix it with molasses and they gobble that down," he said.

Kinley and his team have yet to test the seaweed on real cows, but they've seen promising results from feeding the algae to sheep. During preliminary testing, feeding seaweed to sheep resulted in an 85% reduction in methane emissions, the National Post noted. "[The seaweed] had been sitting around for a while so it had lost some of its potency, but it still worked really well at low levels," Kinley said. The next step: harvesting enough seaweed to feed large herds of cattle, he noted.

Environmentalists in the U.S. were optimistic but cautious about the seaweed diet.

"More agroecological research, which views farms as ecosystems embedded in landscapes and societies, is so urgently needed, especially for systems like beef production that currently have a big footprint,"  Marcia DeLonge, an agroecologist at the Union of Concerned Scientists, told TakePart.

If you're worried about your own farts heating up the planet — don't be. The methane emitted from the world population's farts is trivial, Brian Farley, a molecular and cell biology postdoc at UC Berkeley, wrote on Quora.

Snacking on seaweed isn't a bad idea for humans, though. Seaweed is a great source of iodine, a nutrient not found in many other foods, and iodine is essential for a functional thyroid.