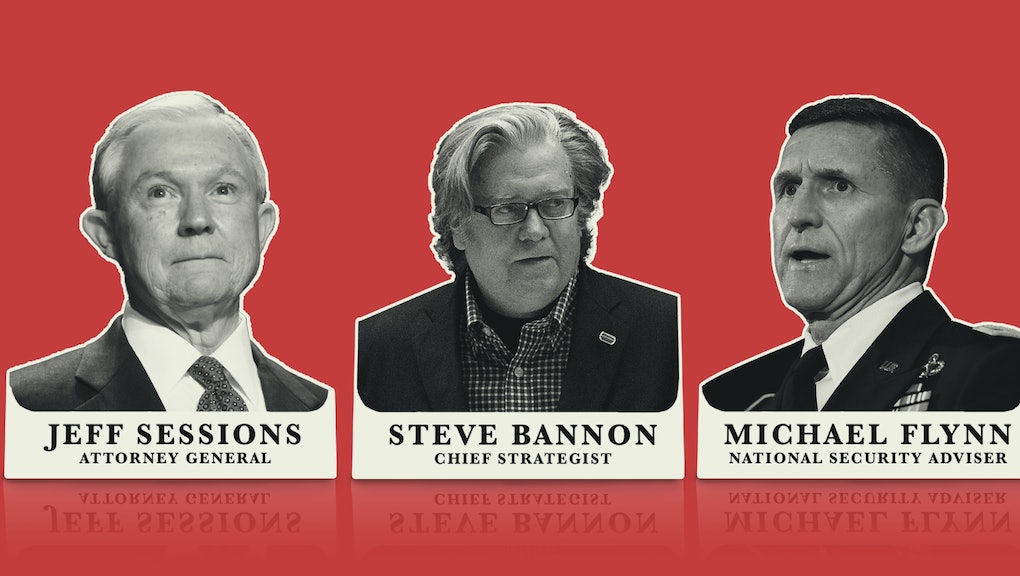 Donald Trump was the most openly bigoted presidential candidate the United States has seen in decades, but he was also the most pathologically dishonest, which made it hard to discern how much of this ranting was just talk.

We now have our answer: almost none of it. With three of his latest cabinet appointees, Trump has confirmed that racism and Islamophobia will be central in his administration and will be given vast institutional voice, power and resources throughout his tenure at the White House.

Here are the men Trump has tasked with shaping the future of the U.S. regarding national security, civil rights enforcement and overall presidential strategy thus far.

Bannon was tapped this week to be Trump's chief strategist. Though not an administrative position per se — or even a required one — this job will task Bannon with developing Trump's presidential "brand" and overall messaging.

We can surmise the influences Bannon will bring by looking at his past: He is the former editor of Breitbart, a right-wing news, opinion and commentary website that's been a key platform for the so-called "alt-right" — a loose but vocal network of white nationalists, misogynists and anti-Semites.

Breitbart employed Milo Yiannopoulos, the alt-right troll who was banned from Twitter earlier this year. Yiannopoulos famously led a racist and misogynistic harassment campaign against Leslie Jones, the black woman comedian and star of Saturday Night Live and Ghostbusters, which included publishing nude photos of the performer against her will.

The site, under Bannon, also featured headlines like "Hoist it high and proud: the Confederate flag proclaims a glorious heritage" and "Would you rather your child had feminism or cancer?"

Bannon himself was accused by his ex-wife in 2007 of saying he didn't want his daughter enrolled at the Archer School for Girls in Los Angeles because of "the number of Jews that attend," according to the NY Daily News.

In a 2015 interview, Bannon complained about the number of Asian CEOs in Silicon Valley, suggesting their prominence was somehow incongruous with American "civic society." He further implied that foreign-born students should go back home after attending school in the U.S. instead of starting companies here.

Flynn was director of the Defense Intelligence Agency under President Obama, but he was fired after two years due to clashes regarding his leadership style, CNN reported.

Flynn has openly stated his belief that Islam is not a religion, but rather a political ideology. In August, he referred to Islam — the practitioners of which comprise 1.6 billion people worldwide — as being "like a malignant cancer."

Flynn added in November that he's been "at war with Islam, or a component of Islam, for the last decade" via his work.

The influence this man will wield under a president who has already called for bans on Muslims entering the U.S., as well as a mandatory registry to track Muslims already living here, is a prospect worthy of concern.

On Friday, Trump selected Sen. Jeff Sessions (R-Ala.) to be his attorney general. In this role, the conservative junior senator will head the U.S. Department of Justice, which, among other duties, is tasked with enforcing civil rights legislation across the country.

At a time when the U.S. has been galvanized by police violence against unarmed black people in cities like New York and Ferguson, Missouri, the DOJ has assumed a central role in investigating these tensions. The department has launched multiple investigations into shootings where racial bias was alleged, and published two damning reports about police misconduct and racism in Ferguson and Baltimore, respectively.

We can confidently expect that to change now. With Sessions, the department will be led by a man accused of openly complaining about the Voting Rights Act of 1965, which placed heavy restrictions on Southern states that had a history of repressing black voting rights.

Sessions was nominated for a federal judgeship by President Ronald Reagan in 1986, but was rejected by the Senate Judiciary Committee because of the degree of his alleged racism. (That committee was controlled by Republicans, by the way.)

Among the other troubling positions attributed to Sessions is his description of two prominent civil rights groups — the NAACP and the Southern Christian Leadership Conference, which were instrumental in the civil rights movement of the 1950s and '60s — as "un-American" and "Communist-inspired," according to the New York Times.

Sessions has opposed immigration reform and efforts to reduce mass incarceration by cutting mandatory minimum sentencing. Before he takes the position of attorney general, he will have to be confirmed by the Republican-controlled Senate.