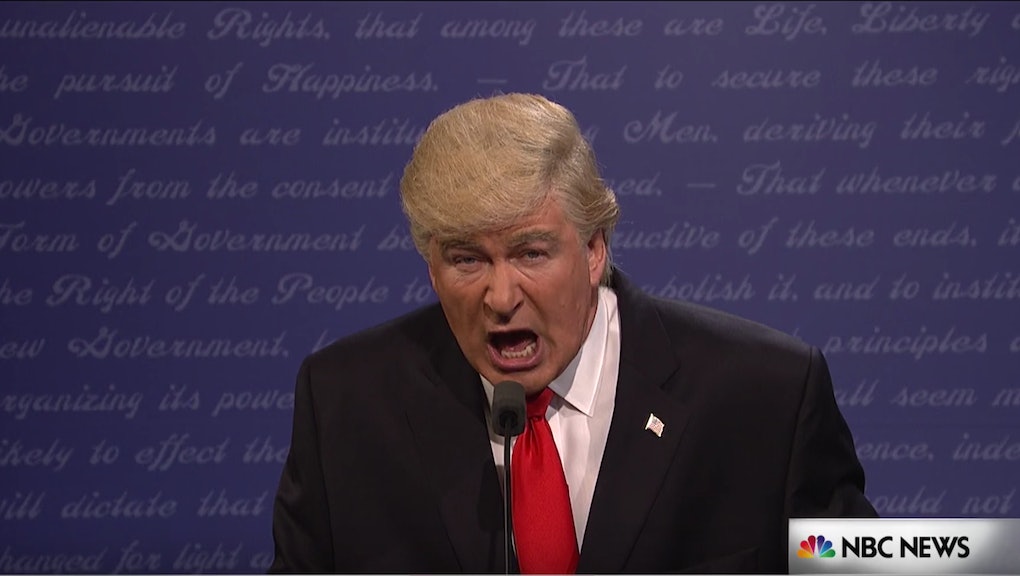 When Alec Baldwin returned to Saturday Night Live this year to portray Republican presidential candidate Donald Trump, he probably assumed he wouldn't hold the role for long, considering how many pollsters and political pundits predicted Hillary Clinton would win the election. That didn't happen, meaning we're getting at least four years of President Trump. But what does this mean for Baldwin?

For one more weekend, at least, we'll see the return of Baldwin as Trump. Speaking at the annual American Museum of Natural History's gala on Thursday, Baldwin confirmed that he would return as Trump, while explaining how often viewers should expect to be treated to his Trump persona.

"I'm going to do it again this weekend, but not all that often," Baldwin told Vanity Fair. "There was a lot of things online that was said about it — like why didn't I do it after the election? I was booked that weekend. Not even other jobs; we have things to do. It crashes every weekend."

In retrospect, it's rather fitting Baldwin's Trump didn't appear on SNL after the election results. It was more appropriate that the sobering and emotional cold open featured Kate McKinnon's Hillary Clinton singing the late Leonard Cohen's "Hallelujah." It was simple, succinct and exactly what we needed in place of Baldwin's bellowing (albeit entertaining) Trump.

While Baldwin's portrayal of Trump hasn't made the real estate mogul happy — he thinks the Baldwin imitation "stinks" — the rest of us welcome the satire. Baldwin, meanwhile, has said that he doesn't hate Trump, but he's "not somebody I admire" when speaking on The Brian Lehrer Show. "I almost sprained my jaw pushing my lower jaw forward to talk the way he does," Baldwin added.