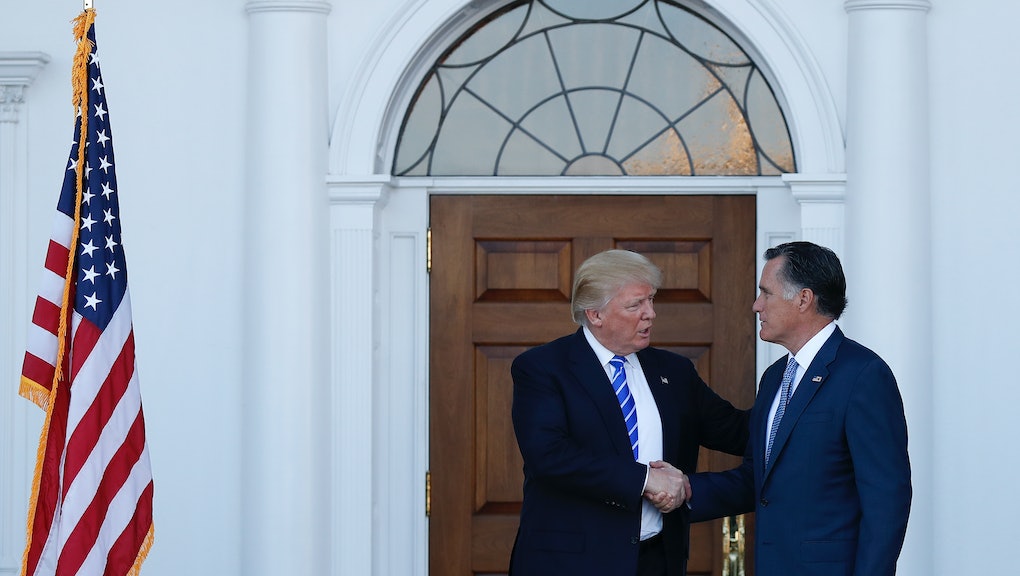 Mitt Romney, the former Massachusetts governor whom president-elect Donald Trump once called a "choke artist," is reportedly on the short list of possible nominations to assume the role of secretary of state, the Associated Press reported.

A day after Romney and Trump rendezvoused at Trump's golf course in Bedminster, New Jersey, Vice President-elect Mike Pence announced  that Romney was indeed "under active and serious consideration to serve as secretary of state of the United States."

The announcement, which occurred during Pence's appearance on CBS' Face the Nation, solidified for the first time that Romney, a longtime member of the Republican party establishment who once stood in vocal opposition to Trump's candidacy, had met with the president-elect on Saturday for a greater purpose than to simply bury the hatchet over things said along the campaign trail.

Both men characterized their 80-minute conversation on Saturday as a productive one that covered a wide range of issues, the Wall Street Journal reported.

"We had a far-reaching conversation with regards to the various theaters in the world where there are interests of the United States of real significance," Romney said of their meet.

Trump, for his part, has hinted that more of his cabinet picks could be announced on Sunday.

Other top picks for secretary of state reportedly include former New York Mayor Rudy Giuliani, former U.S. Ambassador to the U.N. John Bolton and South Carolina Gov. Nikki Haley, among others. General James Mattis, who also met with Trump on Saturday, is reportedly a hot contender for the role of secretary of defense.

Despite Romney's rising prospects for the secretary of state post, not everyone seems convinced that he's a shoe-in for the job. On Saturday, the New York Times published information from a senior Trump aide that the meeting with Trump was merely a chance for Romney to "kiss his ring."