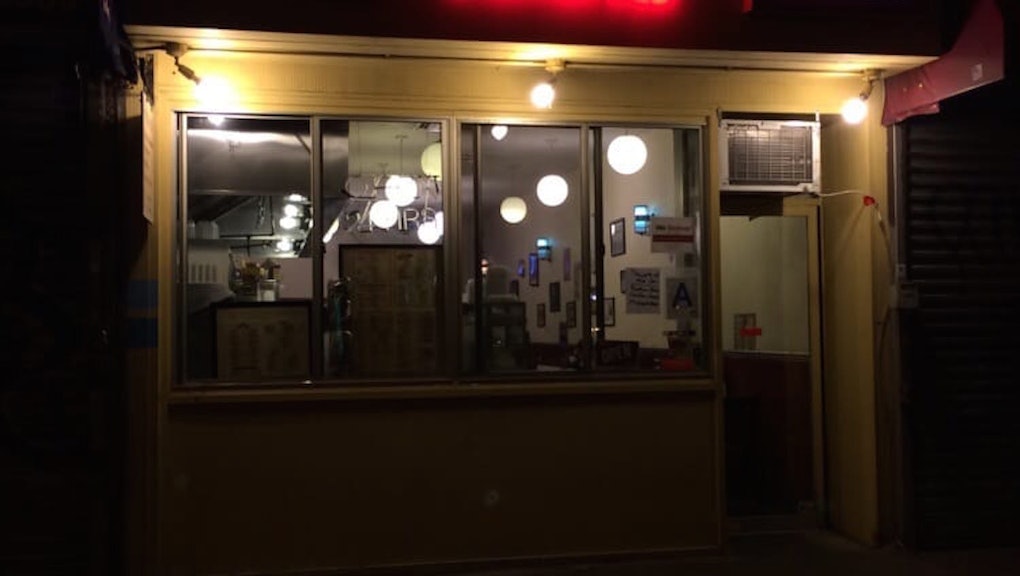 Since Donald Trump's presidential win, women and minorities have had all of their worst fears confirmed: that the president-elect's supporters would feel empowered to act on their racist beliefs in very real and dangerous ways.

My colleagues at Mic have spent the last two weeks reporting on the rise of hate speech and hate crimes throughout the country after Election Day. Swastikas have been spray-painted in parks. "Colored" and "whites only" signs have appeared above water fountains in a Florida high school. A Muslim woman was harassed in the street — someone had called her hijab a "disgusting piece of cloth" and tried to rip it from her head.

On Saturday night, I witnessed one such incident firsthand. Sitting in a diner called the Lower East Side Coffee Shop, my two friends and I watched as a man was arrested after telling two Asian women to "go back to Tokyo" and pepper-spraying a man who had told him he had "no tolerance for racism."

When we'd arrived at the diner, around 1 a.m., we were seated in a booth behind the two women, Sally Wen Mao and Jen Lue, who later told me they had just come from the Kundiman Gala Benefit, a fundraising event to support Asian-American art. Mao and Lue were the only other customers in the diner, save for the man sitting adjacent to them who was decrying the Hamilton cast's and audience's treatment of Vice President-elect Mike Pence Friday night. He'd been loudly sharing his opinions with one of the diner's employees for minutes on end when Mao asked him if he would please stop — they were just trying to eat their meal in peace.

But the man continued his tirade. Frustrated, Mao picked up her plate and went to sit at an empty table away from him, at which point I heard the man say, "They can go as far as they want. They can go back to Tokyo for all I care."

The comment was the last straw for Mao and Lue, Mao later told me, and they both began yelling at the man for his racist comments. The man responded by calling them "cunts," "whores" and "bitches," prompting Mao to throw water from her cup onto him.

"It might not have been the smartest thing to do in the moment, but I was really mad," Mao said in a phone interview on Sunday. "I've been in those situations before and in that moment it was already so raw what we were feeling — given the results of the election — so it felt like I couldn't just sit there and let him call me those names."

The man called the police and then physically blocked the front door, announcing that no one would be allowed to leave until the authorities arrived. I told the man that when the police came I would report exactly what I'd seen and testify for Mao and Lue, who were undoubtedly the victims in the situation — not him. My friends and I asked Mao and Lue to sit with us because we had all been genuinely fearful that this man, who was clearly angry and dangerous, would hurt them. While my friends and I sat, now sick to our stomachs and picking at our omelettes, we talked to Mao and Lue about what had happened, and, to put it simply, how fucked up the world is.

Lue told me, "We had been having a good night before this." That they had just come from an event celebrating Asian-American culture, she said, was "ironic" at best.

But Mao and Lue now had to worry about what would happen when the police officers arrived. Would they understand what happened? Would they believe their story? The two began discussing how they would have to "code-switch" when interacting with the authorities, a term that generally refers to the way minorities change their language and behavior to interact with people who might not share their identity.

For Mao this meant resorting to oppressive stereotypes of Asian women as "soft" and "weak."

Luckily, the officers had seen the situation for exactly what is was: a racist, misogynistic bigot verbally abusing two women, who had done nothing to provoke him. They told Mao that the man could not press charges against her for throwing water on him, despite his shouts of guaranteeing her a "criminal record."

After about 30 minutes time, Mao and Lue were able to safely leave the diner and go home. But before they did, another customer, who'd just walked in with two friends, asked Mao what had happened. She told him about the slurs the man, who remained in the diner, had hurled at her and Lue.

When the women left, the patron who had just learned of what had transpired turned to the man and told him simply, "I don't tolerate racism." The man didn't take well to this comment. "I wasn't being racist," he insisted. "I just told them to go back to Tokyo."

"We've been fighting against these things long before this election and it feels like a tidal wave has swept us back from all of the work we've been trying to do and the progress that we've made."  — Sally Wen Mao

I could sense things were going to escalate. Since we'd just received the bill I went up to the counter and threw some cash down begrudgingly, upset that I had to give my money to an establishment that had tolerated such bigotry. After all, none of the employees had intervened or even so much as told the man to stop. The waiter had continued to refill my water cup dutifully, as if nothing unusual were going on.

(When I reached out to the diner both Sunday night and Monday morning, no one was available for comment.)

At that moment, though, a lot of things happened very quickly: I heard shouts and then turned to see the man stand up, reach into his pocket and pull out pepper spray, which he sprayed directly into the eyes of the patron who had called him out on his racism.

I ran toward the exit and was pushed into the door and out onto the sidewalk by the man wielding the pepper spray, where, fortunately, the officers were still idling in their vehicle on the curb. My friends followed close behind, one of them having gotten some of the pepper spray in her own eyes as well.

And then we cried.

Restaurants are typically thought of as safe spaces where you can go, relax and enjoy a meal without incident. But following the presidential election, restaurants have become a prominent site of hate speech and harassment. On Nov. 11, three men outside the Wolfgang's Steakhouse TriBeCa, in New York City, allegedly told women walking by that they would "grab them by the pussy," echoing Trump's own words. The day after, a Trump supporter punched a woman in the face at Brooklyn's Bar Tabac after he heard she and her friend sharing their political opinions a few tables over from him.

In short, what I witnessed Saturday night wasn't unusual.

I messaged Mao on Sunday to tell her what had happened after she left and that, for what it's worth, the man who'd harassed her had been arrested. She told me she had sequestered herself in her apartment all day; she didn't feel like going outside, back into the world.

"I'm honestly exhausted and so many people are exhausted," she said over the phone. "We've been fighting against these things long before this election and it feels like a tidal wave has swept us back from all of the work we've been trying to do and the progress that we've made."

Mao, an author and poet, said now, more than ever, she plans on turning to her art to heal.

"I just remember the first time I felt okay after the election was after writing a poem," she told me. "It was painful to write, but it felt liberating that I could continue to make art." When Mao later read her poem at the Strand Book Store, she said multiple people had come up to her and thanked her for writing it, telling her that it resonated with them.

She said, "I feel like I have to keep going in spite of all of this."