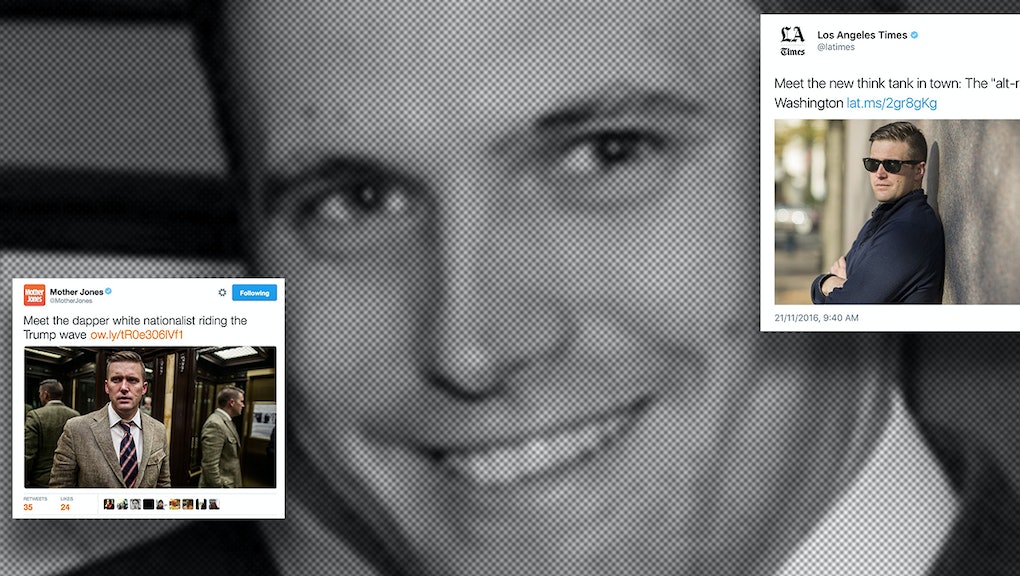 Neo-Nazis like Richard Spencer dress up their racism, and the media is taking the bait

Have you met the dashing new bachelor joining the Washington elite? The debonair wunderkind taking the capital by storm? Mother Jones introduced him as "dapper," and the Los Angeles Times framed his latest intellectual venture as the "new think tank in town."

Who are these reliable bastions of American journalistic tradition talking about? A neo-Nazi.

The subject of the Times story is the National Policy Institute, a white supremacist "think thank" led by Richard Spencer. Spencer's goal is to bring the racist ideology of white nationalism — the political idea that America should be fortified as a white nation — into the mainstream by dressing up typically abhorrent ideas in a suit and tie and selling it as serious discourse.

But the first step toward gaining public legitimacy is to attract media coverage that frames Spencer and his institute as a savvy group of political outsiders ready to disrupt the Washington, D.C., establishment.

Over the weekend, Spencer — who invented the term "alt-right" as a euphemism for white supremacy in 2008 — held a landmark post-election meeting of the NPI. The crowd was a mix of conservative writers, white nationalists and right-wing celebrities like Tila Tequila, the MySpace star turned neo-Nazi.

The goal of a think tank is to research and advance ideas. You've likely heard their names: Brookings Institution, RAND Corporation, the Council on Foreign Relations. Their experts are quoted in articles and appear on cable news when someone needs a respectable source. Many times, think tanks manage to draft laws and get them passed: The American Legislative Exchange Council, for example, is largely responsible for the proliferation of private prisons.

The studies published by Spencer's group give us a decent idea of one major strategy: to revitalize the widely discredited field of race science and prove that people of color are genetically inferior to whites — a major talking point white nationalists use to justify their dream of creating a whites-only nation.

The word "normalization" is thrown around a lot on social media, usually in the context of Trump's racist and xenophobic policy proposals for Muslims and immigrants. But Spencer is demonstrating how normalization actually occurs: by recasting ideas and behaviors typically not considered acceptable as part of the public exchange of ideas.

By donning a suit and calling Nazism "alt-right" or "white nationalism," Spencer is able to slip past the expectation that real Nazis — who we're used to dismissing outright — are jackboot thugs with bald heads and imperial eagle tattoos, as writer and Techsdale director Andray Domise pointed out on Twitter Friday.

"Our equation of racism with white poverty has conditioned us to become surprised when a well-groomed white person with money or nice clothes is racist or shills racist policies — as if white wealth and white racism were somehow at odds," Mic's Zak Cheney Rice wrote of white supremacist ploys for respectability.

Today, normalization can mean magazine-style profiles that cast Spencer as a budding intellectual whose time has finally come, as many people on Twitter pointed out to criticize the Los Angeles Times' flattering social media portrayal.

The time is ripe for this rebrand: Fellow white nationalist Steve Bannon recently scored a top position in the Trump administration. On CNN Monday, hosts discussed the question of whether Trump should denounce anti-Semitic supporters. (The chyron: "Alt-Right Founder Questions If Jews Are People.") The media appears to be taking Spencer seriously.

But what about his work? Tomorrow, this could look like a news anchor introducing a new "research paper" about racial IQ and skull shapes before cutting to Spencer as an "expert." If it gets to that point.