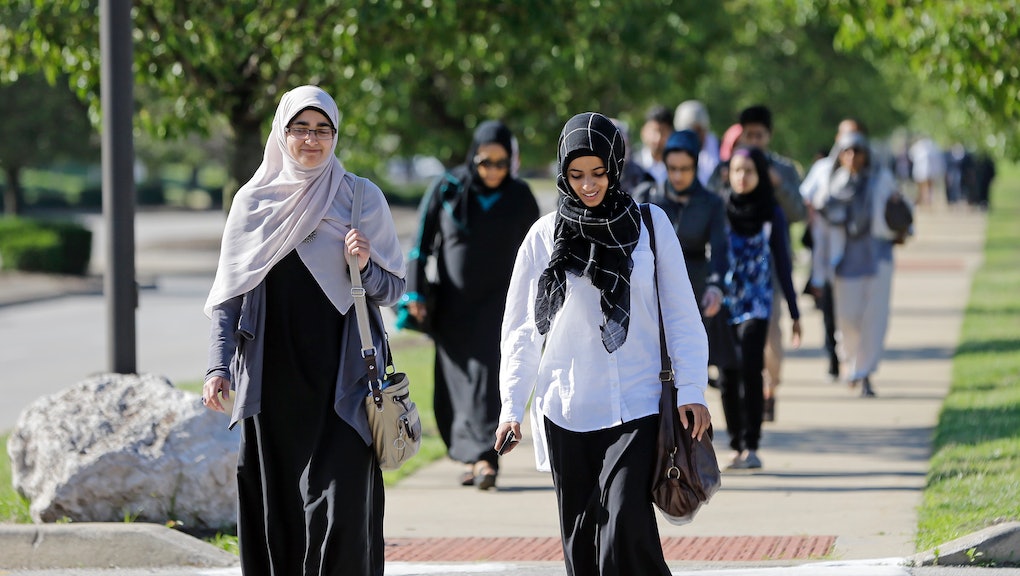 The letter was sent to Mic by Ahmed Rehab, executive director of CAIR-Chicago. Rehab said that CAIR has reported the letter to the FBI. In it, the author writes "Islam is to be feared and resisted," it also referred to President Barack Obama as a "half-assed negro," and "fascist Muslim dictator."

"Your comments about your fears for Muslims with a Trump presidency are unfounded," it reads. "You have had your guy in the White House for eight years. He has done as he promised in 2008 on Meet the Press: reduced the U.S. military to a 'level equal to that of our Muslim brothers.'"

"So it is QUITE ironic that you claim fear about Trump as president when we have just responded to 8 years of Islamic rule from a half-assed Negro, half-assed Muslim in the White House. No - you are NOT the victim. Sir: those who voted for Trump have been the victims of 8 years of rule by a Muslim fascist dictator, which is now over."

The letter also contained a threatening message of an impending civil war and the CAIR-Chicago chapter as the first target.

"When our next civil war comes, CAIR will be the focus of freedom-loving Americans, which you are NOT," the letter read.

Rehab said this was the Chicago chapter's first threatening letter since Trump's victory.

"This is a pattern that we are seeing right now with these sort of threats being sent to Muslims and other minorities," Rehab said to Mic in a phone interview. "Because we are seeing an emboldening of white supremacists and racists since the Trump election."

Rehab added they've received numerous threats through emails and on social media on a frequent basis. He also said that they tend to spike during election season and significantly whenever anti-Muslim rhetoric was espoused by Trump.

"Our concern is that it's open season, basically racists feel they reclaimed America and they are in charge and the rest of us have to bow," Rehab said.

The Southern Poverty Law Center has been tracking hateful harassment since Nov. 9, and as of Friday, the number of incidents has risen to 701 reports of election-related harassment and intimidation. Rehab said the headquarters of the Council of American Islamic Relations has received about 119 hateful harassment and threats since Election Day.

One other concerning aspect of the letter, however, was how fake news seemed to inspire the sender to write the threatening message.

The letter mentioned a case of an "8-year-old girl" in Idaho raped by a Syrian refugee child. The story, circulated mainly within alt-right, anti-Muslim blogs, claims that a 5-year-old girl filmed being raped at knifepoint by three Syrian children. One of the narratives, according to Slate, also claim the father of the boys "high-fived" their sons when they learned of the rape.

Despite it going viral on Facebook and within right-wing circles, local authorities have confirmed the story to be a hoax.

Rehab added these fake news stories could easily be proven false through simple fact-checking and source-checking. He also said he certainly believes part of the country's attitudes and reluctance in discrediting fake news has also contributed to the rise of Islamophobia and anti-Muslim hate crimes.