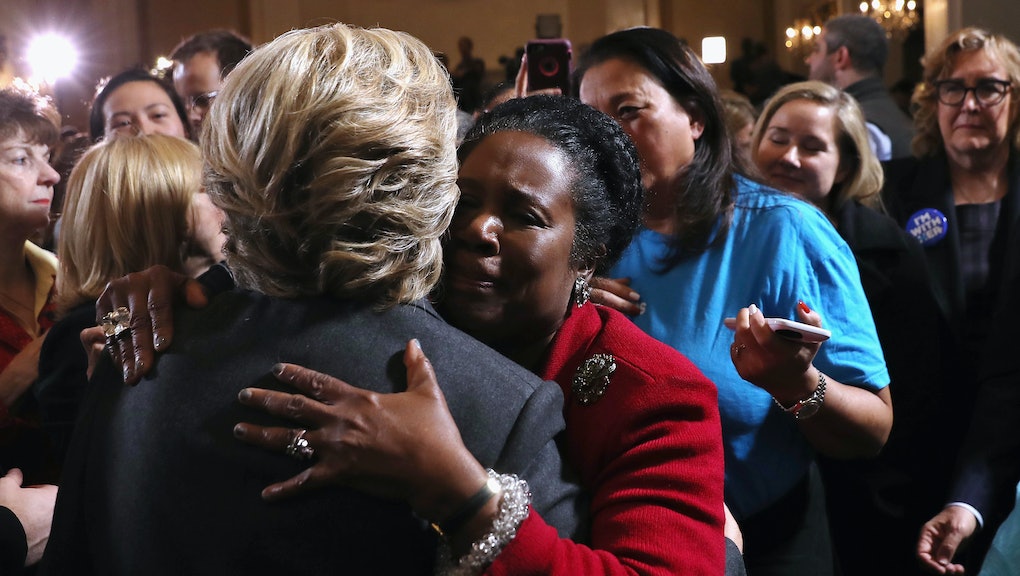 Pundits and observers have spent the last two weeks debating why Donald Trump won the election. Was it the "revenge of working-class whites"? A rebuke of the political establishment? Did racism motivate Trump voters?

The debate will go on for months as more information pours in. But at this early juncture, one of the most seductive explanations for Trump's win comes from Columbia University professor Mark Lilla, who published an op-ed Friday titled "The End of Identity Liberalism" in the New York Times.

Lilla's argument is simple: Democrats lost the White House because of their nominee's outsized emphasis on identity. Instead of focusing on issues facing all Americans, Hillary Clinton spoke directly to black people, Hispanics, women and LGBTQ people. This made white people feel "excluded" and ignored. The result, Lilla argues, was a mass mobilization of white voters.

"If you are going to mention groups in America, you had better mention all of them," he writes. "Fully two-thirds of white voters without college degrees voted for Donald Trump."

Lilla goes on to argue that "identity liberalism" — a term he doesn't clearly define, but seems to stand in for any politics that includes talking about issues facing specific demographic groups — has proven to be a failure. Identity politics, he writes, "never wins elections — but can lose them."

This argument is dubious on a number of fronts. For one, Hillary Clinton won at least 1.5 million more votes than Donald Trump, suggesting that not nearly as many Americans are put off by her "identity liberalism" as Lilla wants us to believe.

Donald Trump ran a campaign focused on identity, too. But it was white identity, the contours of which he sharpened with regular attacks on minorities. Trump described Hispanic and Muslim immigrants as existential threats to the U.S. He retweeted white supremacist social media accounts, and openly advocated for racist criminal justice policies targeting black Americans. So steeped was Trump's campaign in the rhetoric of white ethno-nationalism that it earned endorsements from the Ku Klux Klan and leading voices of the so called "alt-right." Trump has since filled key cabinet positions with white racists, Islamophobes and anti-immigrant hardliners. "Make America White Again" has become shorthand for Trump's campaign slogan, "Make America Great Again."

Commentators like Lilla take white identity to be the standard, while appealing to the concerns of minorities — and referring to these groups by name — is considered divisive, a surefire recipe for electoral failure. White identity politics, Lilla assumes, is the neutral, natural order of things.

But in reality, all politics is identity politics; it's just a question of whose identity is being represented.

Lilla further insists that Trump won because Clinton made "white, rural, religious Americans to think of themselves as a disadvantaged group whose identity is being threatened or ignored." The truth is that white people have never needed the help of "identity liberalism" to feel threatened. In fact, anxiety over eroding white power has been an organizing principle in American politics for more than 100 years. The Redemption period — a white-led backlash against Reconstruction starting in the late 1870s — was defined by whites terrorizing recently freed black Americans to discourage them from voting or running for office. Richard Nixon's 1968 presidential win is similarly seen as a rebuke against the Civil Rights Movement.

Minority communities have every right to expect that a presidential candidate will grapple with racial inequality head on. Black people, Hispanics and Native Americans still fall well below whites in arenas as diverse as education, wealth and incarceration, to name a few. But Lilla wants us to revert to shying away from race in order to win elections for Democrats while sparing white people's feelings. Bernie Sanders agrees. So do many pundits. The effect is a political approach that dismisses how racism organizes American life in favor of easier answers, like economic anxiety.

The comparison is fitting: many of President Roosevelt's programs excluded blacks.

Roosevelt's New Deal home loans through the Federal Housing Administration denied insurance to black Americans, cutting off a key avenue for building wealth and entering the middle class. According to the Atlantic, 65% of blacks were ineligible for the benefits when Roosevelt signed the Social Security Act into law in 1935. The fallout was so severe the NAACP called this social safety net "a sieve with holes just big enough for the majority of Negroes to fall through."

To resurrect this approach for the modern era would be disastrous for racial equity. If American politicians keep coddling white people and contorting their messages to soothe white sensibilities, American politics will be successful on precisely one front: making sure white people remain the focal point of political life.