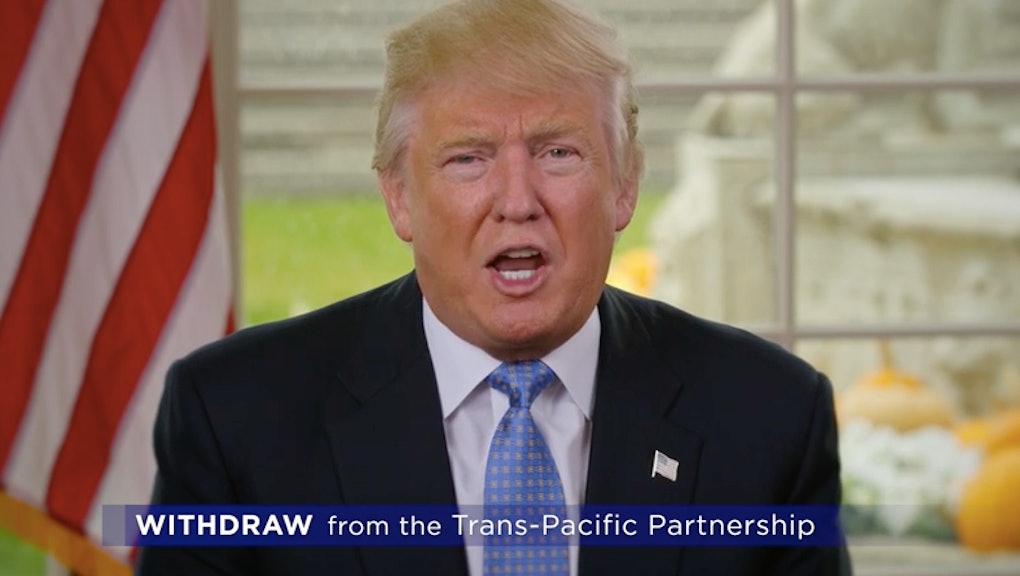 President-elect Donald Trump broad-brushed a picture of the first 100 days of his forthcoming administration in a new video Monday evening, saying he'd yank the U.S. out of a major trade deal, roll back energy regulations and rachet up investigations of visa abuses that "undercut the American worker."

"My agenda will be based on a simple core principle: putting America First," said Republican Trump, who takes the oath of office Jan. 20.

Speaking directly to the camera with an Oval Office-like backdrop featuring an American flag, the Manhattan mogul said one of his first orders of business would be to follow up on a campaign promise by issuing a "notification of intent to withdraw from the Trans-Pacific Partnership, a potential disaster for our country. "

The protectionist president-elect proposed to substitute "fair, bilateral trade deals that bring jobs and industry back onto American shores" for the TPP, a signature deal forged under President Barack Obama that binds the U.S. with 11 Pacific Rim economies.

He renewed his intention to "cancel job-killing restrictions on the production of American energy – including shale energy and clean coal – creating many millions of high-paying jobs."

It's a move sure to please industry titans and coal-dependent constituencies, but one that's already spurred pushback, including from the head of the federal Environmental Protection Agency.

Trump, who's in the process of selecting his top cabinet members and has already tapped retired Lt. Gen. Michael Flynn as national security advisor, said he'd ask the Department of Defense to craft a plan to "protect America's vital infrastructure" from strikes, including cyberattacks.

Following up on one of the campaign planks that catapulted him to a surprise defeat of Hillary Clinton this month, Trump said his first actions on immigration would entail asking the "Department of Labor to investigate all abuses of visa programs that undercut the American worker."

The president-elect made no mention in the video of taking specific action against Muslims, either via a travel ban or registry – something Kellyanne Conway, one of his chief advisors, did not appear anxious to discuss with reporters at Trump Tower in detail earlier Monday.

However, as the Topeka Capital-Journal reported, "A written plan for the Department of Homeland Security brought by Kansas Secretary of State Kris Kobach into his meeting with [Trump] spells out a desire to question 'high-risk' immigrants over support for Sharia law and the U.S. Constitution."

The promise comes even as Trump has been called out for having lobbyists on his transition team and also questioned on the separation of his duty as president-elect and his personal business interests.

Trump has been in days of marathon meetings at his New York and New Jersey properties as he crafts the team which will help him carry out his policies.

The president-elect will spend the Thanksgiving holiday at Mar-a-Lago, his Florida resort.