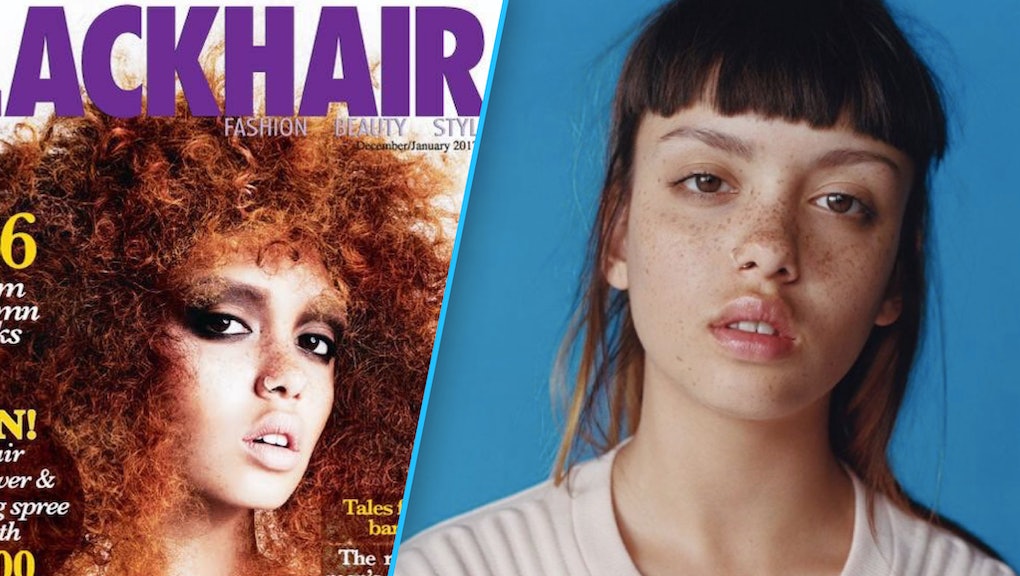 The British magazine Blackhair calls itself "the black woman's style bible," running stories like how to style curly hair for holiday parties, how to find the best hair salon for you or a roundup of the best afros from London Fashion Week.

On the cover of the December/January 2017 issue, a woman with what looks like a large red afro poses among headlines like "266 glam autumn looks" and "Tales from the barbershop."

But there's just one thing: The model isn't black.

This fact came to light when the model herself, Emily Bador, who describes herself as half English and half Malaysian, posted the magazine cover on her own Instagram on Monday. She told fans that the image was not used with her permission and that it was taken when she was 15 years old. She also apologized to black women specifically for taking this cover opportunity from a black woman.

"I would deeply and sincerely like to apologize to everyone for this, and black women especially," Bador wrote. "I would like to clarify, I believe this shoot is from when I was around 15 and didn't understand cultural appropriation or the impact it has on POC. I was uneducated, which obviously is no excuse, ignorant and immature. ... I didn't understand that shoots like this support the very Eurocentric beauty standard that the mainstream media focus on, which reinforce the idea that black features are only OK on white women."

"I didn't understand that as a white-passing woman I'd be praised for this hair, but if I was a black woman I'd be persecuted," Bador continued. "I didn't understand cultural appropriation. ... I do regret doing this. I hold up my hands, I'm so, so, so sorry and I'm very sorry this cover was taken away from a black woman. ... I'm upset and angry I was never asked by the photographer/hair salon/anyone if this image could be used for the cover [of] Blackhair."

After Bador's apology, Blackhair itself stepped forward with statements on its Facebook and Instagram accounts, admitting that it had no idea the model herself was not black.

"We often ask PR companies/salons to submit images for the magazine, specifically stating that models must be black or mixed race," the statement read. "We can only take their word for it, and of course, try to use our own judgment."

"At Blackhair we continuously strive to celebrate black women in all our beautiful variation of skin hues and hair textures," the statement continued. "We are only too aware of how black women are underrepresented in the mainstream media and the last thing we want to do is add to our erasure."

So far on its Instagram and Facebook page, the magazine's readers are split, with some wanting the magazine to pull this issue and others more understanding, especially given that the magazine stated it didn't intentionally put a non-black model on its cover.

"This mistake does not in any way, shape or form take away from the quality of the content," one commenter wrote on Facebook. "Well done to the magazine for releasing a clear and balanced PR statement, and let's not be discouraged by this. It shows that the infiltration of black beauty for mainstream consumption but not mainstream celebration runs deep."

Mic has reached out to Blackhair for further comment.