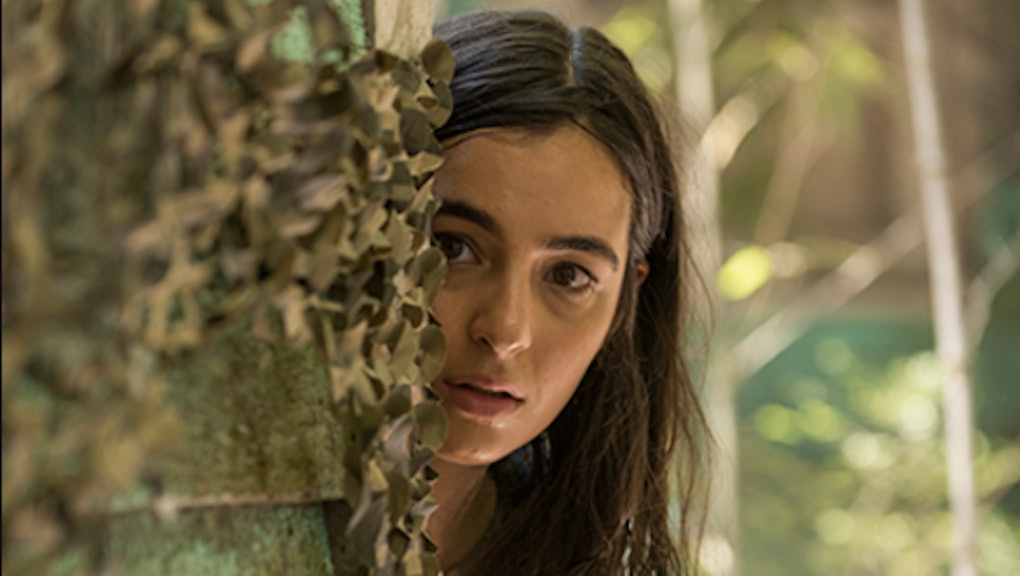 'The Walking Dead' season 7, episode 6 just introduced a new community from the comics

When world-building on a fantasy series is done well, most recently in Game of Thrones and its fictional Westeros, one reward for introducing several storylines is in the climactic, seemingly unexpected encounters between characters we didn't initially picture on-screen together. (Like the upcoming seventh season of the HBO series when Daenerys Targaryen and Jon Snow inevitably meet.) But when world-building isn't done right, well, take a look at The Walking Dead.

After six seasons almost exclusively following Rick's group — save for a couple of boring, Governor-centric episodes — the show has rapidly began to introduce new communities. There are potential allies to Rick and the crew in the Kingdom and Hilltop Colony, and a tangible, baseball bat-bashing threat in Negan and the Saviors. And then there's the mysterious group Tara stumbles upon, which we'll probably never see again.

The sixth episode of season seven, "Steal," follows Heath and Tara's trip to scavenge for supplies outside of Alexandria. How long has it been? By their metrics two weeks, but for the viewers it's been an eternity. They're still reeling from the murderous attack on Negan's outpost in season six (remember that?), and Tara unfortunately is still unaware that her love interest Denise was killed by Dwight. In fact, they don't even know that the Saviors are still around — they assume the group was wiped out at the outpost.

The good news: They've never had to deal with Negan's droll and cheesy monologues, or his bat Lucille. The bad news: They're also failing at their job of stocking up on supplies, which Alexandria sorely needs after their new arrangement with the Saviors.

Hoping to find supplies on a bridge enveloped in sand, Tara accidentally stumbles upon a horde of zombies buried underneath (AMC, bless their hearts, needs to find new ways to surprise us with zombies). In the ensuing chaos, we learn that Tara falls off the bridge and is separated from Heath, where she's discovered by members of a new community that reside by the water. While one member of the group, Cindy, wants to help Tara, it's apparently forbidden by the community, who are supposed to kill any trespassers.

Tara soon learns this for herself after waking up and scoping out the group, who almost kill her on several occasions before subduing her. But there's another striking trait of the community: It's exclusively women.

Now, the show could've introduced a fascinating, feminist spin to the post-apocalyptic community; perhaps, the zombie apocalypse version of Wonder Woman's home island, Themyscira. But there's a much simpler, and dull explanation from the group's leader. They too were working under Negan and the Saviors, and after a skirmish the Saviors killed all of the group's males that were over the age of 10. Then, the group relocated to an area by the water, hoping to never encounter the Saviors again — and similarly, why they will kill any intruders.

The group is never referred to by name, but we can assume this is the show's version of Oceanside, a community that begins trading supplies with Alexandria and its allies in the comics. Oceanside hasn't been seen in the comics — they're just mentioned a couple of times — and the group mainly trades seafood. But the move to introduce Oceanside this early is a curious choice by AMC.

Oceanside isn't brought up in the comics until after Negan and the Saviors are defeated, so throwing them into the narrative this early feels irrelevant. Plus, the comics' version of Oceanside is at least an ally to Rick and Co. by providing seafood; they're almost certainly not getting the same treatment on the show. Tara narrowly escapes death trying to leave the community — it's Cindy again with a friendly assist — but Cindy helps Tara on the promise that she doesn't tell anyone about Oceanside.

Tara looks to live up to that promise when she returns to Alexandria, and even after learning about the heartbreaking death of Denise, doesn't budge when asked by Rosita if she saw any weapons on her trip (Oceanside had a decent armory). In other words, The Walking Dead just spent an entire episode around a community we'll probably never see again, and has no important implications in the comics. We also don't know what happened to Heath, but the character's such an afterthought it shouldn't matter to most viewers.

It's a microcosm of season seven's biggest issue: The lack of a cohesive narrative. The show went from a narrow view of the zombie apocalypse from the perspective of Rick's group, to a slew of communities with their own distinct autocracies. This isn't necessarily a bad thing: The concept of exploring societies in a post-apocalyptic world is a fascinating premise. It's the execution from AMC that remains a disappointment.

The first half of season seven still has time to turn things around: Two episodes remain before we hit the midseason hiatus. But if there were any quite understandable concerns with the series after it bumbled the Negan introduction with a poorly conceived cliffhanger, much of season seven (sans the amazing Shiva in all her CGI tiger glory) won't inspire confidence.