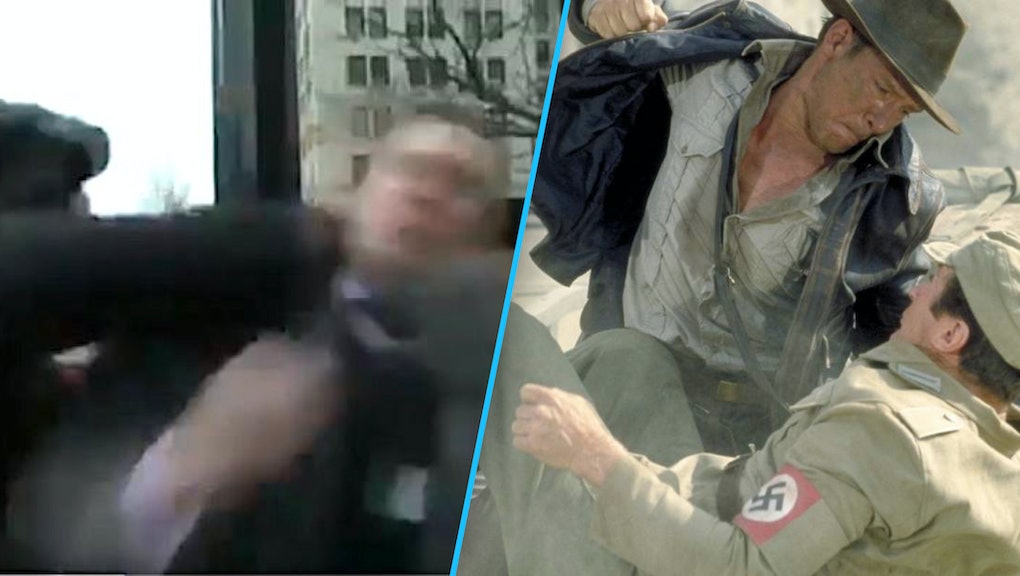 Is it ethical to punch a neo-Nazi? We asked the experts.

Tuesday, Jan. 24, 2017, 10:08 a.m.: On the day of Donald Trump's inauguration, Jan. 21, 2017, neo-Nazi activist Richard Spencer got punched in the face while giving an interview on the streets of Washington. The incident birthed uncounted remix videos — and questions about the ethics of running up to a notorious hate-monger in the street and, well, clocking them. In late November, Mic's Jack Smith IV put this question to a handful of ethicists. The original story appears below.

Neo-Nazis met in Washington, D.C., last week to celebrate Donald Trump's presidential victory and proclaim that their time has come. Video captured by the Atlantic shows the group using Nazi salutes and shouting "Heil!" to the president-elect's victory.

Punching Nazis, otherwise known as "fash-bashing," is part of a long, storied tradition of anti-fascist violence, carried out by communists, socialists and leftists wherever fascism has reared its head. Captain America did it. Indiana Jones did it. Even Geraldo Rivera did it once on his own talk show when a group of skinhead guests started brawling with other guests.

But is punching a Nazi ethical? More important, is it a viable way to stop fascists? Mic asked the experts: ethicists and academics who specialize in moral dilemmas and political activism.

The ethicists all agreed that no, punching fascists is neither moral nor ethical, even if it makes you feel better about the rise of the alt-right. They emphasized that anti-fascist violence often ends up empowering those regimes, and can be used as an excuse to expand fascist power — a trend that bears out throughout the history of anti-fascist violence from Benito Mussolini's Italy during World War II to Argentina in the early 20th century.

"Violence from opponents of fascist regimes usually gives more intense, overt power to that regime," said Nitzan Lebovic, the chair on Holocaust Studies and Ethical Values at Lehigh University. "In any of the cases I know, it plays right into the hands of the regime, and is used as an excuse to harshen the punitive measures against critics. It doesn't benefit those who are interested in democracy."

Lebovic, an expert on the history of fascism, insisted he did not want to comment on U.S. politics, as he's not a citizen. But he pointed to the worldwide history of anti-fascist violence, and said that in each case, violence against fascists prompted those regimes to become more violent and punitive.

The only time you can punch a Nazi

The only case in which punching Nazis is justifiable, according to ethicists, is self-defense.

"Things get a little bit more complicated when the question of defense arises," said Conor Kelly, a theological ethicist at Marquette University in Milwaukee. "So, while violence against another human being as a reaction to their opinions — even fascist ones — is going to be condemned as immoral, violence might be legitimate in response to violence from an 'unjust aggressor.'"

Kelly gave a list of criteria for self-defense based on Just War Theory, a Christian doctrine that draws on Saint Augustine and Thomas Aquinas. The first is a just cause, which means you're defending yourself or someone near you from violence. The next is that your motivation must be purely to mitigate the initial violence and defend the inflicted, not to cause harm. The last is proportionality, which means your violent response isn't more drastic than necessary.

Even then, the violent act would have to be the last resort. It's a high bar to clear, and Kelly, who believes that "pre-emptive violence cannot be legitimated" even for fascists, still advises case-by-case discretion.

In other words, the only case for getting physical with Nazis, or anyone really, is if that person is already attacking you or someone close to you.

What can you do instead?

The ethicists all agreed that there are other, more effective ways to fight back against fascist groups if they try to seize power in government. The most common suggestion was to call a spade a spade, and to name-and-shame Nazis and fascists when they — and their ideas — rear their head in public.

"People have to channel their nervousness into some kind of action," said Jeffrey Seglin, an ethicist at Harvard's Kennedy School of Government. "Free-floating anxiety doesn't solve anything. But holding someone's feet to the fire can be a way of shaming someone to do what's right."

Seglin said this strategy has shown itself to be effective, as it was when a mayor in West Virginia was forced to resign after a county employee called first lady Michelle Obama an "ape in heels." While alt-right figureheads seem impervious to public shaming, even the seemingly shame-immune Trump has been asked to denounce the alt-right and his KKK supporters on numerous occasions.

"If there's a policy of violence on the left, it'll escalate violence and potentially embolden the alt-right to attack with more than brass knuckles," said Elliot Ratzman, a Jewish social ethicist at Swarthmore College in Swarthmore, Pennsylvania.

Ratzman said he was worried that, if the left responded to the rising Nazi element in the alt-right movement with violence, it'd play into the alt-right's hands as viral videos of fash-bashing made it onto conservative media. Moderates would be alienated with the newly violent left, and the alt right would justify further violence as self-defense.

"The left, for the most part, doesn't take up guns or knives as part of their political strategy," Ratzman said. "And if you're dealing with a population that has a high instance of violent, mentally ill people or whose ideology is wrapped up with a promotion of violence, you could get people really hurt."

Ratzman added that protest and politics are still our best opportunities to counter fascism. After all, neo-Nazis have been holding yearly rallies and organizing online for decades. The reason racists are in the news is because their insidious views have entered our national politics, whether it's a former KKK grand wizard running for governor of Louisiana or retweets and speeches from our president-elect. It's through politics that they gain power, and it's through politics that they can be defeated.

"Violence denies the possibility that people can change or transition, as if they're essentially fascist and it's never going away, when we know most people shift political opinions with the right strategic engagement," Ratzman said. "Until then, they're people with terrible opinions and attitudes. And that's not going to change if they're greeted with violence."